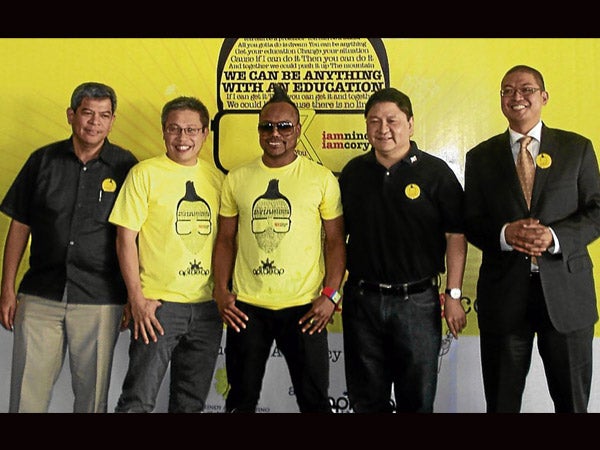 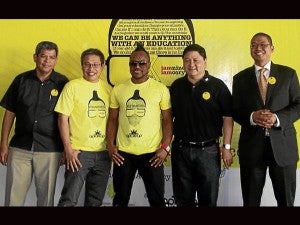 We’ve all taken our classrooms for granted at some point in our academic lives. More often than not, we’re guilty of using them just for sleeping, spacing out or cooling off during the hot, humid season. Little do we realize that not only are we blessed to have spacious, air-conditioned classrooms, we’re plain lucky to have classrooms at all.

For Allan Pineda Lindo Jr., more popularly known as Apl.de.ap of the Black Eyed Peas, those four walls represent more than just a venue for learning, but an avenue of hope and progress for his fellow Filipinos, where dreams are nurtured and eventually turned into reality.

That’s why, as the iamninoy-iamcory Movement’s new special ambassador for education, the global pop superstar is launching a campaign called “We Can Be Anything,” which aims to help reverse the education crisis by building more classrooms all over the country and by encouraging the youth to join him in his cause.

Sporting a yellow shirt with his quirky fauxhawked caricature in front, Apl shared why this campaign is close to his heart during a joint press conference with the campaign leaders, held recently at the Grand Sunset Pavilion in Sofitel Philippine Plaza.

“I was a kid from the Philippines [who] was adopted and brought to the US and given an opportunity,” he began, recalling his growing-up years in Sapang Bato, Pampanga. “There are millions of kids who aren’t able to go to school, or are really crammed in a small classroom… Especially in the provinces, most of them will never see a computer in their lives. I’ve experienced that situation, so it’s important for me to give back and never forget where I came from.”

The Apl Foundation, which he set up in 2008, has donated new learning areas to the schools in his hometown, among other things. The Ninoy and Cory Aquino Foundation (NCAF) heard about his efforts and thought he’d make a great champion for their cause. So, together with NCAF, Ayala Foundation, 57-75 Movement, Philippine Development Foundation (PhilDev), and a number of other organizations, Apl is now extending his dreams of helping his hometown to a far bigger realm.

Apl has pledged his support for various causes, like the Ayala Foundation’s MyLibrary project that involves building music resource centers in schools and municipalities, and the 57-75 Movement’s Bayanihang Pampaaralan initiative, which aims to build 10,000 classrooms in two years or less.

The movement also enlists the public’s involvement through “The Entire Nation (TEN) Moves” initiative, which encourages people to donate P10 a day for 10 months to build 10,000 classrooms. As iamninoy-iamcory Movement’s special ambassador for education, Apl provides a good example to its young members to become heroes of their generation by helping their fellow youth.

Of course, the Grammy award-winning music artist also makes use of the irresistible, unifying power that music has in making people sit up and take notice (and, hopefully, take action as well). The campaign was officially launched at the immensely successful Black Eyed Peas concert last Oct. 25 at the SM Mall of Asia Concert Grounds, where Apl hoped it would reach the ears and hearts of the Pinoy music-loving community. Plus, he’s released a catchy new single called “We Can Be Anything,” which can be downloaded as a ringback tone for a fee. Proceeds will go to the campaign.

The music video for the single, shot entirely in the Philippines, has begun airing in local TV stations.

“We can be anything with an education,” Apl’s campaign slogan reads.

“I really feel like we Filipinos are very smart people; the only thing we need is the opportunity, opening up the information to other kids,” he said.

A little effort goes a long way, whether it’s just downloading a ringtone or attending a concert or donating a few pesos for a good cause. “You never know what’s gonna happen—you might find the next Black Eyed Peas, the next Apl.de.ap.”

If he can help make a difference in other people’s lives in so many ways, so can we all.

How you can help

Visit www.wecanbeanything.com to find out more about apl’s campaign.

Download the song in your mobile phone as a ringback tone by texting “WECANBE” and sending to 2346; when you buy the song, the proceeds go straight to the campaign.

Join the iamninoy-iamcory Youth Formation Program, where you can learn how to be a modern Filipino hero through spiritual growth and leadership skills. Visit www.iamninoy.com or their Facebook page.