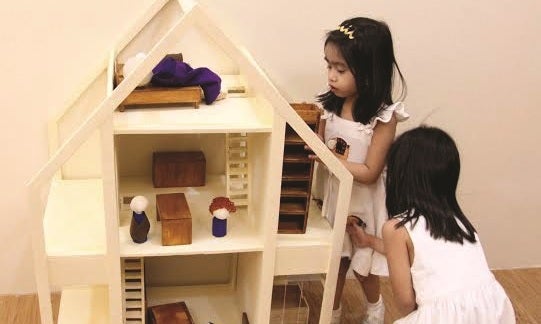 Learning is not just about reading and ingesting academic writings in preparation for a test. Teachers using the Waldorf pedagogical approach believe that art, music, dance, literature, mathematics and the sciences are best comprehended through experience.

Waldorf was developed by the Austrian philosopher Rudolf Steiner in 1919. A pedagogue, he was asked by the Astoria Waldorf Tobacco company to create a free school for its employees. The result was a unique curriculum that followed closely the threefold development of a child: willing (physical), feeling, and thinking.

Nurture Geist’s curricula focus on the physical development of a child’s first seven years. Children are allowed, under supervision, to practice their gross and fine motor skills. Waldorf believes that children should be taught based on their stages of development, and the first stage is the physical development. Hence, the three-and-a-half-day session exposes children to a variety of activities, such as jumping, running, throwing, picking up, and even baking, among several other exercises.

The school itself should be a homelike environment. There are no blackboards or whiteboards, no large ABC cutouts pasted on its walls, no school desks—nothing that resembles the rigid scholastic traditions. Instead, it’s a mise en scène conducive to creative thinking so that its playground and even its toys, all made from natural materials, are open-ended.

The dolls, for example, have no gender, faces or hair. “We don’t give them the impression that dolls should have long hair or big eyes,” said Rondina. “We let the kids imagine on their own. We have a large foldable frame that children can turn into a tunnel or a pool of sharks.”

Toys should have a variety of purposes, said Chenille Delalamon, co-founder of the school. Many of the plastic toys parents buy can only be played in one dimension. At Nurture Geist, toys become what the children imagine them to be.

And that is not a bad thing at all. While the teaching is focused on advancing a child’s physical development, the mind is not neglected. In baking class, for instance, where children mix and knead flour, the experience teaches them the concept of flour turning into delicious bread. There is no disconnect in learning a word and understanding what it means.

“A concept is foreign to a child until s/he experiences it,” Delalamon said. “And when they experience it, they retain the information much better than they do when they just read off the text. They do not just learn numbers; they know that one is more than two.”

The concept of up and down, big and small, and even the food chain is taught in songs and movement. Children pick up their toys after playtime with singing. After just a couple of sessions, children automatically pick up their toys and store them away as soon as the music starts playing.

“They have so much fun in class that parents often tell us that children want to come to school on days when they’re not feeling well,” Rondina said.

There are also advantages to the mixed ages. Since the school accepts children aged two to seven, the older children become more responsible as the younger ones often seek them out for help or advice.

Report cards run like narratives of their child’s development. If parents have specific concerns, teachers focus on those.

All teachers have a background in special education, so they are trained to handle difficult situations, such as children biting or pulling other children’s hair.

With parents now both working, children are often left to the care of their “yaya.” While there’s nothing wrong with setting down rules for the nannies to follow as long as they are assured these are actually followed, Rondina said many parents feel that children need to spend their time being productive.

Nurture Geist, she said, is addressing a demand similar to day care but backed by Waldorf philosophy.

Classes at Nurture Geist start June 8, with options to enroll children in the morning or afternoon sessions, or the whole day (nap time included). Visit Nurture Geist on Facebook and Instagram, or follow on Twitter for updates.