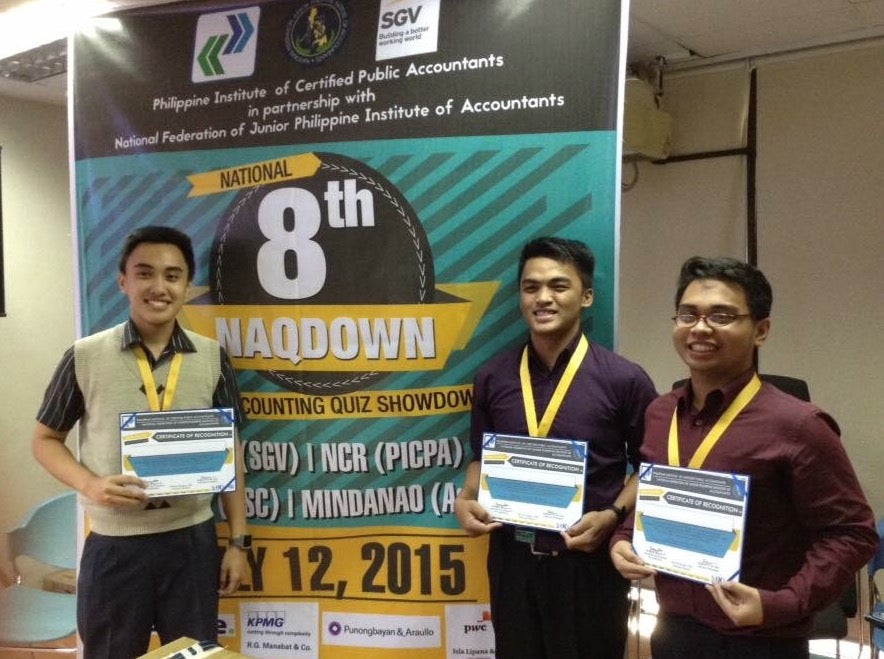 ONE OF the pioneering courses offered by Far Eastern University (FEU) is Bachelor of Science in Accountancy. The school has produced top placers in the Accountancy Licensure Exam of the Professional Regulation Commission.

Three promising “FEUture” accountants proved yet again the school’s expertise in the field when they landed in three of the top five spots of the 8th National Accounting Quiz Showdown (Naqdown) last July 12. In this contest, it’s rare that a champion and two runners-up all come from the same school.

Jejomar Concepcion, the competition’s overall champ, says, “Accountancy is not a sprint, it’s a marathon.”

He believes that at the end of the day, it doesn’t matter who comes first or last, but rather how much you endured and sacrificed to reach the
finish line.

“I was born neither good nor intelligent,” he admits. He says he frequently failed math quizzes in elementary school, and being scolded by teachers had become part of his daily routine.

However, what changed his perspective was his family. Realizing how his parents sacrificed so much for him, he decided to work doubly hard. “What intelligence couldn’t complete I made up for with diligence,” Concepcion claims.

He never thought he’d win
Naqdown. “We were about 60 participants, all prepared and all geared up, so the chance of me winning was so small,” he recalls.

He prepared by reviewing his notes and handouts and consulting professors on areas that confused him.

All these efforts were towards one goal: to bring glory to the school and win. After all, nobody competes to lose. “I capitalized on my strengths, tried to improve and allotted a bigger portion of my time to my weaknesses.”

Naqdown second placer Titus Roland B. Tagaan says, “I don’t believe that we should be masters of all things. There just has to be one.”

Though Tagaan has nothing against “jacks of all trades,” he believes that one must focus on one’s field of
expertise.

This “accountancy geek” has joined organizations that enhanced his skills in accountancy. “I was the vice president for accountancy in my previous school, and I was also the business manager of FEU Advocate, the official student publication of FEU,” he says.

“During the quiz, I wasn’t thinking of winning. I was only thinking of God—that all of these are for His glory. In other competitions, I didn’t win because I was thinking of the prize. This time, I thought, ‘all for God,’” he admits.

By lifting everything up to Him, Tagaan said everything else followed, and he felt more fulfilled because God was his companion throughout the event.

Tagaan adds: “I just love accounting so much, which is why my grades reflect my dedication to my studies.”

He was also the recipient of an award in “The Tax and The Furious 7,” a competition on taxation.

“Do you still sleep?” This is one of the most frequently asked questions of accountancy students, who spend long hours studying for endless quizzes and exams.

For third runner-up Irish Paul Reyes, one should never forget that his brain needs to rest no matter how hard he works. “Never ever deprive yourself of sleep; even just six hours will do. You are human, not a machine.”

While most people need compliments to boost their self-esteem, Reyes has an interesting approach to increasing his confidence. “Anything can motivate me, as long as it brings me down. When something pulls me down, I am motivated to push myself up, and go even higher than where I was before,” he says.

Delegates from De La Salle Araneta University and Polytechnic University of the Philippines-Manila landed third and fifth places, respectively, in the competition.

Concepcion, Tagaan and Reyes will advance to the regional elimination round in Davao in October.