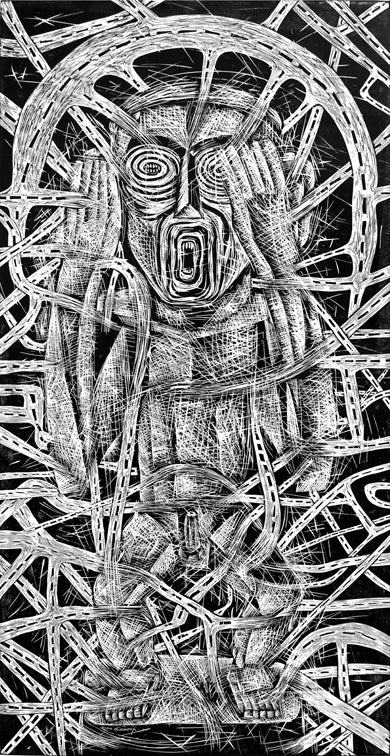 GALLERIA Duemila presents Inima III, an exhibit of prints by Baguio-based artist Leonardo Aguinaldo. “Inima,” is Ilocano for hand-pressed. He shows activism through striking black and white woodcut and linocut compositions, which seemingly resemble tattoos. The pieces that portray imposed industrialization in the Cordilleras.

“Madonna,” featuring paintings by BenCab, can be seen at the Print Gallery.

Shows are on view until Oct. 4.

The paintings are a visual biography that tell of Gabito’s life so far as a young artist.

With his trademark ornate aesthetic, Sy continues to articulate the flux of identity in a cross-cultural milieu. A Chinese-Filipino, Sy illustrates the apparent yet tolerated dysfunction arising from such diverse heritage in satirical fashion.

Simultaneous exhibits at Mabini are Jose Luis Singson’s “Suspension of Disbelief.” Both shows run until Sept. 11.

“Renaissance,” an exhibition on textiles runs until Sept. 12, at the Tall Galleries of Metropolitan Museum of Manila.

Renaissance presents a broad spectrum of textile pieces that reflect on a sense of worldliness and interconnectivity with distinct cultures and localities. Traditional designs, weaves and processes from communities of common folk are refocused for contemporary adaptations.

Exhibit gathers different artists and curators from Asia, South America and Europe to promote interconnectivity and unity of cultures through textile arts, crafts and fashion,

‘In Transit’ at CCP

“In Transit” is a multimedia group exhibit that runs until Sept. 20 at Bulwagang Fernando Amorsolo (Small Gallery) at Cultural Center of the Philippines.

Exhibit looks into the creative process and the relationship between visual art and music.