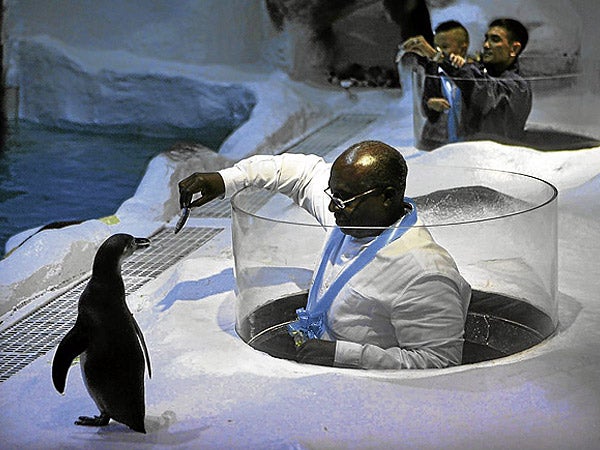 RARE BIRDS. American Ambassador Harry Thomas entices a penguin with fresh fish at the Manila Ocean Park’s Trails to Antarctica walk-through exhibit on Friday. It features nine Humboldt penguins, the only ones in the country, which can be viewed through a glass wall by guests. Behind is presidential nephew James “Bimby” Aquino Yap being held by a security man as they try to catch the attention of another penguin. LYN RILLON

It is like going to Antarctica—except that the penguins are eating galunggong.

The Manila Ocean Park can now boast of housing the first-ever and only penguin habitat in the Philippines—and to be there is to be near the coldest, driest place on the planet.

At Friday’s launch of the “Trails to Antarctica: The Penguin Quest,” visitors were treated to four educational walkthrough zones, the main attraction of which being the first and only live penguin exhibit in the Philippines.

On show were nine South American penguins captive-bred in Germany.

The “tropical” Humboldt penguins were presented in a habitat closest to their own, complete with nesting burrows, a rocky shore, and an indoor pool to allow them to frolic undisturbed in the water, while giving the public a view of their natural antics.

Among 18 known species of penguins worldwide, Humboldt penguins actually live in warm and dry climate off the Pacific coastlines of Chile and Peru.

The penguins were flown in three months ago from Germany, where they were captive-bred.

“We got the penguins from a breeding facility in Germany,’’ Jappy Lim, Manila Ocean Park program development specialist, told the Inquirer. “We usually get our marine life attractions from breeding facilities. In keeping with our policy of environmental protection and conservation, we do not take animals from the wild.”

Lim said they chose to exhibit the Humboldt penguins because they can withstand warmer temperatures better than their counterparts in the Antarctic and are more “tropical.”

At the Ocean Park, a cool temperature of 21 to 22 degrees Celsius is maintained at the penguins’ habitat.

At the launch of the marine theme park’s newest attraction, Manila Mayor Alfredo Lim expressed excitement at having a close look of the penguins, which he noted are read and seen only in books and magazines by school children.

“We are going to Antarctica without boarding a plane.  Without paying so much, Antarctica has been brought here by the management of Manila Ocean Park,” Lim said.

US ambassador to Manila Harry K. Thomas Jr. said the exhibit made his dream come true. He vowed to encourage his compatriots to visit the country and view the exhibit.

Thomas said the park was on the right track in educating the young about environmental protection and conservation.

“We are all children today,” the ambassador stressed, adding that through the exhibit, everyone could learn about Antarctica, the penguins, the environment and what people need to do to take care of resources.

“I will very, very much encourage all American tourists to come here and take their families,” he said.

Bimby was there, too

Trying to call the birds’ attention, the boy kept on shouting, “Hey penguins!”

Asked how he liked the penguins, Bimby said with a smile, “The penguins were good to me.”

The penguins ignored all the attention given them by their gawking, smiling visitors. They continued to frolic and swim in the water, once in a while taking galunggong off people feeding them.

Sometimes, they would stare at a person standing near them, showing no sign of alarm, before waddling away towards the water.

Another attraction on the Antarctic trail is a 42-meter snow slide, the “Slide O’ Fun,” touted as another first in the Philippines. It is said to be the country’s longest ice slide.

The Snow Village replicates a typical Antarctic community, where visitors can frolic in the snow in a room kept at subzero temperatures.

Armi Cortes, park vice president for sales, said that the “Discovering Antarctica” portion of the exhibit hopes to “awaken the sense of adventure and the thirst for discovery and exploration of everyone.”

Featured in the exhibit are the early beginnings of Antarctica, its diverse wildlife, scenery, and the continent’s significance to science research. The park also hopes to showcase Antarctica as a region that would help unlock the future of humanity and of the entire planet.