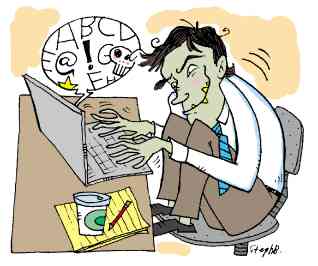 Confessions of a troll

William (not his real name) belongs to a relatively new species of media practitioner—the professional troll.

That is to say, he is a salaried employee of a legitimate public relations outfit whose job is to run social media campaigns for various clients.

Of course, his job designation doesn’t say “troll”: he could call himself a “social media marketing consultant,” among other things.

But a large part of his job involves engaging in internet trolling.  And while trolling isn’t the only weapon in his arsenal, it’s proven a very useful one.

A troll is, of course, someone who goes online to pick a fight, for whatever reason: to push a political agenda, to dump on someone he or she dislikes, to vent on a topic he or she feels strongly about, or very often just for the “lulz” (laughs).

In recent years, however, trolling has come to dominate public discourse on social media.

Go online and there’s no avoiding the spectacle of “Dutertards” spitting venom at their real or imagined mortal enemies, the “yellowturds” and vice versa, each drowning out any kind of rational discussion of the issues with the sheer volume (in both quantity and noise level) of their spew.

It’s now generally accepted that social media was a critical factor in deciding the outcome of the last election. What is less clear is why, even after Rodrigo Duterte’s decisive victory at the polls, the online war between his die-hard supporters and more vocal critics hasn’t abated.

If fact, it seems to have heated up even more as pro-Duterte keyboard warriors transition seamlessly from campaigning for him to attacking any and all who dare criticize the newly-elected president or his policies.   In particular, Sen. Leila de Lima, the Liberal Party and “traditional media” have been singled out as favorite targets of this troll army.

It’s not only in the Philippines where the social media has turned increasingly toxic.

A recent Time magazine cover story titled “How trolls are ruining the Internet” paints a depressing picture of how social media has been overrun by hatemongers of all stripes, from cyberbullies to misogynists, body-shamers targeting fat or unattractive people to racist neo-Nazis and anarchists who are just doing it “for the lulz.”

Could trolling be the new modality for social control?

As analysts have been telling us for years, social media is the new battleground for the hearts and minds of the people, and as in any war, the first casualty is the truth.

In the Babel that is the internet, it is becoming increasingly difficult to sift fact from fabrication in most online exchanges.  In the wild and woolly world of the social media, any assertion, no matter how far-fetched or outlandish, seems to gain traction as soon as enough people “like” or “share” it: This is what is known as “feeding the troll.”

Someone even came up with an acronym for the content that is increasingly finding its way into the social media: DRUMS—

disinformation, rumors, untruths, myths and smears. Repeated and retweeted often enough, DRUMS can pass for the truth to all but the most critical and analytical minds.

As a functional illiterate when it comes to social media, I was blissfully unaware of most of this.

But as the boundaries between the digital world and “real life” become fuzzier, I feel a nagging sense of dread that, sooner or later, this online negativity would begin to impinge on my world, whether I’m logged in or not.

In order to catch me up on what’s what in this new frontier, I decided to go straight to the source: William the professional troll.

William’s career started quite innocuously a few years ago when he first went on Twitter.

“I became famous on Twitter,” he says, so famous that his feed soon had enough followers for him to be considered an “influencer.”

“You need to have a lot of followers before you can become an ‘influencer,’ like at least 50,000,” he explains. “Influencers are people who set trends on social media. Normally, it’s about artists, celebrities and their fans. But you can make anything trend as long as you control the influencers.”

Because of his online credentials, William was hired by a well-known public relations agency for its social media marketing operations.

Eventually, he says, he became the team leader of a network of influencers.

“We collected as many famous people on Twitter as we could, and we started trending.”

“It’s just like advertising,” he says. “We’re pushing certain brands, and not in a subtle way, through our Twitter posts. And if you have enough posts on Twitter with the same hashtag, it will trend.”

There is a dark side to all this online manipulation, however, and that is trolling.

“In the American context, trolling is getting people riled up and pursuing an argument by posting comments,” he says. “But in the Philippine context, trolling only happens when there’s something like a presidential campaign. That’s the only time trolls become visible as an organized group.

“Philippine trolls are like the Dutertards—aggressive, angry, looking for an argument. And that’s the very nature of a troll—

you want to argue, you want to convince people even if you have to lie and fabricate things.”

In short, trolls are there to push an agenda, to propagandize.

William got into trolling in earnest when his firm was enlisted by the camp of one of the candidates in the last presidential campaign. At first it was just like brand marketing, creating a buzz around the candidate, building up his “brand” and his image.

“It’s an organized effort,” he says. “The publicist makes a communication campaign plan.  The plan sets the agenda, the objectives, the messaging—

what do we want to say?  How do we convince others to agree with us?”

As the campaign heated up and the candidates started duking it out in earnest, troll tactics became increasingly important.

William worked in one of several clusters scattered throughout the country, headquartered in a suite of rented rooms.

It was set up like a call center operation, he says. Each day, the team leader would put up a board on which was listed the most recent posts with the most “likes” and “shares” which had to be responded to. The appropriate response—carefully worded by the team’s designated writer

—would likewise be put up on the board. And the “keyboard warriors” would start posting responses to the targeted posts, usually by merely copying and pasting the prepared response.

Social media is a numbers game, and each keyboard warrior used several dummy accounts to make their posts.  Some attention is paid to creating believable online personas and back stories for these accounts, says William, from the generic “concerned netizen” to “struggling OFW,” for instance.

“The real accounts are submerged by the trolls,” he says.  “If I’m a troll and you are a legitimate commenter, and I convince you to fight for my cause, you become one of my keyboard warriors, as well.  Even if you are a real person with a real account, if we convince you, you become part of the organism. You become a servant of the ideology that these fake trolls have injected you with.”

William’s experience does nothing to allay any fears the more conspiracy-minded among us might have.

“It’s social media mind conditioning,” he says. “Our public relations firm was working with a psychologist—a famous psychologist from UP. He really knows how to mind-condition the people, how to make lies seem like the truth, fabricated stories into fact. And the trolls spread it like rumor or gossip.  You inject it into the real accounts, the real accounts will believe you and spread it to other people, and so on.”

“It’s like ‘The Matrix’—you don’t know who’s real and who’s not,” he adds. “Unless you’re a very good identifier.”

One way, he says, is by engaging the suspected troll.

“Most trolls can’t argue—that’s one of their weaknesses,” he says. “Most of the time they can only copy-paste ready-made statements to synchronized topics; they don’t really have the minds to argue with you.”

You can also configure your Facebook or other social media account to filter out or block obvious trolls.

If that sounds like a lot of work, you can simply unplug, but that won’t really change anything. In fact, says William, business for professional trolls is likely to boom.

“Whoever is planning to run in 2022 should invest now,” he says. TVJ

Keep Your Social Media Troll-Free With These 6 Steps