In the light of ‘La Santa’ | Lifestyle.INQ ❮ ❯ 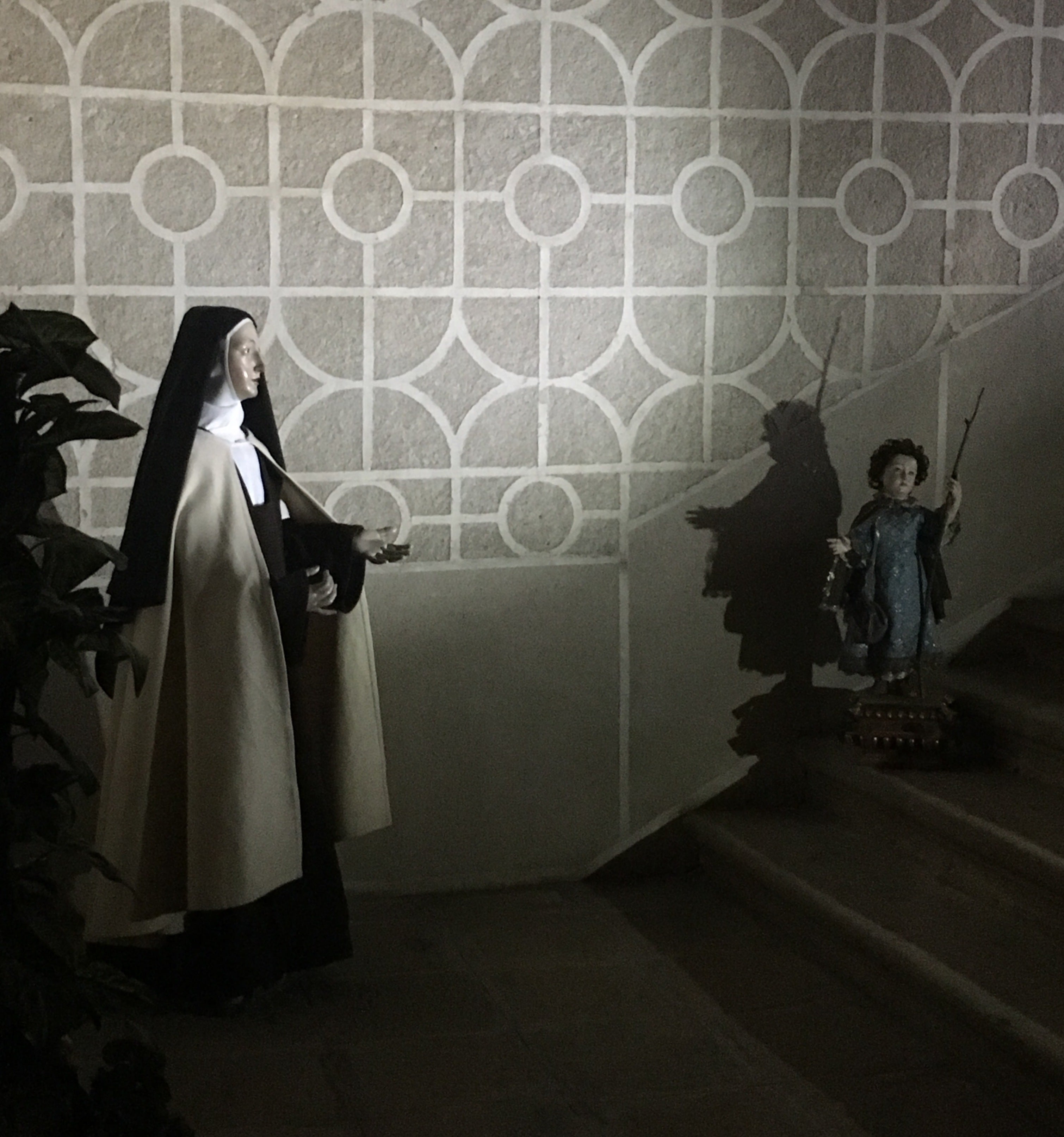 In the light of ‘La Santa’

I almost missed seeing a rather strange relic of Teresa de Cepeda y Ahumada, widely known as St. Teresa of Avila, during a visit to her hometown in Spain.

It was probably because the Sala de Reliquarios, where relics of the saint are kept, is a nondescript space behind a gift shop next to the Convent of St. Teresa. No altars, no entrance fee, no big spotlights, no finery. Enshrined in glass is Teresa’s middle finger, still wearing what looks like an emerald ring, but already fragile and decomposing.

It’s morbid but fascinating, an appropriately dramatic memento from the life of a woman who, despite being born privileged, used those hands to work, establish a more spiritually rigorous order of nuns, and write up a storm—enough to have her declared the patroness of writers and the first female Doctor of the Church.

But I’m getting ahead of my story.

A couple of years back, I had grown interested in learning about the female Doctors of the Church: Teresa of Avila and Catherine of Siena, both named by Pope Paul VI; and St. Therese of Lisieux, declared so by then Pope and now St. John Paul II. (A fourth, the little-known Hildegard of Bingen, was added in 2012 by Pope Benedict XVI.)

Teresa was the trailblazer.

The difference in the writing styles of Teresa and Therese is interesting, although Therese was a follower of the older nun who founded the Discalced Carmelites. While Therese’s famed autobiography, “The Story of A Soul,”  is written in a simple, innocent style, Teresa is opinionated, wry and sometimes—if you’ll pardon the expression—bitchy, making her all too human and absolutely engaging.

“The Book of Her Life,” Teresa’s autobiography, has been studied by several church scholars, who all concluded that she wrote fast, and hardly edited her words.

Born in Avila in 1515 and placed in a convent at a time when convents were virtual finishing schools—the nuns even held dinner parties!—Teresa rebelled against such frivolities and founded a new order. She became a mystic who saw visions and levitated, experiencing conversations with God as well as her famed transverberation, when an angel pierced her heart with divine love, sending her into a much-documented ecstasy.

She traveled all over Spain, expanding the order, and, in 1582, died of a long-time illness with her boots on, in between long journeys.

I was recently given the opportunity to visit Spain, and that’s how I found myself awestruck in front of the famed 11th-century medieval walls surrounding Avila one November morning. The first watery snow, what the Spanish call aguanieve, had just fallen in this city in western Spain, in the region of Castile and León.

The walls, the murallas, are Avila’s most extraordinary feature, easily the main reason the city was declared a Unesco World Heritage Site in 1985. Winding some 2.5 kilometers  around the old city, with an average height of 12 meters and thickness of 3 m, they beg to be climbed, and, fortunately, they can be.

One can stroll for about an hour or 1.7 km around part of the perimeter of this remarkably preserved joint effort of Christian, Muslim and Jewish workers living in the city centuries ago, defending their turf against marauding Moors. One blessed, cold morning, I was almost all alone, following the wall as it adapted to the topography of the land, climbing up towers and down brick staircases, relishing the views, and feeling history in every stone.

Two of my favorite places, however, are intimately tied to the life of Teresa, affectionately known to the locals as La Santa (the Saint). First is the aforementioned Convent of St. Teresa, built on the birthplace and family home of the saint and now the residence of the Discalced Carmelite Friars. One is welcomed by a haunting statue of the saint sitting on a bench outside the church, lost in prayer.

Inside the church and to the left is her actual birthplace chapel, dominated by a beautiful statue of the saint by Baroque sculptor Gregorio Fernandez, depicting her in grief after a vision of Christ being scourged at a pillar.

Beside this small, glittering chapel, behind glass, is the room where Teresa was born, with a comfortable red four-poster bed and a washbasin. The announcement written by her father Alonso is visible above the scene: “…Teresa was born, my daughter, at 5 o’clock in the morning, give or take a half hour… It was this very Wednesday, almost at dawn.”

The authenticity of the setting leaves the viewer in reverent silence.

And then there is what may be the best Teresian museum in Avila, at the Monastery of the Incarnation, where she lived for 30 years, three of them as prioress. For the inexpensive entrance fee of 2 euros—a little over P100—I got to see important, genuine relics from her life.

There are the original doors and floors she walked through upon her arrival at the monastery in 1535, at age 20. Various pieces of furniture in the sunlit room—chests, chairs and tables—were actually part of the dowries the nuns had to bring when they entered the religious life, a practice Teresa changed.

In a special place near the stairs is the armchair St. John Paul II sat in for the centenary of Teresa’s death in 1982; he called the monastery “a shrine of contemplative life and a place of great mystical experiences.”

In this place, Teresa had several religious experiences, including her transverberation. One particularly haunting tableau, visible through glass, recreates Teresa’s meeting with a little boy on the stairs of the convent. The child asked, “What is your name?”

The boy answered, “I am Jesus of Teresa.”

Also seen through glass is the very room the saint lived in as prioress, featuring a simple loom where she liked to work. On display nearby is a wooden block she used as a pillow, towels she embroidered, letters in her own elegant handwriting.

The realization that these objects were actually touched by this amazing woman was overwhelming.

And then, a whimsical piece: a statue of St. Joseph known as “the Tattletale Joseph,” because Teresa allegedly sat him in the prioress’ chair when she left for travels—and the statue would tell her everything that happened in her absence. Novices were naturally stunned that the prioress always knew everything! No wonder Teresa had a lifelong devotion to the saint.

Walking around Avila can tire out the pilgrim traveler, so to feed the body as well as the spirit, I can recommend two places in this city of excellent restaurants.

One is 5 (Cinco), a restaurant being pushed by fans for a Michelin star, and featuring modern takes on traditional favorites by a young Lisbon-educated chef named Pedro Gonzalez Matos. I walked in with no reservations for lunch, the first customer, and Pedro served me a wonderful meal, including appetizers of trout and salmon with mustard and honey, a delicious cream of carrot and cardamom soup, and a steamed piece of cod (bacalao) atop flavored mashed potatoes and a roasted pepper mayonnaise.

The other place is a local favorite, the traditional Meson del Rastro, decorated like a hunting lodge and serving the local specialties: patatas revolconas (mashed potatoes cooked in pork or chorizo oil), a wonderful judias de El Barco de Avila (white beans simmered in chorizo and tripe), fresh trout, and a heavenly flan.

As in most of Europe, wine is cheaper than water, so I enjoyed a beautiful jerez (sherry), the sweet Pedro Ximenez, and a good old copa de rioja (glass of red wine).

When I need inspiration to write a story, I now clutch my favorite souvenir of my visit, a small, silver pendant of St. Teresa holding her quill and journal.

When I have bigger problems than words, however, I remember her most famous prayer: “Let nothing disturb thee; let nothing dismay thee; all things pass; God never changes.”

Avila may have changed through the centuries, but its landmarks remain strong and steadfast—just like the monumental faith of La Santa.