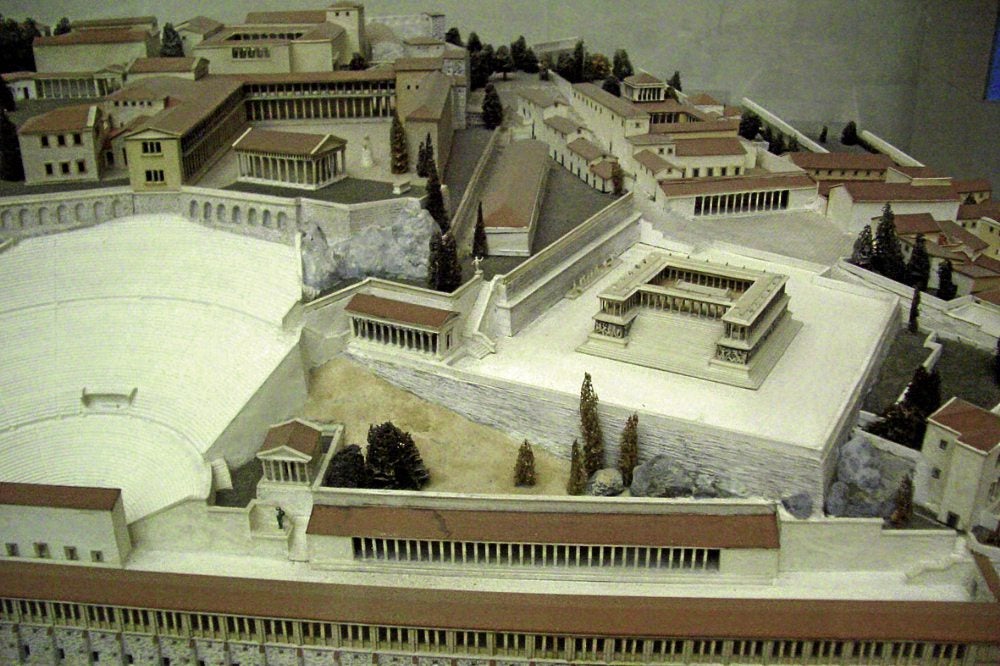 Model of the Acropolis at Pergamon

A friend from the United Nations Educational, Scientific and Cultural Organization once told me that his organization’s famous World Heritage List generally excludes museums. I suppose this may have to do with the fact that museums are very obviously heritage sites. As such, they do not need a Unesco declaration to be accorded recognition and protection.

One interesting exception is Berlin’s Museum Island which was inscribed in 1999. This is the name that has been given to the northern portion of a small isle in the center of the Spree River in the Mitte district of the German capital.

There are five venerable institutions in this site: the Altes, opened in 1863, houses the Greco-Roman Collections; the Neues, recently restored to showcase the Egyptian Collection; the National Gallery, completed in 1876; the Bode, constructed in the early 20th century for the Byzantine Collection; and the Pergamon, holding larger reconstructed archaeological tableaux.  It is this unique concentration which won Unesco’s nod.

Dominating the entire area are the huge greenish domes of the Berlin Cathedral. I could not help thinking as I surveyed this ecclesiastical pile that, for all its magnificence, this immense church was not even the star of the show. It was no match for the drawing power of its neighbors. There was no doubt: people flocked to Museum Island because of  the Museums.

Of the five, the most visited are the Neues and the Pergamon. The former is the home of the bewitching bust of Queen Nefertiti. The latter is named after its most spectacular display: the great Pergamon Altar.

I had seen so many photos of the Altar that I was quite anxious to examine the real thing. The prospect of viewing an ancient Greek building squeezed into a large hall of another edifice was rather appealing. After wandering around the other museums, I finally entered the one I had really come to Berlin for. As it turned out, I was quite unprepared for what awaited me.

The Pergamon Altar was breathtaking. It is a horseshoe-shaped colonnaded building which may have once sheltered a ceremonial space for making offerings. There was something about the broad marbled expanses that easily evoked the idea of perfection shining from a distant summit. A quick glance at the scale models in the room would reveal that this structure had been part of a hill of temples very much like the Acropolis in Athens.  The Altar was recovered from a site in what is now modern Turkey which was associated with the town of Pergamon, a center for parchment production in the Hellenistic world. An echo of this production can still be seen in the Spanish word for parchment: pergamino.

All around the base of the Altar is a carved frieze which depicts a battle between the gods and the giants. This is what scholars call a “gigantomachy”. The Greeks must have identified with the struggles of the gods.

As citizens of small states fending off the invasions of a gargantuan empire like Persia, they probably saw themselves in the same light.

How this impressive ensemble ended up in Berlin is quite a story. Apparently, in the 19th century, the Germans probably felt left out as the other European powers scrambled for fragments from the past.

Temples, tombs, and palaces in hapless localities like Egypt and Mesopotamia were being stripped of their contents. These were then carted back home to grace what were, in a sense, sanctuaries of plunder—the great museums. I suppose it was important to show a legitimizing connection with the ancient world. Collections of classical artifacts were able to confer on their owners the mantle of wisdom and grandeur associated with the Romans and Athenians of yore. If Germany were to be perceived as a rich industrialized nation, it too must have museums of antiquities.

A German team conducted excavations at Pergamon from about 1878 to 1886. Negotiations with the Ottoman government allowed what was dug up to be brought back to Berlin. Some say that this transfer actually saved the Altar since the nearby villagers had been mining the Pergamon precinct for building materials! Turkey would later bring up the idea that Germany return what had been taken, but it is doubtful that this request will be approved.

Of course, the idea of displaying entire buildings inside a museum is not unique to the Germans. Other examples abound in the United States. Among the more famous exhibits of the Metropolitan Museum in New York is that of the Temple of Dendur and its gate. These were given by the Egyptian government as a token of gratitude for the assistance granted by the American people (through the leadership of such luminaries as Jacqueline Kennedy) to save the monuments submerged by the rising waters of the Aswan Dam. The Temple was the backdrop for a party in the movie, “Maid in Manhattan,” starring Jennifer Lopez.

Unlike the Temple of Dendur, the Altar in Berlin stands atop a vast staircase. The best part is that people are allowed to sit on the steps, dreaming, trying to recapture glorious days under Mediterranean skies, basking in the light of the first mornings of democracy.

At the time of my visit, a special exhibit was being held at the Pergamon Museum.  It was called Babylon: Truth and Myth.  It aimed to show how certain notions had arisen about this legendary capital and how these overlay the knowledge that had been gleaned from archaeological investigations.  Often, popular perceptions were not borne out by what was actually found on site.

Due to sources like the Bible, the great City on the banks of the Euphrates was seen as place of debauchery, later to be destroyed as a punishment for its sins.  Archaeologists have determined, however, that Babylon was not demolished in one conflagration. It simply faded away as its power waned. Likewise, it is now thought that the real-life model for the great queen, Semiramis, who had helped earn for her presumed hometown the title of the Great Whore of the Ancient World, was probably not a citizen of the place at all.

Whatever is the reality, it is the myth which remains vibrant. I understood better why Babylon continues to captivate when I finally beheld the other great reconstructed jewel of the Pergamon Museum: the Gates of Ishtar.  The tireless German archaeologists had managed to carry back vast quantities of the tiles that had once festooned the walls of Babylon. Reassembled in Berlin, the glazed panoramas of dragons and lions continue to startle and enchant.

As with all my museum forays, my peregrinations—for all their historical and artistic aspirations—would invariably end at the gift shop. I noted that a large, brilliantly hued, temporary display of exhibit-related products was set up, not to be missed, right at the entrance. I was delighted to find that the ferocious creatures from the walls of Babylon could now be brought safely home as bags and notebooks. There were also images of the Altar, spread out on poster scrolls.

I suppose you could call this effective product design and marketing. Yet, the question which arises is this: Do museums perpetuate the myth that their many displays—shard, painting, or ancient edifice—are being exhibited for the sake of art when, in fact, the underlying force is really that of commerce?