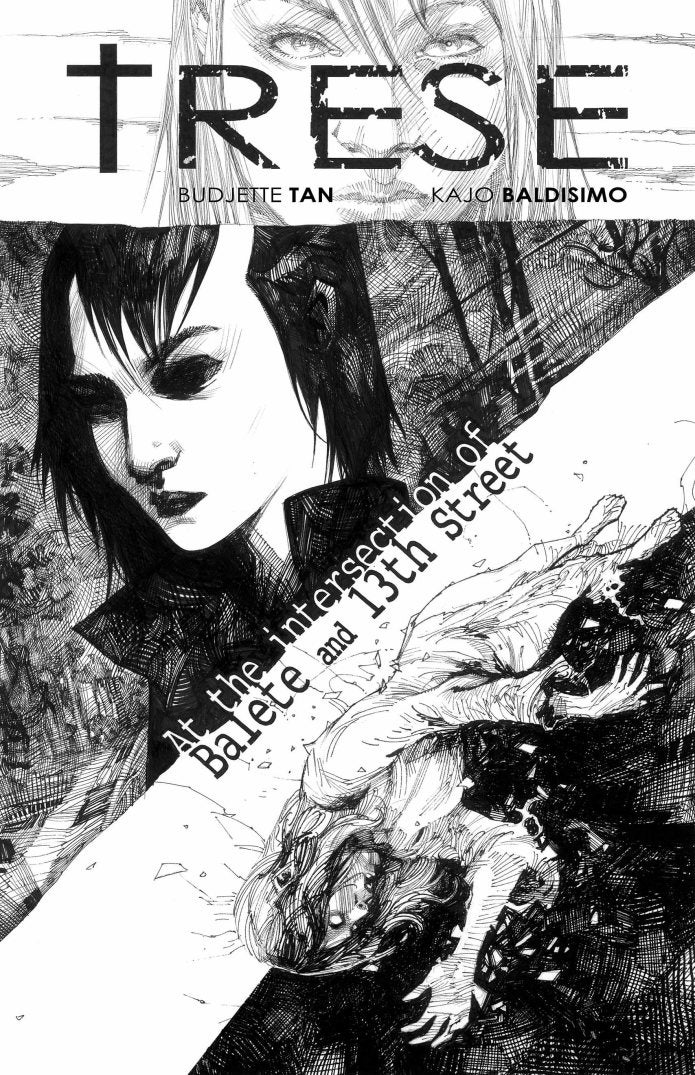 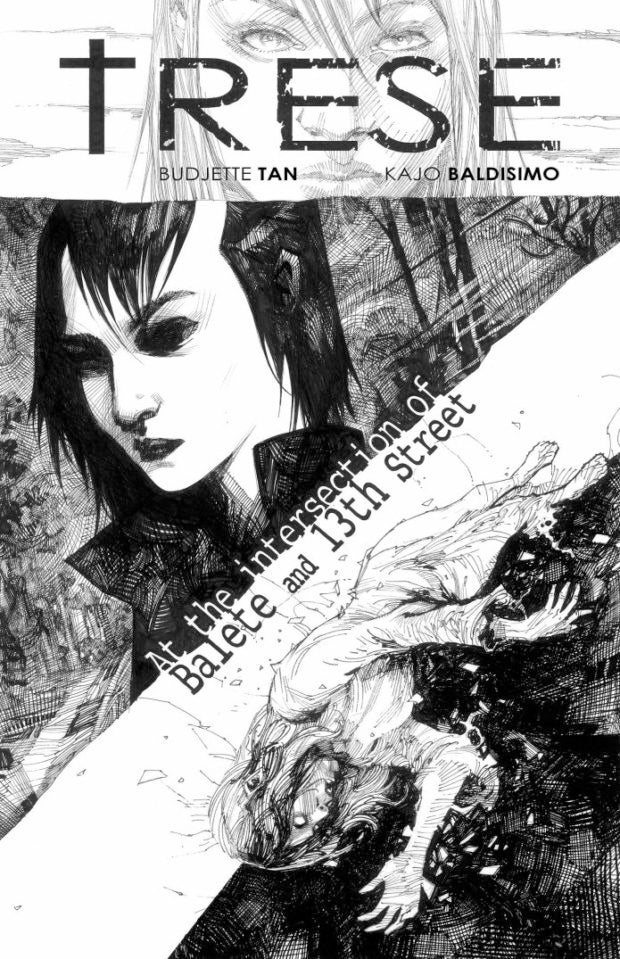 Alexandra Trese is going places—but she will need your help. The award-winning and best-selling comic book series from writer Budjette Tan and artist Kajo Baldisimo reaches for an international release through an Indiegogo campaign Tan started.

First published in individual series in 2005 through the legendary Alamat Comics imprint and later published in collected form by Visual Print Enterprises (Visprint), the black-and-white “Trese” follows the cases of mysterious invetigator Alexandra Trese, part of a family with a long history of involvement in the supernatural. “Trese” excelled in resetting Filipino mythology and folklore in a modern urban setting, with Trese getting called in by the police when the inexplicable happens. Among Trese’s first cases: a white lady is murdered on the corner of Balete Drive and 13th street, as well as a tikbalang with a penchant for drag racing. Trese, who operates a bar called The Diabolical as her day job, is assisted by the gun-wielding twin bodyguards known as the Kambal.

As the spooky, stylish series moved on, “Trese” shifted from a monster-of-the-issue format to one that delved deep into the family history of the Treses and a conspiracy against them. The series found a welcoming audience of readers who savored the modernized mythos and the compelling storytelling. In the process, “Trese” went on to have six collected editions, one hardcover omnibus and a reprint series of the originals in Filipino.

The Indiegogo campaign of “Trese” points to the new direction for the franchise. Tan, who now works for LEGO in Billund, Denmark, explained to Super that the crowd-funding campaign—which runs from September 13 to November 13, of course— was the logical next step after they could not get one of the big American comic book companies to publish the series internationally.

“For this global edition, it will contain the first ‘Trese’ issue/case, ‘At the Intersection of Balete Drive and 13th Street,’ which is a 20-page comic book story,” Tan said. “This edition will also contain a write up about the White Lady, the aswang, and the nuno, to help foreign readers learn more about our urban legends and folklore. And some additional pages to show more of Kajo’s amazing art! So, it will be a 32-page comic book.”

Aside from the series now being completely in English (it originally used a mix of English and Filipino), the “Trese Occult Case # 1” will have at least 60 percent of the art redone by Baldisimo. Visit the Indiegogo page at: https://igg.me/at/tresecomics1/x/19244495

The Indiegogo campaign features five tiers of support, ranging from $2 (the perk is an issue signed by Baldisimo) up to $313 (which includes a page of original Baldisimo artwork). If the campaign funding goals are reached, it will enable “Trese Occult Case # 1” to be printed and distributed through international channels. If they exceed their goals, then additional funds will go to “Trese Occult Case # 2.” The intention is to do one issue at a time if funds allow—unless the series achieves a dream goal by getting picked up by a foreign publisher, Tan stresses. The Indiegogo campaign is now at 60 percent of the goal with a just a little less than a month to go.

“When we started ‘Trese,’ I wasn’t really thinking of the global audience which is why I didn’t devote words to explain the White Lady, the aswang, the tikbalang, the snake-man under the mall. I just thought that the Pinoy reader would know about it,” Tan said. “But the funny thing, over the years, foreigners have gotten their hands on ‘Trese’ and have enjoyed reading it despite the story not having too much explanations. Based on their feedback, they really like getting introduced to this new pantheon of gods and this new bestiary of monsters. Aside from that, they really like how we’ve portrayed Alexandra and the Kambal and we now have fanboys (and girls) around the world. Which is part of the reason why thought releasing a ‘Trese’ global edition would work.”

The Indiegogo push has benefited from the support of “Sandman” creator Neil Gaiman. Asked online if Gaiman (who recently published “Norse Mythology”)if he would do a volume on Filipino mythology, he answered: “I really LOVE the myths and monsters of the Philippines. But you also have many terrific writers there who can do a better job of telling those stories than I can.” Gaiman had been a supporter of “Trese” since its inception in 2005 and Gaiman recently Tweeted the Indiegogo link, writing: “I was asked here recently about the Myths of the Philippines. Here’s an indiegogo to support a comic from (Budjette Tan) about an occult investigator battling Filipino monsters and gods.” “Honored! Excited! Elated! Humbled,” Tan said of Gaiman’s support.

But just because “Trese” is working on a global approach doesn’t mean Tan and Baldisimo have forgotten their local fans. The much-awaited seventh volume from Visprint is in the works, with Baldisimo promising to juggle art chores on that volume and the global edition. To see glimpses of the seventh volume, “The Exorcism of Linda Blasco,” visit the “Trese” Facebook page: https://www.facebook.com/TreseComics/.

This week, Tan will be making an appearance for the Philippines at the prestigious Frankfurt Book Fair. “In my 30-minute talk, I’ll try to cover the history of the independent comic book scene in Manila, starting from Alamat to Culture Crash and up to the most recent comic book releases,” he said. “But I’ll be giving more emphasis on the urban fantasy titles that have combined our myths and folklore stories and placed them in a modern day setting. And I hope that the international publishing community will find these stories interesting enough to give the Philippines a second look.”