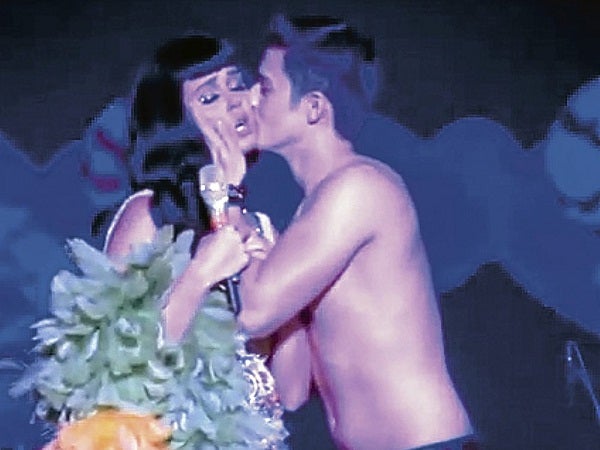 I thought to myself, it would be nice to go up there.” It’s two days after Katy Perry’s concert and we’re at the Star Magic office, sitting on a couch inside the Artists’ Lounge. On the other end of the couch is Ivan Dorschner. The guy Katy Perry kissed. The guy who kissed Katy Perry.

The story of the onstage kiss has been picked up by sites like People.com and the UK’s The Daily Mail but Ivan remains nonchalant about it. ”It’s interesting enough to make news, I guess. But she’s done it before.”

Katy has done it before—a total of 125 times, one for every stop of the California Dreams tour.

Ivan was at Katy’s Manila concert with an aunt. When Katy said the first guy who takes off his shirt would get to go onstage, Ivan hesitated. “Malalaman kasi ng mom ko. My mom’s Filipino. She’s conservative, more than just a little bit. And I want to make her proud.

There were guys around me who had taken off their shirts. My Tita was like, “Go! Go!” I was like, “Okay, fine, once lang ito.” My sweater even got caught on my watch. It took like eight seconds but it seemed like 20 minutes.”

The concert’s huge crowd watched Katy have fun with Ivan. “It was fun, without a doubt,” he said. “I can’t speak for Katy because this was her last one, she’s done it how many times but I definitely gave her a good kiss. I really did. I actually don’t want to see it, no videos, no pictures. Some people tried to show me yesterday, “Ivan, look it’s you! Look, you have no shirt!”

Ivan isn’t a stranger to the spotlight. Two years ago, when the Filipino-German-Irish 21-year-old went to the Philippines on a mission trip with his Baptist church (“We went to Bacolod, Iloilo, Guimaras Island, Bohol. We had clinics. I helped pull teeth.”), people tried to convince him to stay and give show business a shot. “I decided to try. I wanted to study the culture, I wanted to learn Tagalog. I wanted to experience life outside Los Angeles. I asked my parents if I could stay another month.”

They said yes. “My mom’s really supportive. My dad, he just smiled and said, “Well, we need to get you a chastity belt. But I never needed one, I have a built-in one around my brain.”

Ivan kicked things off with a modeling stint for Milk & Co. Eventually, he auditioned for “Pinoy Big Brother” and made the cut. He was in the Big Brother house for three months—a tough time for him, he says. “You have to come to terms with who you are, with everything you do, all your faults, your insecurities.” But he survived because his family kept him strong. “After getting out of the house, I had an interview with Kris Aquino.

“I heard someone calling my name and I saw my whole family right there in the studio—even my older brother who’s never been here, my cousin. I didn’t cry but I was very touched. I’m very very grateful.” 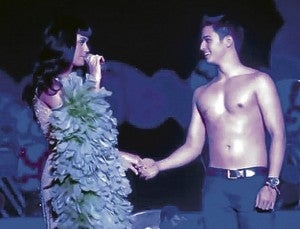 After “PBB,” he signed with Star Magic and had a series of TV guestings, hosting gigs, out-of-town shows and an endorsement deal with Jagthug. He is also Prince Oswald in the current Gantimpala Theater production of “Si Snow White at Pitong Dwarf,” a Tagalog retelling of the beloved fairy tale. The play is a challenge for Ivan who is still taking Tagalog lessons. “My character was hard to grasp at first. But I have command over it now. If Hugh Laurie or George Clooney were in the audience, I’d be hitting those lines. I’d be saving that Snow White.”

Were you surprised coming out of the PBB house that you had fans?

It’s a TV show that’s watched by so many people so I maybe have five. Five fans. I use one hand to count them. I remember all of them.

You have Facebook pages and fan sites, do you keep track of them?

No. I try not to mind them. 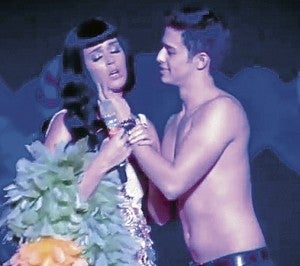 Are you an Internet person?

No. I used to be. You know DOTA? That was my life for four years. It sucks you in. You can’t get out. I’d be an inch taller if I didn’t have DOTA in my life. That’s why I don’t have Internet at home. No way. I can’t. That’s the only way I can survive. I started yesterday, Twitter. Only on my phone though.

What are you busy with now?

Keeping my shirt on.

Something like “House.” I think Hugh Laurie is a fantastic actor.

What are you most passionate about?

Acting. Movies. TV shows. It can be any of the variations. I just want to be invited to the Oscars. I want to see that invitation in the mail, my address, my name. It has to be for something I did. Kahit nasa harap ako ng camera or nasa likod.

And work for the United Nations. And start a movement for recycling. Here, we have three trash cans. There’s nabubulok, hindi nabubulok and recyclable. And no one cares!

You should do that.

It’s not that easy. I can’t stand at every trash can …I want to start a movement that would encourage the government to do what France does. You know what France does? They have one can. You just throw everything in there. But the French government, in some territories, not all of them, they have sorting places. It provides jobs, it provides environmental security and promotes responsibility. Para walang sayang. I’m sure it will be hard, it will be messy but it’s stuff that needs to be done. That’s what I want to do. That and being in the Oscars.

Which actors do you look up to?

“Ocean’s 11” has the best writing, class A repartee. They throw lines back and forth and it’s so cohesive. And anything by Steven Sodebergh. And that “Bourne” film they’re shooting here. I want to see that.

What? Wait, why are you interviewing me? Let’s go interview them. I’ll hold the phone. What are we doing? Stupid Ivan and his Katy Perry, taking the news away from them.