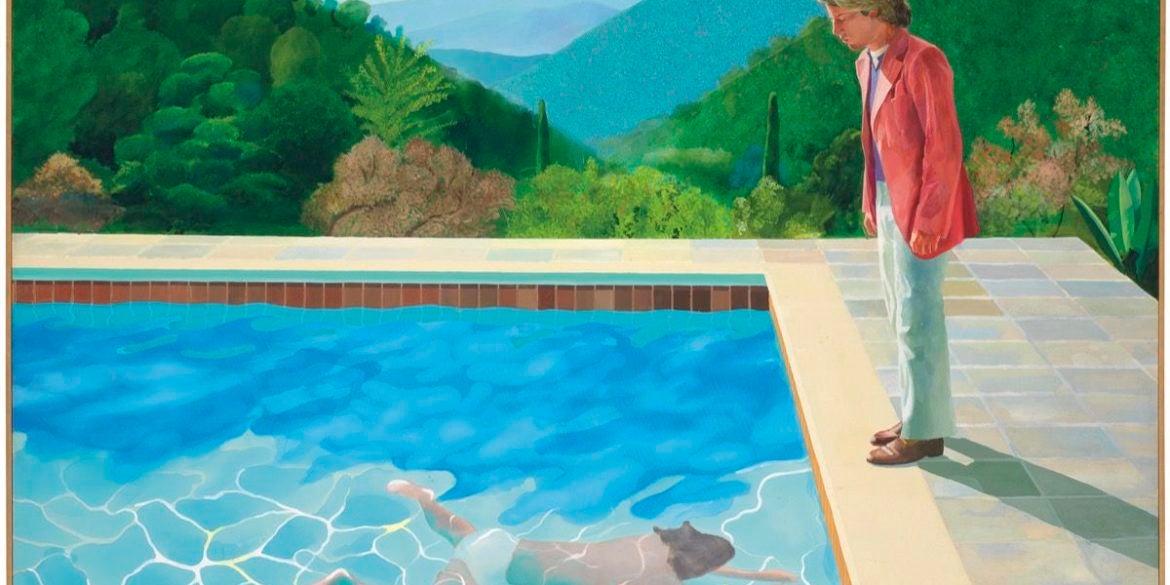 Here are the five works by living artists that have fetched the highest sums at auction, with Jeff Koons’ “Rabbit” breaking the record in New York on Wednesday.

The stainless steel casting of an inflatable rabbit fetched a record price for a living artist of $91.1 million at Christie’s on Wednesday.

The piece was auctioned from the collection of deceased publishing mogul S.I. Newhouse, whose empire included Conde Nast, which published magazines like Vogue, The New Yorker and Vanity Fair.

Christie’s in New York set the record for the most expensive work of art known to have been sold with the sale in 2017 of Leonardo de Vinci’s “Salvator Mundi” for $450 million.

‘Portrait of an Artist’, David Hockney

The previous record was for David Hockney’s “Portrait of an Artist (Pool with Two Figures)”, which fetched $90.3 million at Christie’s in New York in 2018.

Completed in 1972, the colourful oil painting shows a smartly dressed man standing on the edge of the pool and looking pensively at another figure swimming under water toward him.

Called by Christie’s “one of the great masterpieces of the modern era”, it was snapped up after more than nine minutes of bidding.

One of Hockney’s most celebrated works, it has featured on the cover of a number of monographs about the 81-year-old artist.

He was the top-selling living artist in 2018, with auction turnover for the year reaching $206 million, according to Artprice, global specialists in art market data.

This is ahead of German Gerhard Richter ($143 million) and Chinese Cui Ruzhuo ($124 million).

In 2013 another Koons sculpture, “Balloon Dog (Orange)” made history for the sale of a work by a living artist by fetching $58.4 million at Christie’s, New York.

At three metres high, it is one of five different-coloured sculptures of dogs that appear to be made from balloons released over 1994 to 2000 and have become icons of contemporary art.

Auction sales of Koons’ work in 2018 amounted to $38 million, according to Artprice, putting him at 14th in the ranking of living artists behind US painters George Condo ($63 million) and Jasper Johns ($58 million).

The fourth biggest sale is of German painter Gerhard Richter’s oil-on-canvas “Abstraktes Bild” number 599, which sold for $46 million in 2015 at Sotheby’s in London.

The 87-year-old, one of the top abstract and photorealistic artists of his generation, had completed the work of bold strokes in 1986.

In 2012 British guitarist Eric Clapton sold another piece in the “Abstraktes Bild” series for around $34 million, more than 10 times what he paid for it in 2001.

This vast ink-on-paper by one of Chinese greatest artists, 75-year-old Cui Ruzhuo, sold for $39.6 million at the Hong Kong Poly Auction in 2016.