‘Godzilla II’: One ‘King’ to rule them all | Lifestyle.INQ ❮ ❯ 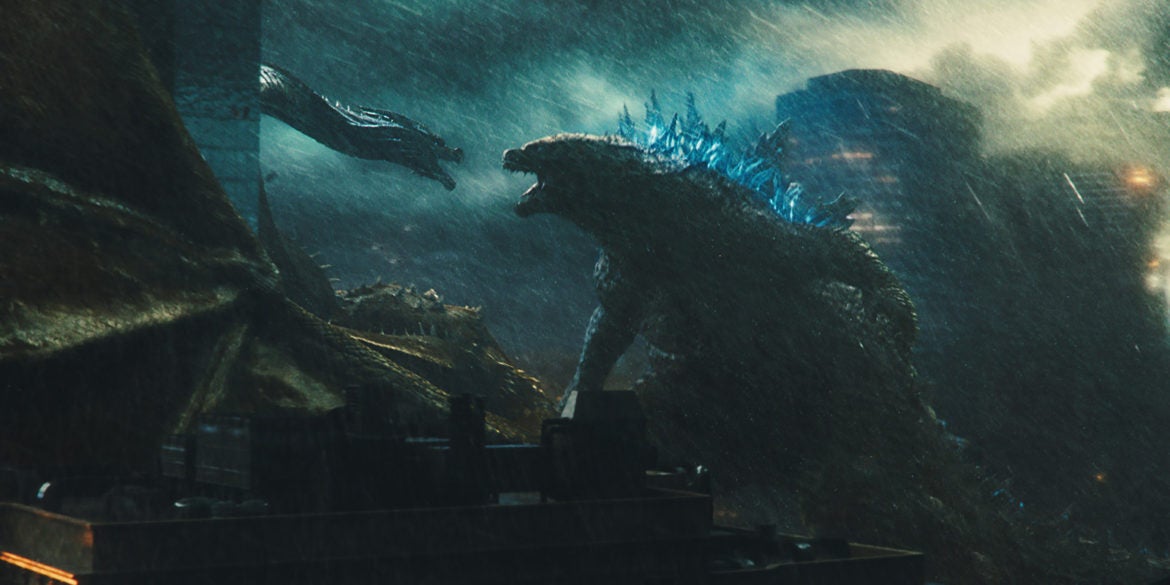 King Ghidorah and Godzilla duke it out for dominance. PHOTOS FROM WARNER BROS. PICTURES

‘Godzilla II’: One ‘King’ to rule them all

For over half a century, Hollywood had been trying to re-invent a monster—the monster of all monsters.

In 1954, “Godzilla” (“Gojira”) introduced its iconic giant lizard creature to the world as a frightening metaphor of nuclear fallout, from director Ishiro Honda. Since then, Godzilla has appeared in over 30 Japanese films and his name has become synonymous with monster as well as a symbol of Japan. Under the control of Toho Co., Ltd., Godzilla has gone from atomic symbol to unusual anti-hero to campy children’s hero to environmental protector to pure monstrosity. Its roar alone is enough to make him stand apart. Godzilla is the best example of the kaiju—the film genre of giant monsters.

Hollywood first met Godzilla when it re-edited the original film to include American actor Raymond Burr into “Godzilla, King of the Monsters!” in 1956. Hollywood has been dubbing the Japanese films into English but has yearned to unleash its own version of Godzilla. They finally got their chance with the 1998 “Godzilla,” but that film, diverging too much from the source material, became famous for all the wrong reasons.

In 2014, Warner Bros. Pictures and Legendary Pictures released “Godzilla,” a big-budget re-imagining of the monster from director Gareth Edwards (who would go on to direct “Rogue One: A Star Wars Story). That film used a particular horror style—of showing as little of the monster as possible—and, while successful at the box office, wasn’t exactly the Hollywood Godzilla movie kaiju fans were looking for.

“Godzilla II: King of the Monsters” is that film. Instead of obscuring the creature, “Godzilla II” places him front and center—and he’s got company.

“Godzilla II” takes place shortly after the events of the first film, with the monster-watching organization Monarch keeping an eye on the Titans—the film’s term for kaiju—while the military agitates to destroy the creatures. But in an unexpected turn, the Titans escape and wreak havoc on the world. At the heart of the horror is King Ghidorah, the three-headed Titan who is a rival to Godzilla. Humanity must find a way to combat the escaped Titans—and only Godzilla can help them.

The film not only includes Ghidorah, but two other iconic kaiju—Rhodan and Mothra. Not coincidentally, these four kaiju were the stars of 1964’s “King Ghidorah, the Three-Headed Monsters,” a film that “Godzilla II” references a lot.

In the middle of the Titans’ emergence, a family is torn apart (Kyle Chandler, Vera Farmiga and Millie Bobby Brown) while scientists Ishiro Serizawa (Ken Watanabe) and Vivienne Graham (Sally Hawkins) returns from the first film to continue to find a way for humanity to coexist with the Titans. “Godzilla II” features a cast as formidable as its monsters including Charles Dance (“Game of Thrones”) and Zhang Ziyi (“Crouching Tiger, Hidden Dragon”). The actors throw themselves into the fray with gusto with Dance monologuing with the best of them. The best performance is that of Brown (doing Millie Bobby Brown things) in her first feature film role. The human drama ramps up considerably as the film goes on, but never manages to take a bite out of the Titan action. There’s just so much of it in this unapologetically twisty story. Director Michael Dougherty may have never directed a film this size before, but it doesn’t show at all.

“Godzilla II” tackles a whole Monster’s Island worth of themes, in particular, the effect of humanity on the planet, the nature of mythology and good intentions with bad consequences. When characters say, “you’re a monster,” they don’t mean the Titans.
“Godzilla II” takes the 2014 film and throws actors, special effects and the kitchen sink at it. For over two hours, the monsters take over. “Godzilla II,” with its amazing CGI, represents a quantum leap from the classic man-in-a-rubber-suit aesthetic.

What it keeps is the larger-than-life, monsters-are-real feel of the Toho films. It takes the kaiju concept completely straight and runs with it, resulting in a monster mash audiences outside of Japan have never seen before. The Legendary Godzilla, the largest of all the live-action Godzillas, is back with pugnacious fury, battling to stand at the top of the Titan food chain, literally “The Big Guy.” But the most glorious appearance is that of Ghidorah, its lightning-spewing hydra-headed horror rendered on an unprecedented scale. These two slug it out in a way that is worthy of the film’s catchphrase, “Long live the king.”

“Godzilla II” constantly references the Japanese franchise in ways big and small (the title of course calls back to the 1956 American re-edit and Bear McCreary’s score includes snippets of the original “Godzilla” and “Mothra” themes), but mostly just destroys the screen like the cities in his way. With its population-killing, scenery-demolishing personality, “Godzilla II” recalls the over-the-top, sci-fi heavy films such as 1968’s “Godzilla: Destroy All Monsters” and 2004’s “Godzilla: Final Wars,” notably in the sheer number of monsters and how the military is deployed to confront the Titans.

Legendary is building its own MonsterVerse, currently including the two Godzilla films and 2017’s “Kong: Skull Island,” leading into 2020’s “Godzilla vs. Kong,” something only proper since King Kong was the first of all kaiju, having debuted in 1933.

This movie brings monster movies to a new level. You can never have too many monsters—or monster movies–and that abundance of abandon is what makes “Godzilla II: King of the Monsters” the one king to rule them all.

Warner Bros.’ “Godzilla II: King of the Monsters” is now showing in cinemas.