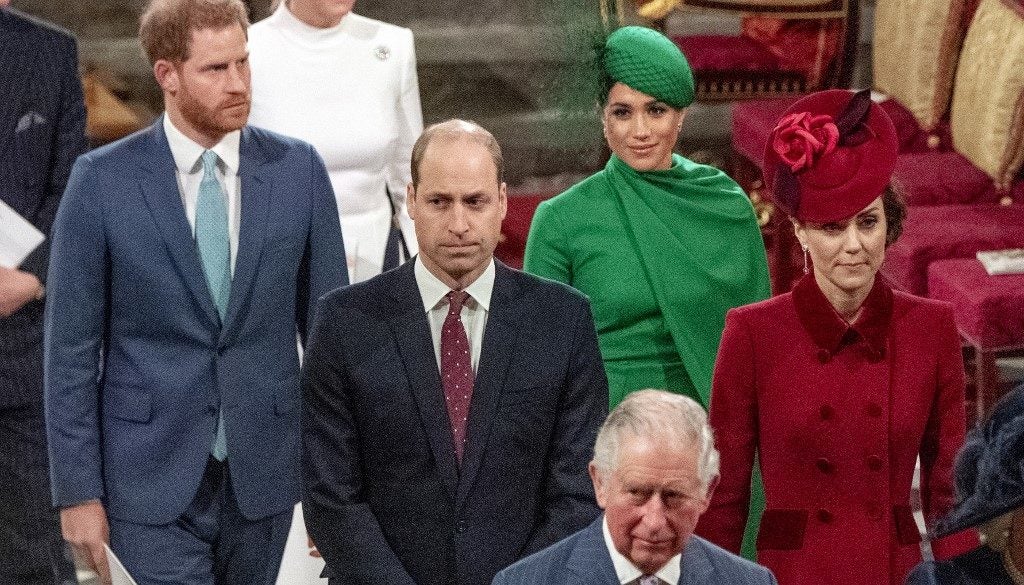 (FILES) In this file photo taken on March 09, 2020 Britain's Prince Harry, Duke of Sussex (L) and Britain's Meghan, Duchess of Sussex (2nd R) follow Britain's Prince William, Duke of Cambridge (C) and Britain's Catherine, Duchess of Cambridge (R) as they depart Westminster Abbey after attending the annual Commonwealth Service in London on March 9, 2020. - Prince Harry and his wife Meghan formally step down as senior members of the British royal family on March 31, 2020, as they start a controversial new life in the United States. (Photo by Phil Harris / POOL / AFP)

Prince Harry and his wife Meghan formally step down as senior members of the British royal family on Tuesday, as they start a controversial new life in the United States.

The couple have already relocated to California, according to reports, after announcing in January that they intended to quit royal life and “work to become financially independent”.

The decision means they will no longer carry out duties on behalf of Queen Elizabeth II and are giving up their office within the monarchy in Britain.

It follows reports Meghan was deeply unhappy with life inside the centuries-old institution and increasing complaints from the couple about media intrusion.

Their shock announcement rocked the royal family, appearing to blindside the queen and other senior family members.

It led the 93-year-old monarch to call an emergency summit with her eldest son and heir Prince Charles, and his two sons Princes William and Harry, to thrash out the terms of their departure.

The family eventually agreed the couple, who have an 11-month-old son Archie, will relinquish their His or Her Royal Highness titles, and no longer use the “Sussex Royal” label.

However, they will continue to be known as the Duke and Duchess of Sussex, their official titles, and Harry remains sixth in line to the throne, with no change in the line of succession.

Harry and Meghan’s departure — dubbed “Megxit” by the British press — is a far cry from 2018, when they married in a fairytale wedding at Windsor Castle watched around the world.

Meghan, 38, a former TV actress who is of mixed race, was seen as a breath of fresh air for the royal family, which is often characterised as stuffy.

But relations with the media soon soured, with some newspapers accused of peddling offensive racial stereotypes and dishing out unfair criticism.

There were also reports of splits within the family, and a growing rift between Harry and William.

Since revealing their plans, the couple had been living in a luxury mansion on Canada’s Pacific west coast, visiting Britain only briefly this month.

But the pair are said to have relocated to California by private jet earlier this month before the United States closed its northern border because of the coronavirus outbreak.

Meghan grew up in Los Angeles and her mother, Doria Ragland, still lives there. She also has a network of friends and work contacts in the city.

What they do next though is unclear.

“My feeling is that they have become very irrelevant in the grand scheme of what’s going on in the world,” royal biographer Penny Junor told AFP.

Junor said it was now a particularly uncertain time for Harry, “a very special member of the royal family”.

However, Junor said the couple had left “the door ajar” to return to the royal fold if the American odyssey does not work out.

The couple’s initial announcement to quit Britain divided opinion and their move to California comes after Harry’s father was last week diagnosed as having COVID-19.

British royals have been showing solidarity with health workers fighting the outbreak, while the queen released a message saying her family stood ready to play its part in the national effort.

“Harry and Meghan have chosen celebrity over duty,” The Times said in an opinion piece on Monday.

Meanwhile, the couple failed to get a warm welcome from US President Donald Trump, whom Harry recently criticised for his stance on climate change when he received a hoax phone call.

Trump said he was “a great friend and admirer of the Queen and the United Kingdom” but insisted US taxpayers would not pick up their security bill.

“They must pay!” he wrote on Twitter on Sunday.

The president’s warning prompted a rare public response from the couple’s spokeswoman, who said they had “no plans to ask the US government for security resources”.