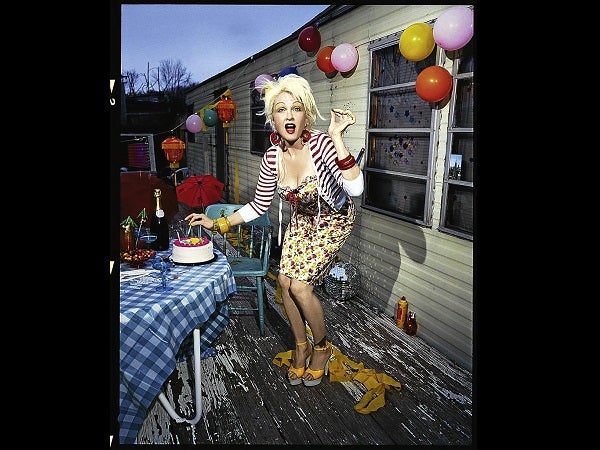 Oh, and she’s got two Emmys as well—besides being a prodigious singer-songwriter, she is also an actress and writer.  Many people call themselves Renaissance Women, but Cyndi has got this title down pat.

She is definitely an icon of the ’80s with hits like “Girls Just Wanna Have Fun,”  “True Colors,” “Time After Time,” “She Bop,” “‘Money Changes Everything,” “The Goonies R” “Good Enough,” and “I Drove All Night.”  Match that music-writing prowess with a voice unlike any other (she sounds like crackled honey) and you get over 50 million albums sold.  Not bad for someone who once damaged her vocal cords and was told by three doctors in that she would never sing again. This was 1977 and obviously, she’s still singing!

One of the most covered artists of all time, Cyndi is definitely a musician’s musician. Mariah Carey, Celine Dion, Katy Perry, Miley Cyrus, Boyz II Men, Phil Collins, John Mayer, Pearl Jam and even our own Lea Salonga are among the over 250 international artists who have done renditions of her music. Check out what these local music luminaries have to say about “the quintessential girl who wants to have fun”:

“Can you imagine I caught her first Manila show in 1989! I was only 11 years old pero hardcore fan na. ‘Goonies’ was my favorite song. Umiiyak ako sa ‘Time After Time’ video.  I have a VHS of her concert in Paris that I’d watch over and over again.  I watched it again recently and I realized na sobra akong na-influence ng drummer niya at the time. I know her voice is still amazing.  Tsaka ang cute niya, sobrang crush ko siya. After 23 years, hardcore fan pa rin!” – Jazz Nicolas, Itchyworms’ drummer/vocalist/songwriter

“I heart Cyndi because she always champions inner beauty and individuality.  She defined style rather than followed it.  We played ‘Time After Time’ and ‘All Through The Night’ at her Saguijo Tribute – ang saya lang!”– Katwo Puertollano, graphic design maven/Duster vocalist

“Of all her songs, ‘True Colors’ is the one that resonates with me the most because it’s not what you’d expect from her.  What an amazing song!”– Sarah Marco, Taken By Cars vocalist/currently in the US to perform at the famed SXSW Festival

“We covered  ‘All Through The Night’ in Saguijo, a song I’d never heard of before the gig and now I can’t stop listening to it! When Cyndi sings, you can really feel her emotions and I really love that about her.” – Isabella ‘Saab’ Magalona, Internet superstar/Duster co-vocalist/new Cyndi fan

“I love Cyndi because she is a great songwriter.  Actually, madami akong gusto sa mga kanta niya – but I love ‘True Colors’ particularly because of its message and melodic quality.  Intro pa lang, galing talaga. – Ene Lagunzad, vocalist of The Ronnies

“I’m not ashamed to say that I was one of those little girls who sang ‘Girls Just Wanna Have Fun’ in my loud frou-frou-meets-punk outfit alone in my super pink room.  I got emo listening to ‘Time After Time’ on my little transistor radio. Damn, I was already emo at such a young age! But now that I’m seriously pursuing my music, I look back on all those songs I tripped out on in my childhood and marvel at how amazing she is at her songwriting craft!  Gawd, I hope I get to meet her!” – Kate Torralba, fashion designer/singer-songwriter

“Cyndi Lauper Live in Manila” is happening at the Smart Araneta Coliseum on March 17, Saturday, The show is a production of PULP Live World. Tickets are available at all Ticketnet outlets nationwide (911-5555).