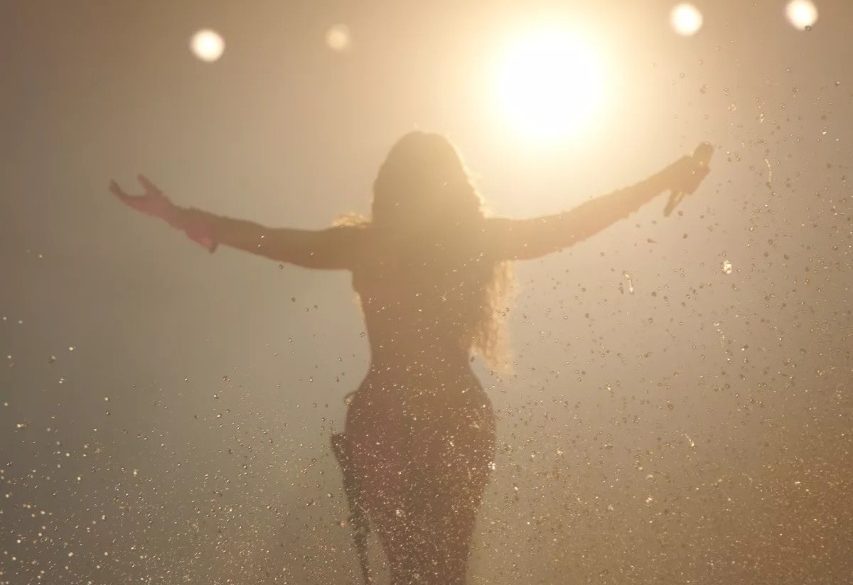 The music icon was back in action at the invite-only three-day opening event of the opulent Atlantis the Royal hotel in Dubai’s Palm Jumeirah island. Beyoncé performed her first live event in five years for which she was reportedly paid $24 Million.

Beyoncé performed an hour-long set that included “Be Alive,” “Halo,” “Crazy in Love,” and the Etta James classic “At Last,” as well as other hit songs, while no tracks from her new “Renaissance” album were performed. The 48-person all-female orchestra Firdaus and the Lebanese dance troupe Mayyas provided support for Grammy-winning artist.

For her first look, the singer made a striking entry in a vivid yellow gown by Omani designer Rayan Al Sulaimani through her label Atelier Zuhra. The made-to-order gown has a bustier bodice with sheer panels and a center-cut skirt with two side slits with scale-like elements; She was wearing a full-body feathered piece behind her back to add drama to the ensemble. It is no chance that Beyoncé chose to wear a Middle Eastern designer to open the show as she seized the chance to highlight local talent for the superstar is renowned for making her most significant fashion statements on stage.

She invited her daughter to perform with her for the first time; Blue Ivy was wearing a bright red glitter sequin jumpsuit that her grandmother Tina Knowles-Lawson and Timothy White designed and created.

Going to her second, Beyoncé’s red Nicolas Jebran gown and silver sunburst headdress were eye-catching as it was hard to ignore:  It included a sequined bodice top with gold piping and adorned gold bra cups, as well as pleated pants and a skirt. Her opera gloves had gold-tone hardware as additional embellishments. In a comment for the custom look, the Lebanese designer referred to it as “the art of creating moments to live up to.”

For the finale, she was raised from the stage on a pillar as pyrotechnics and flames appeared in the water. She finished the performance wearing a look designed by Ukrainian designer Ivan Frolov: a powder pink minidress and matching leggings and opera gloves, complete with gold embellishments and crystal embroideries. Frolov revealed, “the outfit was created in our workshop in Kyiv, Ukraine, during war and massive blackouts.”

To close, a fireworks display and a drone show were presented after the show. For the after-party, the Swedish House Mafia performed a set.

The “Grand Reveal Weekend” at Atlantis The Royal hotel takes place as the resort gets ready to open reservations in February. It will also stage a fashion show to introduce Beyoncé’s most recent Ivy Park collection.