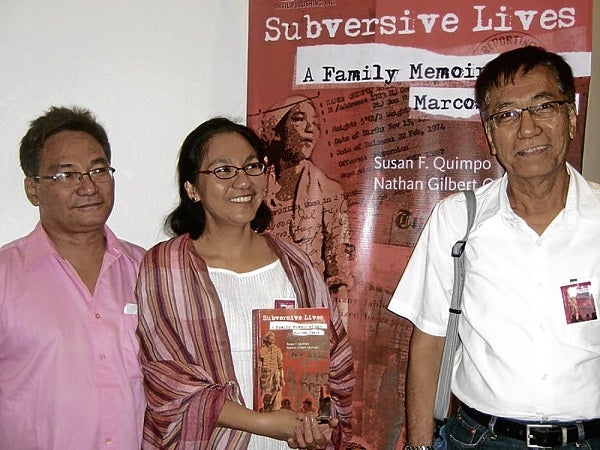 A book against forgetting

As we mark the 40th anniversary of the declaration of martial law, it seems we have put that ignominious era behind us. And why not? We yearn to return to normalcy: rebels must simmer down and make a living, children must be allowed to enjoy the benefits of a global economy, and grandchildren must be brought into the world to give us a chance at joy.

We have to believe that we have not stood still, that things have become better for our having survived.

More than half of our population today were born after the 1986 People Power Revolution. How can we keep those crucial years from seeming a mere blip in our history? We must tell the stories of those who defined us at our best through their idealism and love for this country.

Such a wrenching but necessary memory-jogger is this real-life saga of a family that paid an extraordinarily high price for being Filipinos at a crossroads in our national life. It carries the byline of Susan Quimpo and brother Nathan, but the contributions from seven other siblings and a sister-in-law are essential to the telling of a tale that must endure for posterity.

Susan attests to the “bloody” task she took on, of getting so many family members residing in different continents to re-visit this painful time in their shared lives. But thankfully, each one’s unquenchable reflective impulse and uncommon journalistic skills won out. In particular, Susan’s depiction of harrowing scenes from both urban and rural battlegrounds are worthy of any “war” documentary.

“Subversive Lives” brings us to Ground Zero, where a typical middle-class young father and mother (Ishmael Quimpo and Esperanza Ferrer), just emerged from the upheavals of WWII, valiantly face the challenges of feeding, clothing and educating their brood of 10. In aspiring for a better future for their children and imbuing them with values of compassion and justice, they inevitably provide the fodder for their social and political awakening. Through the siblings’ mini-biographies, we relive the turning points at which the family’s destiny flows into the tide of national events: the First Quarter Storm of January 1970, the declaration of martial law in September 1972, and Ninoy Aquino’s assassination in August 1983.

The four brothers who are drawn into radicalism—Nathan, Jan, Ryan and Jun—are mere adolescents when they become activists, then revolutionaries. Their elder siblings—Norman, Lillian and Caren—come into adulthood right smack in the middle of a society in transition. They, too, are fired with a sense of mission that compels them to embrace activism of varying risks and commitments.

Susan, the youngest, had already spent a lifetime visiting her siblings in various detention centers when she entered UP in the 1980s. Following the footsteps of her role model ate Lillian, she joined the NDF cultural arm Peryante. “I joined the movement despite its shortcomings, because it fought for human rights,” she recalls. “Besides, it was the only sustained opposition to the Marcos dictatorship.”

With horror and foreboding, we watch as one by one the siblings are sucked into the maelstrom that quickly becomes hell. From relatively tame involvements such as supporting evicted squatters and protesting oil price increases alongside jeepney drivers, the teenage boys separately find their way to the Kabataang Makabayan, and later abandon their studies in elite schools to join the CPP/NDF/NPA. As far as the brothers were concerned, events had overtaken the debate between armed struggle and peaceful reformism.

Nourished by the nationalist writings of Amado Hernandez, Claro M. Recto, Renato Constantino, Teodoro Agoncillo and Hernando Abaya, and impressed by Jose Maria Sison’s analyses of Philippine society according to Marx-Lenin-Mao Tse Tung thought, they saw no recourse in the fight against the dictatorship.

Ryan recalls how he felt in 1972: “Tyranny had succeeded in silencing all voices, except one, and it came from the Communist Party of the Philippines (CPP) through its embryonic underground movement, guided and woven together by this publication. Reading ‘Ang Bayan,’ I felt proud and vindicated, I was part of the only resistance movement that foresaw, prepared for, and survived the onslaught of military rule and fascism.”

Not any less chilling from the distance of 40 years are the descriptions of police, paramilitary and military brutality against those who dared protest, march, boycott, barricade or were merely suspected of being subversive. The fugitive life of moving from one safe house to another, betrayals, raids, arrests, detention, interrogation and torture become nightmarish realities.

In a grim equation of sorts, Nathan and Ryan rose in the party ranks and carried on their organizational work in the relative safety of European assignments (though not without their own hardships as political refugees), while their two brothers spilled their blood in unknown battlefields.

If Marcos was the destroyer of a generation’s dreams, Jose Ma. Sison turned out not to be the true prophet of progress, either. From their two separate vantage points, Nathan and Ryan provide up-close chronicles of fundamental conflicts among CPP leaders, leading to differing strategies and the tragic purges of the 1980s. Bearing with the unappealing personal qualities of Sison and his wife was only a minor hurdle.

Many years later, eldest brother Ateneo mathematics professor Norman learned from fellow activists that it was Sison, not Marcos, who ordered the Plaza Miranda bombing

Nathan resumed his schooling 18 years after dropping out of UP. Now 60, a PhD holder and professor in political science and international studies at the University of Tsukuba in Japan, he looks back at his life in the revolutionary movement as “the most difficult, self-sacrificing, exciting and dangerous…inspiring, excruciating, audacious and horrendous…”

He criticized the Left for not participating in the Edsa People Power Revolution and losing an opportunity to share power in the post-Marcos government, but later he told friends, “Thank goodness, we didn’t win in 1986. If we had, the Philippines would have ended up with a regime worse than Marcos’—a totalitarian dictatorship.”

And so a question hovers over the narratives and haunts the siblings to this day: Was it all worth it? We may sympathize with the view of their eldest sister Lys, that the armed struggle was a waste of human resources, on a scale similar to Marcos’ plundering. But only those who were in the thick of the struggle can venture answers.

“Reflecting on my years in the movement…brings up feelings of grief, sadness and shame,” confesses Lillian, now a widow and a resident of Perth, Australia. “I still grieve over the suffering and loss of my younger brothers and the waste of their young lives… But the shame is also deep for having followed a duplicitous leadership and for staying as long as I did in the movement.”

It was an expectant moment at the book’s launch last April 20, as Ryan, now 57, who has made a career post-CPP as IT specialist, approached the microphone. “We had no choice,” he said simply. “It was our duty.” In the book, he ponders Sison’s view that the failure of the Philippine revolution of 1896 was due to the leadership of the liberal bourgeoisie. “I now believe,” he concludes, “that whether leaders are proletarian or bourgeois may be important, but individual character is also important and can be decisive.”

That leaves us—you and me and PNoy—holding the bag!

At Edsa, we showed that we can boot out a dictator. With flowers and confetti we rejected the inhumanity of both Right and Left. Kabit-bisig we resolved that the Yellows will lead this country. We declared our faith in so-called bourgeois democratic forms: non-armed, peaceful, legal—with enough room for occupying, planking, texting, blogging, tweeting and noynoying. We had better make this work!

Meanwhile, Satur Ocampo and company have been in and out of Congress. Etta Rosales is chair of the Commission on Human Rights. Joel Rocamora heads the National Anti-Poverty Commission. May the Quimpo family find some consolation in this. May other “subversive families” like the Lacabas and the Hilaos come out with their memoirs. And may we never forget those who fell in the night, without seeing this dawn.

Mariel N. Francisco coauthored (with Fe Ma. Arriola) “The History of the Burgis” (GCF Books, 1987). She was head of the Education Committee of the anti-Marcos organization Kaakbay, founded by Sen. Jose Diokno in 1980.