A fitting finale to a magical life 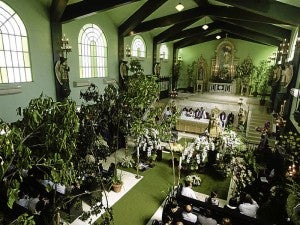 May I call a funeral Mass  serene, elegant and so chic?

This was the overwhelming feeling I got as I entered the Chapel of the Ascension at Villa Escudero in San Pablo, Quezon, for the final  Mass of Don Escudero.

Escudero was a  brilliant movie director, multi-awarded Famas and Urian production designer, and my best friend of over 40 years.

The sun was high and bright, but as soon as you pushed open the heavy dark green curtains (we were La Sallites, thus green) at the entrance, you entered a rarified world.

What greeted us  was an astonishing sight—a golden urn etched with exotic relief in a small pond of carnations, mums, roses, and orchids that seemed to float, a soft pink spotlight on it.

To the right of the altar, where the arrangement was, one could see the image of Mama Mary in rich baroque robes, and to the left, the image of the Risen Christ.

One felt cooled by the quiet air conditioning, the sunlight softened by stained glass windows, giant white candles flickering then like tender murmurs,  and the music of Elton John from his early years and other selections from Don’s favorite composers, Sondheim and Puccini, wafting through the air.

One lingered on the hard wood pews to chat and reminisce, as friends and family came in and out in small numbers. It was mersmerizing; it was fragrant, as if all who sent flowers had been told, only big white wreaths—from Jamby Madrigal, Sen. Bongget Marcos, the Aranetas and many more with old family names.

Was it snobbish and very classy? Yes and I loved every single detail—understated, lush and cozy. I want exactly this setting for my funeral.  So cool, collected, elegant, serene and chic.

The funeral Mass was amazing, with the most expressive eulogies by Danding Genato, who loved Don from high school; Tats Rejante-Manahan, a beloved muse and confidante; and peer Peque Gallaga.

His favorite uncle, Ado Escudero, spoke in extemporaneous Tagalog, regretting the loss of an heir apparent, as did his youngest brother Ugi, who Don worked with planning his death, cremation, wake and funeral meticulously.

Following Don’s wish, his ashes would be kept in the family home for a year, then interred in the Escudero family crypt.

Beautiful pictures of a magical life, of  an artist who helped create masterpieces such as “Oro, Plata, Mata” and “Scorpio Nights,” were flashed in a slide show, as Elton John’s “Mona Lisa and Mad Hatters” played.

Only a genius of a production designer could stage his own funeral Mass, where tears mixed with joy celebrating his love of family and career.

Don taught me how to live life with zest and honesty. Don showed me the importance of benevolence and manners, protocol and pomp.

Just before his last birthday  in late January, I sent him a video of his favorite American composer Stephen Sondheim, telling him the song “Being Alive” from the musical “Company” should be the theme of his big birthday bash at the Coconut Pavillion of Villa Escudero.

He replied immediately. “Thank you Larry for the idea, it will be the invitation tag line, celebrate my ‘Being Alive at 55.’”

It is a song where the birthday boy, at the end of his party, realizes he must let love of family and friends define his life. To let love in was to be alive, to survive being alive; love was the only destiny.

I will think of you every day, Don,  for the rest of my life.