Behind the scenes with Teyet | Lifestyle.INQ ❮ ❯ 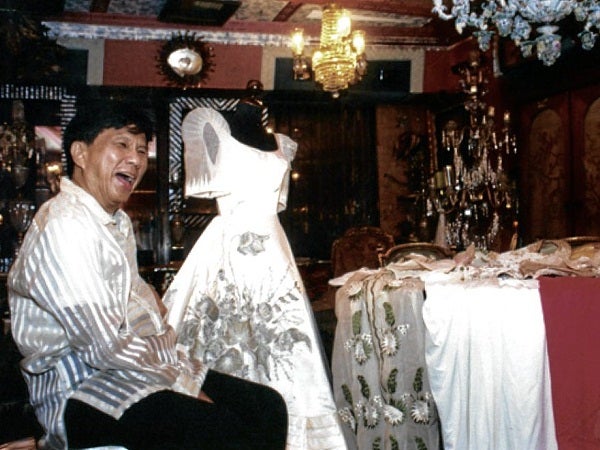 Behind the scenes with Teyet

As Dr. Eleuterio “Teyet” Pascual is laid to rest Sunday, he leaves us precious memories of moments that were a mix of sadness and hilarity, of high society and show biz, of erudite talk and gossip.

Through the years, our lunches and dinners went beyond talk on design and the arts. Or beyond lunches and dinners, we had some incredibly funny anecdotes. In truth, Teyet, as everybody called him, was at the center of incidents that became the talk of the town for years to come.

The “stabbing” incident between foremost couturier Pitoy Moreno and the late foremost painter Oscar Zalameda really happened during the opening of Solana restaurant in Mabini. But contrary to the stories and versions that were passed on through the years, it wasn’t really a “stabbing” incident, at least not with the use of knives. Pitoy and Zalameda just threw barbs at each other, and when Zalameda—as Pitoy recounted to me—began to poke his finger at his barong and as the painter pressed closer and was poised to throw a plate at him, Pitoy grabbed a nearby fork. So it was “plato” versus “tinidor.”

It wasn’t true that the cause of the fight was a basketball player. In truth, Pitoy didn’t have much to do with the player. But it was Teyet’s hilarious retelling of the incident and how he joked about the two protagonists that made us remember this incident.

In the show-biz incident that became the banner of broadsheets and tabloids, Teyet, without meaning to, was at the center, unknown to people. This was the pre-Christmas lovers’ quarrel of glamour icon Gretchen Barretto and business tycoon Tonyboy Cojuangco. The condo units of Teyet and Tonyboy were on the same floor. An emotional Gretchen, who was dashing away from Tonyboy’s condo, ran straight to the open door of the kitchen of Teyet’s condo.

Teyet wasn’t even home, but he told his household staff to let Gretchen stay in the living room. When he got home, he and Gretchen had a long talk; when he recounted this to me months later, he said that he just listened to her. Then, he said, he called Tonyboy. After some time, when Gretchen had calmed down, he brought the actress, in his car, to where her boyfriend was waiting.

Again, contrary to what people said, Teyet didn’t really talk to media about it.

It was while we were doing a fashion shoot in Teyet’s home in Vito Cruz, Manila, that Teyet said he was cutting off ties with his bosom friend, Pitoy. It was a milestone shoot—we borrowed Teyet’s collection of vintage Ramon Valera gowns, styled them in a contemporary way on top model Joyce Oreña, who was running a temperature that day. The fashion images we produced that day were beautiful and trailblazing, but it was also the day the war between Pitoy and Teyet would begin.

The rift would drag on for years.

In both their twilight years, however, I realized as I talked to both—always on separate occasions—that the feeling of enmity wasn’t there anymore. Both had mellowed. In truth, both had forgotten about it.

At the height of Teyet’s naughtiness, during the high-profile wedding of our friend, he pulled off a surprise in the quaint church. Style-wise, it would clearly be the wedding of the year, given how the bride’s mother, the fashion designer, the florist, and Teyet as style director of the whole event, spared no effort or expense to make everything elegant. In the middle of the ceremony, in strode two of Teyet’s househelp dressed in ternos by—you guessed it—Pitoy Moreno, from Teyet’s collection.

But Teyet wasn’t always naughty. He could be the easiest person to deal with, the most amiable and generous—if he liked you. In the out-of-town wedding of another friend, the day before the wedding, he spent the whole day decorating the venue so that he missed his meals. He didn’t grab a bite until dinner that day.

And even as he moved in high society, he also was at home with the work staff and construction hands.

He took good care of people in his employ and supported even their families.

A poignant moment I had with him, which I will remember for a long time, was one late night in his condo. He had just acquired the diary of Juan Luna then, and he was proudly showing it to me. It was pocket-sized, some of its pages loose, and he was studying the drawings and doodlings, the penmanship, the entries. He was pointing out to me how often Juan Luna and Rizal were together in Europe—as seen in his diary. Rizal was the first “metrosexual,” he’d try to convince me.

I’d listen to him spin off stories from the entries in the diary, some of which we’d make up and imagine about our Filipino heroes and their sojourn in Europe. We’d go on and on, until before we knew it, it would already be dawn.

I learned from the man.