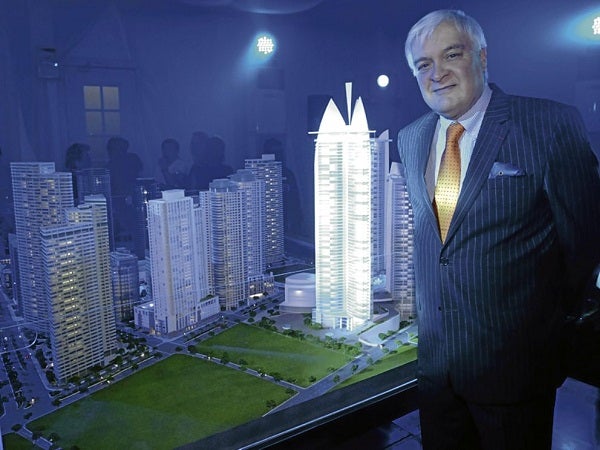 With Proscenium, Rockwell ups the ante

The billboards began appearing several months ago. They showed a white-haired man in a suit, poring over what looked like a blueprint.

The distinguished-looking gentleman is Carlos Ott, an architect from Uruguay who made a splash when he was chosen to redesign the Opera de la Bastille in Paris when he was just 25 years old.

He described the project as his “big break” because it placed him on the international scene.

“I had a year to plan the project. It was a very complex 150,000 sq m, and it had to be built in five years! The heads of state of every country in the world, even President Corazon Aquino, came to the inauguration in 1989,” Ott said in an interview.

Now, he has been tapped to design the Proscenium at Rockwell, a 3.6-ha property that was the headquarters of Colgate-Palmolive Philippines.

Proscenium will consist mainly of residential towers. With construction to be done in phases, completion of the first two towers is expected in 2017.

Anyone who’s ever set foot in the Rockwell mixed-use development, whether at the Power Plant Mall or any of the existing residential towers, is always struck by how everything seems to jell in this place. The palm trees lining the public area and even inside the mall seem to have been there for ages. Actually, Rockwell, the community, is only 17 years.

Master planner Walter Raleigh Stewart said the vision was to “create a green, high-quality residential-based, mixed-use community within a city,” and so far, they have stayed true to their course.

“At Rockwell, we are pioneering standards and levels of quality beyond what can be found anywhere in the world,” Stewart added.

Signing up architect Ott to design the Proscenium, Rockwell Land is moving into the future but with its vision of a community.

Ott began an interview with Inquirer Lifestyle by defining Proscenium, the name, and why he chose a curvilinear design. He explained some features of the residences.

“Proscenium is a Latin word for front (pro) and stage (scenium). It’s the window or arch that separates the artists from the audience. We decided on Proscenium because we incorporated a theater for the performing arts into the design,” Ott said.

Although they’re still deciding on the dimensions of the theater, they are already on the lookout for somebody—an impresario, Ott said—to handle day-to-day operations to ensure its profitability.

For his first project in the Philippines, Ott wanted to think outside the box, and after a few sketches, came up with rounded towers that allowed fewer units per floor, an uncommon luxury. With cuts measuring as big as 300 sq m, and an average of only four units per floor for the first two towers, the Proscenium is designed for those seeking luxurious privacy.

“If they expect a shoe-box building from me, they will be disappointed,” Ott has been quoted as saying. “I wanted to do something more sensual, more organic. Our facial features are not flat so I chose a curvier design.”

The two- or three-bedroom units will have wider views and balconies that residents will be able to enjoy, once accordion-like glass panels are installed.

“The weather in Manila is similar to Singapore where it is hot or humid. Unit owners will have the option to fully draw back the ‘curtains’ in the evenings,” Ott said.

The completion date for the first two towers may be five years away but there is already a wait list for the units.

“Rockwell is not a bunch of real estate projects. This is a community, and every single thing, including the Proscenium, is subordinate to the welfare of the whole community,” master planner Stewart said.

Apparently, members of the Rockwell community respond to this dictum without feeling stifled because they know it is for the common good.

“We get better real estate values because people would rather be part of a community. That’s what sets Rockwell Land apart,” Stewart said.