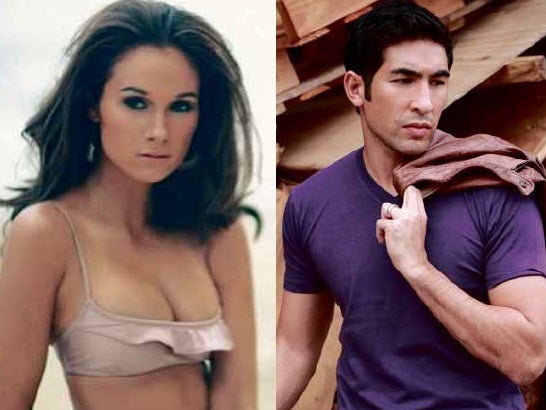 “But not three weeks before a shoot. I’m nowhere near the fastfood,” Georgia clarifies.

A mother of three, at 30, she still snags swimwear and lingerie assignments.

“I’m lucky!” exclaims businessman/athlete/model and husband Armand del Rosario. He is married not only to one of Manila’s pretty faces but also to a great cook. (Likewise, this diet-conscious sportsman can’t resist his mother-in-law’s desserts.)

The Del Rosarios are one of the most attractive couples in town. They are endorsers of popular brands.

However, they have diverse perspectives about fitness. Georgia believes in “functional fitness”: She burns calories by taking care of her children and keeping an active lifestyle.

“My fitness routine depends on what I’m doing,” says Georgia. “I’d walk a hundred steps and I don’t sit around. I lift stuff and climb the stairs. When I’m with my third baby, I sometimes carry her. I believe that when a child hits two, there’s no need for a stroller.”

Occasionally, Georgia joins her husband in the gym, on the cardiovascular equipment such as the elliptical trainer or the Airdyne Exercise Bike.

Asked how she keeps her trim figure without having to spend hours in the gym, Georgia says, “This might irritate people. It’s genetics.

“After giving birth and losing weight, you don’t have the hanger-figure of a model anymore. The body gets curvy. I’ve been okay with it. I’m not the type who says, ‘Oh, I have to get skinny again!’”

After delivering her second child, she did pole dancing. “It gives you an awesome figure and it defines the arms.”

She then posed for Rogue magazine, looking straight at the reader, in a khaki-colored bikini. Her bosom was still full from the breastfeeding.

When she’s preparing for a bikini or lingerie shoot, she eliminates salt from her diet to prevent bloating, and the carbohydrates to lose a few inches. She avoids soft drinks, diet sodas and iced tea, and drinks a lot of water.

She has healthy meals at home. Her children eat brown rice and vegetables in every meal and take plain yogurt with fruit.

“They like to snack on carrots and cucumber, but they also eat ice cream in moderation,” she adds. “I like to cook Filipino food like sinigang, tinola and nilaga because all the vegetables are packed in.”

Georgia admits to wanting to be in shape for her husband.

“I am one of those who believe that if he looks good for me, then I want to look good for him. There are so many girls here who look fantastic and don’t have the extra skin. I have to be on my toes. I know it can be shallow, but it gives me a good reason to stay fit.”

Although he’s one of the oldest members in the team, Armand, the 35-year-old sportsman and president of Healthcare Advantage Institute, can play a mean game with younger players like Phil and James Younghusband, who are 26 and 27, respectively.

Armand admits that, two years ago,  his body was a bit flabby despite the football practice. His waistline was 34 inches.

“I’d get minor injuries; I was heavier.  I couldn’t run as fast as the younger kids,” he says.

“I didn’t know I was out of shape until I came here,” he says. The program made him realize the importance of building core stability and functional training (exercises that prepare the body for specific activities).

His program has three phases. He warms up the core and gluteal muscles using resistance elastic bands. Then he gets into suspension training to utilize his own body weight in various angles tapping more muscle groups. The third phase is weight-resistance training on specific body parts.

To extend his lung capacity, he hops on the Airdyne Exercise Bike. It not only  provides wind resistance that forces him to pedal harder, but the movable handlebars also work out the upper body.

He has since lost 15 lbs and his waistline has whittled down to 31 inches. He achieved the trim tummy by bracing his core muscles throughout the workout.

At 163 lbs, he claims he’s in his best shape ever. He built his endurance and got stronger in the midsection and legs.

“I have so many old teammates who have retired. These workouts have extended my playing career. Now I’m keeping up with the younger guys. I can even do more push-ups than they can. It’s all the hard work I’ve been putting in here. As long as I maintain the gym, even if I take one or two weeks off football, I feel fit when I get back to the field,” he says.

During football season, he eats hard-boiled eggs, chicken and fish and avoids pasta.

He points out: “When I talk to kids, I advise that if they want to become better sports professionals or even develop a good work ethic, go to the gym.”