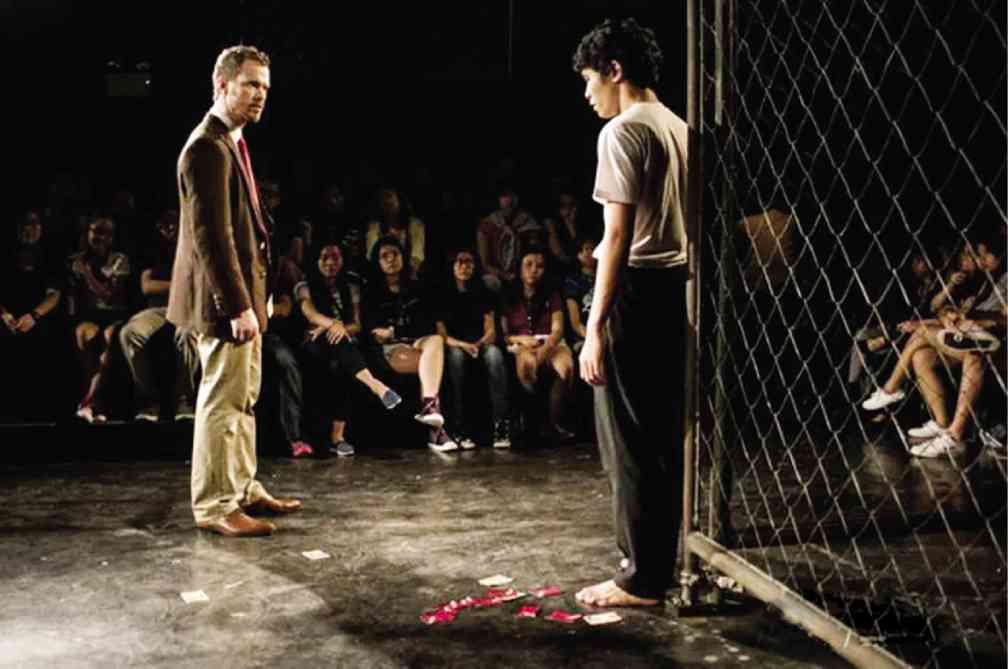 SCENES from “Middle Finger,” directed by Ed Lacson Jr. Fences coop up the two main characters, Catholic schoolboys railing against a world of sellouts and hypocrites.

Thumbs up for ‘Middle Finger’

In what way? The 2006 version went for cartoonish satire. Featuring an all-student cast, the play depicted the situations as ridiculous, the youths all victims, the adults all freakish. I remember a classroom scene in which students barked in unison, like trained animals. The set was a Snakes & Ladders board writ large.

Under the hand of Ed Lacson Jr., the 2014 version brings the play back from the edge of unreality, to better effect. The grownups feel less like caricatures, and since they are played mostly by adult actors, they feel like real people—stiff, pathetic, dogmatic, prissy people—but nonetheless flesh and blood.

For both productions, Lacson turns the Black Box Theater (in Ateneo’s Fine Arts annex, formerly the Communications building) into a dark hall, using the floor as performing space, the sets and props kept to a minimum.

The story centers on the friendship between Jakob Rodriguez and Benjamin Lunga, two Filipino teens in a Catholic school somewhere in the United States. Not only are they enduring the maelstrom of adolescence, they are also new arrivals in a strange land. Worse, they’re in a school right out of Wedekind’s “Awakening of Spring” (which writer Han Ong loosely adapts).

Why a Catholic school, Jakob asks his parents. Because, they tell him without a whiff of irony, the experience will “build character.”

The experience builds something else: resentment. Jakob is the layabout, cutting class frequently to while away the hours playing video games at a mall, forging excuse letters when he does show up, copying homework from Benjamin who is the conscientious, dutiful student. Yet Benjamin is the one who gets into trouble.

The school scenes are the only ones drenched with light, as if to shrivel up any remnants of mystery like so much bacteria. The school ends up breeding something else. Dressed in identical grays (tie, sweater, slacks), the kids line up for morning inspection, hold out their fingers like obedient rabbits, get rapped on the knuckles by a stern-faced teacher if their nails are too long, then say, “I am evil and will not enter the Kingdom of God.”

Benjamin writes a charming essay on “mystery”; it’s a word that the school, for all its religious pretensions, can’t accept. It’s too vague, its meaning can’t be pinned down. “What is ‘mystery’ code for?” asks the counselor (Richard Cunanan as a sly, patronizing interrogator, like a Cold War operative outing spies), manipulating Benjamin into making a false confession.

Aside from resentment, the school spawns self-loathing with its severe moral code. “The body is a vile, lustful thing,” Jakob mutters, reading from a textbook. “Nakakadiri ako,” says Jachin’s older brother, afflicted with a terrible rash of pimples and sent to the hospital, but he knows his affliction is just a manifestation of his ugly interior.

Indeed, the material is handled masterfully, but a large part of this production’s success is the performance of its two leads. Joe-Nel Garcia played Orfeo in last year’s production of Sarah Ruhl’s “Euridice,” a tender, painful evocation of the fragility of love. As Benjamin Garcia wins us with his vivid earnestness, his desire to rid his mother (Dolly de Leon) of the abusive partner she has shacked up with, his indignation at being accused of falsifying his essay (“Ni minsan sa buhay ko hindi ako nangopya!” he tells Jakob, spitting out the words), his powerlessness in the face of it all.
Jakob is the play’s central role, and Guelan Luarca enters into it with ease.

Luarca’s Jakob is a boy who can’t wait to be a man and is hung up between two states of being. He blusters, he whines, he pleads, depending on who’s around. When Benjamin asks if his parents beat him for his truancy, he says, “Subukan nila.”

He bullies and taunts the bespectacled weakling, Jachin. When his parents give him a talking-to for wasting his opportunity at a good education, he slouches in his chair, his jaw pushed forward from a thick neck, his chin up, defiant. He’s too smart to take his elders at their word. When the essay assignment is given (“Write on something that interests you”), he sneers, telling his classmates that they aren’t meant to write what they’re really interested in but what the teachers think they should be interested in. (The classroom scenes prove him right.)
But in the play’s second act, Jakob has a change of heart. “I want to be good,” he tells his disbelieving father. His mother is giddy with delight, stuffing even more fat books into his room, but his father gives him a lecture on what the world is really like (it’s composed of two kinds of people, the stupid and the skilled; the first are relatives of the supervisors, so you can’t kick them out, while the second look at you as if you’re some kind of relic and can’t wait to take over from you). If his father is his future, what’s the point in hitting the books?

And when he’s finally over his goody-goody phase, Jakob resolves to strike a pose, showing the world what it wants to see while harboring revenge in his heart. What form it will take, he doesn’t know. But he is determined to keep it burning, especially after the terrible injustice that befalls Benjamin.

Writer Han Ong, a Filipino who migrated to the United States in his teens, wrote the play in his 20s (it was first staged by the Ma-Yi Theatre Company in New York in 2000), which may explain why the play offers no resolution, no shelter from the terrors of adolescence. How will Jakob take revenge on the world? When? Will his resolve wear out in the years to come, and will he join the play’s world of desultory grownups?

Ong leaves us a clue in the character of Wallace, a boy with a strange affliction. He says he slept in a field one day and woke up, without knowing how many days and nights had passed, with birds nesting in his hair. The disbelieving teacher (played with a martinet’s zeal by David Blanco; an Italian-American who looks Irish, his sallow skin hints at the character’s bloodlessness) forces him to recount the story in front of his classmates, but the play comes down on the side of the boy.

In a penultimate scene, Wallace cries out while grappling with his hair, his hands clutching at his head as if in the middle of a colossal migraine, then he springs skyward. Blue panels on the ceiling light up, the outlines of birds in them; the flapping of birds fills the air, and Wallace is free. It’s a touch of magic realism Ong graces the story with.

Like the other youths in the play, Wallace speaks the truth and isn’t believed. But it is only a matter of time before he is released from his torture.

Before that release comes, the story’s youths give the world—symbolized on stage by its minimalist set, composed mostly of panels of wire fences—the finger. In its most bluntly symbolic moment, Jakob enjoins Benjamin to join him in cussing at these fences that coop them up like animals and cut up the sky into tiny parcels beyond their grasp.

This coming-of-rage story can be understood as one long finger-giving exercise, one prolonged bellow at a world where only sellouts and hypocrites survive.

Comments are welcome at [email protected]