LONG display of postcards of images Abad scanned and reproduced from two 1991 auction catalogs from Christie’s. PHOTOS BY ALANAH TORRALBA

The ongoing exhibit of young artist Pio Abad at the Jorge B. Vargas Museum at the University of the Philippines (UP) Diliman might come across as staid, especially for those who saw his splashy silk scarves exhibited at Silverlens last year. Those framed squares of silk told a story of the Marcos regime, using the remnants and trappings of that era.

In “The Collection of Jane Ryan and William Saunders,” Abad doesn’t stray far from the topic, although this time he uses images of items amassed by the Marcoses during their reign.

Jane Ryan and William Saunders were the Hollywood-sounding alter egos that the Marcoses used to open Swiss bank accounts in 1968.

The exhibit opens with a trio of figures depicting the fictional characters “Si Malakas at Si Maganda.” This creation myth tells of the first Filipino couple that emerged fully formed from a split bamboo.

“I had been researching on that narrative, that mythology that the Marcoses perpetuated—where Ferdinand was man of strength and Imelda was woman of beauty—and how they used that kind of fiction to shape their version of the country,” Abad told Inquirer Lifestyle.

He recalled visiting the Malacañang Palace museum as a child, after the Marcoses had fled, and saw Imelda’s shoe collection and a painting of a half-naked Ferdinand emerging from a bamboo thicket. 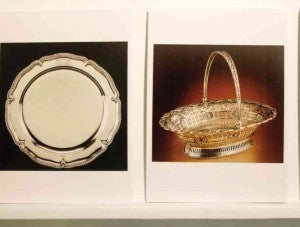 These memories, plus his own research, resulted in the current exhibit. “I was drawn to the absurdity of the images,” he said.

He described the show, which he worked on for a year and a half, as “different levels of fictions” being put together. “My interest really is using installation and conceptual art to talk about recent Filipino history.”

In the next room is a long, waist-high display. Propped up on either side are two neat rows of postcards of images Abad scanned and reproduced from two 1991 auction catalogs from Christie’s.

The images are of items sequestered from the Marcoses. “At 10 meters long, this may be the largest installation I’ve done so far. The postcards depict the Royal silverware and Italian Renaissance paintings that were discovered in Malacañang and other places after the Marcoses fled,” said Abad.

He added that he wanted a forensic quality to the way the images are presented. Visitors can pick up the postcards, inspect them, and take a few pieces when they leave.

“It’s crazy,” he said, referring to the silverware. “Why would anyone need a silver bowl for vinegar?”

But that’s not all. The list is long and includes multiple silver table services that might never have been used, and museum-worthy paintings by Italian masters. 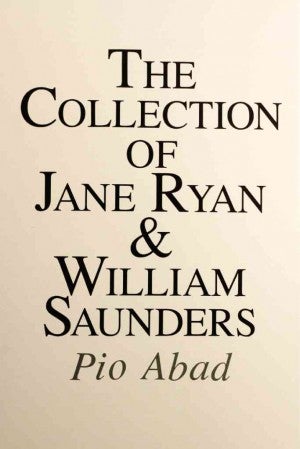 “The show deals with the cultural legacy of the dictatorship. This idea of presenting history properly is very important. That was the motivation behind putting up this show,” Abad said.

Strangely, and as mentioned earlier, the exhibit seems very somber. It is neither confrontational nor belligerent, although the artist sees it differently.

“I think it’s the most confrontational work I’ve done but it’s still presented in an elegant fashion. I don’t want to make work that’s angry; I just want to tell a story,” Abad said.

The artist, whose parents, Budget Secretary Butch and Dina Abad, as well as his sister, were incarcerated during the Marcos years, grew up in a politically charged household. “There is a need to discuss this period in our history as it hasn’t been fully fleshed out. There are gaps in memory that maybe an artist can fill,” he said.

“The Collection of Jane Ryan and William Saunders” runs till Sept. 30 at the G/F Lobby and West Wing Galleries, Jorge B. Vargas Museum, UP Diliman, QC.