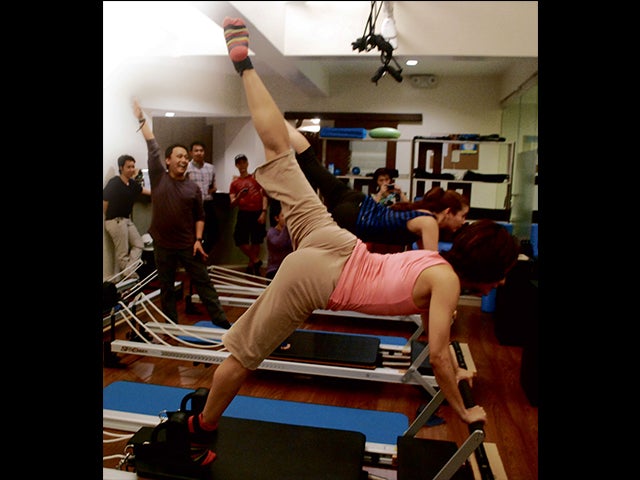 Karylle finds a Pilates program that’s perfect for her

Singer-actress Karylle (or Ana Karylle Padilla Tatlonghari-Yuzon) beat the workout boredom and plateau when she enrolled in a different studio.

Over the past 10 years, she had joined various Pilates programs in different fitness centers. Although the workouts made her walk taller, they tended to be too routine.

At Options Studio, her program enabled her to recover from an injury, join a marathon and cope with her scoliosis.

The programs are based on the Pilates Academy International’s system, which focuses on muscular balance, alignment and function rather than getting fixated with a beautiful body.

The exercises are modified according to the client’s body and fitness level. Aside from using the standard Pilates exercises with various machines, her trainer incorporates other routines into her workout.

“The programs are always changing. There is always something new. I love the trampoline,” she says, referring to Cardiolates, a combination of trampoline jumps to burn calories and build endurance, and Pilates exercises to sculpt the muscles.

Her program conditioned her for a three-kilometer marathon. Karylle placed third with a record of 16:30. She felt more confident because she felt the lengthening of her muscles after her workouts. “I was happy to be free from pain,” she adds.

Florencio Eugenio, fitness guru and owner of Options Studio, explains that there are specific exercises to correct muscular imbalances that cause injury in the first place.

A knee injury from overuse is the most common problem among runners. The runner’s knee is a result of a misaligned kneecap or cartilage tears. “We work on small, local muscles around the joints to strengthen them. Poor posture also weakens our core muscles, invariably leading to joint problems. Pilates and training the local muscles can get runners in shape,” explains Eugenio.

Karylle recommends it as a cross-training and rehab program for her running coach, and as great conditioning exercise to friends and stylist.

The increased body awareness of alignment and weight distribution also made her cautious of her posture, and in carrying objects. She once went on a trip wearing fashionable shoes, and lugged around a heavy bag on her shoulder. The load of the bag and the wrong shoes triggered her scoliosis.

“From now on, I’ll be kinder to my body. I don’t believe in the ‘no pain, no gain’ school of thought. I don’t want to kill myself just to look good. Pilates is not painful. Yet, you feel the muscles working. Be kind to your body and you can exercise forever,” she says.

Fortunately, the scoliosis didn’t progress and she never allowed it to be a hindrance to an active lifestyle.

However, there are some who feel they don’t burn enough in a standard Pilates workout. Options introduced its circuit training workout that strengthens, lengthens and tones muscles and other benefits of Pilates, with an intense, calorie-burning cardio element.

The circuit training involves balance training on the Bosu ball, flexibility on the Reformer, and cardiovascular endurance with minimal rest between apparatuses.

“The circuit training includes a gentle warm-up following the Pilates principles of coordinated breathing and keeping the core muscles connected. We tend to be stronger on one side of the body, so that we neglect the weaker side. Testing your balance on the unstable Bosu ball will force you to work the local muscles without you even having to think about them. You get uniform conditioning for the body. After the Bosu ball, we do the strengthening and toning on the Reformer,” explains Eugenio.

When Karylle tried the circuit program, she found the side leg lifts the most challenging. “Runners tend to be weak on their sides because they are always moving forward,” says Eugenio. The side leg lift strengthens the gluteal muscles that control the movement of the pelvis and strengthens the muscles connected to the knee.

Aside from strength, Karylle also shows off a clean body line and grace. She attributes those qualities to her ballet training with Amelia Garcia-Yulo. Ballet Philippines principal Katherine Trofeo is a former classmate. Both appeared as Sita (Karylle sang and Trofeo danced) in Ballet Philippines’ “Rama Hari.” During curtain call, the duo rendered a little dance number that inspired their former classmates to take up dancing again.

“When I got back to dancing, I felt much stronger. If I had only known about Pilates when I was taking up ballet, I would have been a better dancer,” says Karylle wistfully.

Pilates has maintained her curves, much like her idols, Kim Kardashian and Dita Von Teese, who also do Pilates.

Eugenio adds that Pilates is ideal for singers, since it involves breathing from the diaphragm, the muscle that delivers volume. On trends, he observes, “The fitness world is ever evolving. We need to incorporate other elements to make a complete body workout.”