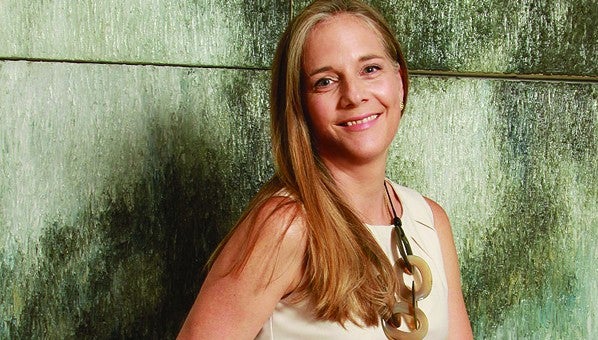 Sevrine Miailhe: “As I move to Bordeaux, I will promote the Philippines.” PHOTO BY: NELSON MATAWARAN

The modern Filipino dining room is furnished with a long dao table and benches, stainless steel batibot chairs,  a turned floor lamp made of soft wood called galipawen  and a woven abaca rug, all done by artist-furniture maker Yolanda Johnson.

Like a veritable art gallery, the walls are spruced up with paintings by Filipino modernists such as Fernando Zobel, Mia Herbosa, Antipas Delotavo and Rodel Tapaya, and a cluster of photographs by Jaime Zobel, Neal Oshima and Wawi Navarroza. Against a mocha accent wall, a Filipinized version of the iconic painting of “Girl with the Pearl Earring” hovers over the Batangas table.

“Everything here is from the Philippines,” says French national Sevrine Miailhe (pronounced MeeEYE). The 46-year-old Rustan’s executive proudly wears a Philippine carabao horn necklace that enhances her Michael Kors shift. When she and her children leave for France in July, they’ll be bringing all of these artworks and furniture to decorate their apartment in Bordeaux, the city proper of France’s wine epicenter. “I will tell people that these are all available in the Philippines,” she adds.

French Ambassador Gilles Garachon acknowledged Sevrine’s role in strengthening ties between the French and Filipino communities. “My love for both countries has helped me bring people together in my modest way,” says Sevrine, who is also the advertising and communications manager for Rustan’s.

Sevrine is married to winemaker and businessman Edouard Miailhe. Although the Miailhes own a vineyard and winery, Chateau Siran, one of the oldest estates in southwestern France, they had a trading and real estate business in the Philippines. Faced with more responsibilities in managing the winery, Edouard decided to relocate his family to France.

Still, the Philippine connection is strong. He considers Chateau Siran a Filipino winery and hoists our national flag. He was recently appointed Philippine honorary consul.

When the Miailhes were married in France in 1998, Sevrine was employed at McCann-Erickson handling L’Oreal, the world’s largest beauty company. Working for an exacting and demanding client, Sevrine learned the discipline of communication and developed an eye for aesthetics.

“We did photo shoots and ads, and showed them to L’Oreal’s  marketing management. We would do as many as 25 layouts as there were endless discussions in figuring out the perfect ad, the perfect catchy sentence, the typeface, where the model was facing. If the client wasn’t happy, we had to redo them,” she recalls. The work experience came in handy later.

In 1999, Edouard had to take care of the family’s properties in Manila, and so Sevrine and her eldest child Theophile moved to the Philippines. According to French labor laws, a woman can take a leave of absence from work until her youngest child turns three years old. Her leave took longer than expected when she gave birth to Eliot, Anabelle and Benjamin.

While the four children were growing up, Sevrine sat on the board of Alliance Française and the Museum Foundation of the Philippines, and cofounded the International Food and Wine Society.

When Benjamin turned three years old, Sevrine decided to resign from McCann-Erickson and sent her resumé to major department stores in the Philippines.

With her experience with L’Oreal, Sevrine found a job as the marketing and communications manager of the cosmetics division of Rustan’s. Six years ago, the division seemed like a microcosm of the Philippine society—there was lack of synergy and brand identity.

“People didn’t know how to communicate with each other,” she recalls. “Now everything is aligned. When you put things together, everything makes more sense. I am a team-builder, not a one-woman show. I’ve been lucky that the people I’ve worked with are dedicated and trusting.”

Under Sevrine’s tutelage, the cosmetics, skincare and fragrance brands strategized their marketing instead of just touting products. All the brands came together under one umbrella.

In the past six years, Rustan’s developed departments for special events, loyalty program and digital marketing.

“It’s not enough to have a Facebook page and post. A manager develops her own plan and organizes it in a way that the brands help each other and don’t compete directly. There are global ideas to follow and  Rustan’s image to build up. You also optimize budget,” she says.

Then again, Rustan’s was famous with the mature clientele but appeared intimidating to  the younger market. “We created an interactive event where we could engage customers, let them come to the counters and have fun things to do,” she says.

The annual Beauty Source invites beauty junkies and glamorous women to enjoy the games, or try out the beauty products and services. “This was a great occasion to tell the younger crowd that we were ready to talk to them,” says Sevrine. The launch heralded the Beauty Addict, a rewards card which offers clients more perks so that they could get more from their cosmetics brand.

Although she will still be connected with Rustan’s, she will certainly miss the familial culture in the Philippines. “Nobody forgets anybody’s birthday. You go to work with a happy heart, and share the joy of seeing your coworkers and finding out what happened.  We do argue, but we say sorry to each other afterwards. I come back and say, ‘I have to voice it out. I didn’t mean to offend.’ Once I’ve said my piece, we move on. People here do care for each other.”

Sevrine will visit the Philippines for training. “I want to make sure the team can maintain the professional standards we’ve put in place and  help everybody grow.”

She knows that nobody is irreplaceable in management. Still, she hopes that she helped her colleagues gain more confidence. “I give them a task to do on their own. You tell them it’s not working and, if they did great, they can call it their own.”

Later in the interview, her son Eliot, 14, asks for merienda. “He wants McDo. No way!” says Sevrine.

The children have adapted to local flavors, and savor favorites such as tinola, sinigang, pancit, instant noodles, corned beef and Spam.

“We don’t eat salty things for breakfast. French culture is baguette, butter, jam, a sweet and a hot chocolate for dipping the bread. Salty is not part of French culture. Eggs and pancakes are super American. Dried fish is not an option,” she says.

Eliot squirms at balut, but he likes dilis. Sevrine recalls that when the children were toddlers, people were amazed to see Filipino-speaking blondies.

The family will always remember the smiles of the Filipinos and their generosity of spirit. Sevrine says her greatest gift from the Philippines is the virtue of patience: “In France, people tend to box other people in and make judgments. Filipinos are more accepting and kind. I hope I don’t lose my patience and that I am kinder when I get back.”