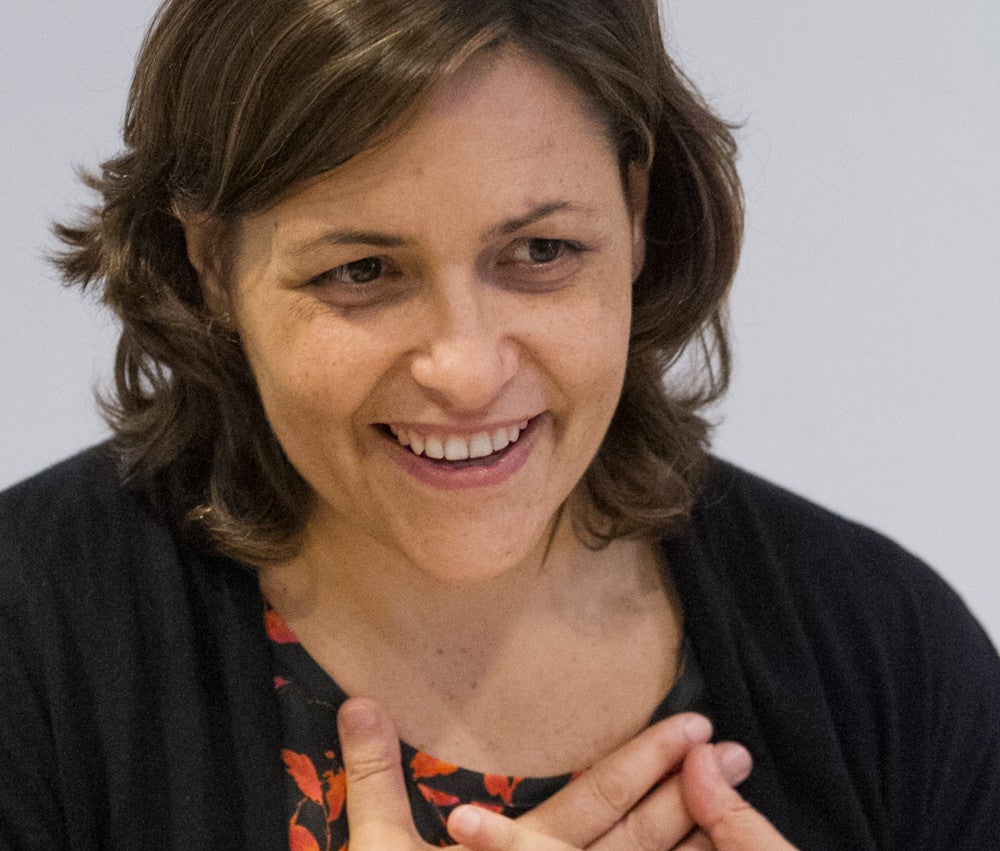 LAURENCE Ligier: “‘If there’s a need in the Philippines, I’ll go there,’ without knowing that I would spend half my life here.”

Healing the scars of incest

The killer came before dawn.

He moored his boat on the opposite bank of the river, stripped naked and swam silently to the hut where his intended victim, a young Frenchwoman, lay sleeping.

“I heard the noise as he broke down the door and I saw the knife,” recalls Laurence Ligier, now 43.

“I didn’t know if he was there to kill me, to rape me, or to threaten me,” she adds.

The killer lunged with the blade, and Ligier knew she had to fight for her life.

Luckily, she had been studying tae kwon do for some years. Adrenalin kicked in, and she found herself instinctively parrying the blows, kicking and screaming.

It was only after the would-be assassin fled back to the river, surprised perhaps at the Frenchwoman’s fierce resistance, that she felt the pain, saw the blood and realized she had been slashed repeatedly on her arms.

“I have the scars, but I was not killed,” says Ligier. “But after that, I asked myself: is it worth it to risk my life for this project?  Maybe I should go back to my privileged world, because if I’m dead, I’m useless.”

“This project” was Cameleon, a center for young girls who had been the victims of sexual abuse, often by members of their own families.

Ligier had founded it in Passi City, Iloilo, in 1997. The name was symbolic of change, from victim to survivor. Cameleon’s motto is “changing colors, changing lives.”

Ligier was an idealistic 19-year-old law student when she first came to the Philippines in 1992.

She had grown up in the picturesque town of Chalon-sur-Saone in the French wine-growing region of Burgundy.

Her father was a doctor, but her altruistic streak came from her mother and grandmother, both of whom involved themselves in helping the less fortunate in France.

“I was touched by that, and I felt that I was a privileged girl, and for my vacation, instead of being a simple tourist, I could go somewhere and volunteer my time and energy,” she says.

Her first thought was to go to Africa, but the French nongovernmental organization (NGO) she approached to volunteer had no programs in that continent. The NGO did have one in the Philippines.

“I said, ‘Where’s the Philippines?’ because most French people don’t know where the Philippines is,” she recounts. “They said ‘it’s in Southeast Asia, 5,000 kilometers  away, and I said, ‘If there’s a need in the Philippines, I’ll go there,’ without knowing that I would spend half my life here.”

She worked with scavengers in Smokey Mountain in Tondo, and went to Aklan, where she learned to speak Ilonggo while establishing a livelihood project for local women.

But her heart went out to young girls, especially many of them who worked as child prostitutes or lived on the streets. She realized that the most vulnerable, the most damaged and the most in need of her help were children who had been victims of rape and sexual abuse, particularly those victimized by their own family members—the victims of incest.

Although she didn’t know it at the time, it was a calling—one that would change her life.

“I felt bad about it, and told myself, ‘maybe I can do a little bit more to help them,” she says. “But I was not qualified because I was young. I didn’t think I could put up an institution. But the Filipinos I was working with and the families of the victims asked me to help them put up a center for street girls, because at that time in Iloilo there were many cases.”

It took a few years.

After finishing her law studies, Ligier went to an international business school to major in NGO management.

Her on-the-job training involved working with the French embassy in Manila and with French NGOs working with Filipino street children.

“It took me years of hardship trying to convince people that a center for victims of incest answered a real need,” she says.  “They questioned me: are you not exaggerating the incidence of sexual abuse? It’s still taboo to talk about it now, even more so 20 years ago.”

The approach Ligier adopted was long-term and comprehensive. Incest is particularly horrific because its perpetrators are men the girls trusted—fathers, brothers, uncles, cousins.

In other cases the rapists are authority figures such as barangay captains, policemen, local politicians, teachers.

Of equal importance is pursuing justice, by filing cases against the abusers.

“Once you win a case, you really see a change,” says Ligier. “The girls start to do well in school, they stop being rebellious, and if the mother finally understands that she needs to protect her child, it’s another step.”

But trying to find justice for the victims is a long, frustrating struggle that is also fraught with danger, not just for the victims, but for those trying to help them.  The wheels of justice grind exceedingly slow, cases drag on for years, and all the while family members exert pressure on the girls to drop the case, using pleas or threats, and in extreme cases, violence.

The attempt on Ligier’s life, for instance, had been preceded by months of death threats, anonymous calls in the night. She would find her tires slashed.

Her would-be killer, she suspects, had been hired by family members of one of the girls she was helping, to try to derail the case that had been filed by Cameleon against them. He was never caught.

Ligier used to get around Passi on her motorcycle, but after the attempt on her life, it was no longer safe.

Some years later, one of her girls, an 11-year-old who had been raped by her cousins and had gotten pregnant as a result, was in her classroom when a gunman opened fire. Luckily, she wasn’t hit, but the attempt drove home the fact that some families would rather see the victim dead than see one of their own in jail for the shameful act of incest.

Ligier’s self-doubt following the knife attack lasted only a moment.

“If you speak to the girls, they rarely quit,” she says. They have a lot of anger in them. They want to fight for their rights. They don’t quit. If I quit, it could have a negative impact on them. I can’t quit.”

Then there are the successes, such as Shaline, a self-assured, articulate young woman of 23 who is now Cameleon’s point person in Manila. It’s hard to imagine how not too long ago, she herself was one of Ligier’s girls.

She became a beneficiary in 2010, when she was 17, a college sophomore in Negros Occidental.

Her teacher, who was in labor, had asked her to accompany her to her house where she was to deliver.

“The same day she delivered the baby, her 63-year-old father raped me,” recalls Shaline.

It was the beginning of a nightmare. The suspect belonged to a family with some money and influence. The case dragged on for years; all the while Shaline was pressured to drop the case.

Luckily, she found Cameleon, which allowed her to finish her studies, take up her master’s, and realize her dream of becoming a teacher herself.

“Every day I had to struggle, every day I had to try, because I had to survive,” she says. “Through the intervention of Cameleon, the psychological and social interventions, I saw things in a positive way again, that there are a lot of reasons to live and to pursue my dreams, and to realize that this is not the end, that I had a lot of things to achieve.”

“It’s the motivation and the inspiration,” she continues. “When a lot of people are supporting you, you feel special and loved. Then there is no reason to quit or give up.”

Although she realized her dream of becoming a teacher, Shaline eventually felt a higher calling.

“I want to be the voice of sexually-abused children, because they are usually not verbally expressive.  I gave up my teaching profession to promote and raise awareness of the advocacy, the cause of Cameleon,” she notes.

Cameleon now has 410 beneficiaries in its center in Passi City, and 35 Filipino staff.

Because of the prevalence of the problem, there are many more who need help. Ligier is opening another center in Talisay, Negros Occidental, but she has to raise at least P30 million to build it.

Ligier says 90 per cent of the funding for Cameleon comes from outside the Philippines, mostly donors in Europe where the organization has satellite offices in France, Luxembourg and Switzerland.

But the economic downturn in Europe, and its current problems with terrorism and the refugee crisis, make fund-raising increasingly difficult.

Ideally, says Ligier, half of the funding for Cameleon’s operations should come from local donors.

“I would like child abuse to be a national cause one day, because right now, after 20 years, it has never been a priority of the Department of Social Welfare and Development, or the government for that matter. So as we advocate, we try to raise awareness, even though it’s still a taboo,” she says.

This, even in a country where the last man to be put to death had raped his own daughters, and where the incoming President has admitted to having been abused as a child by a priest.