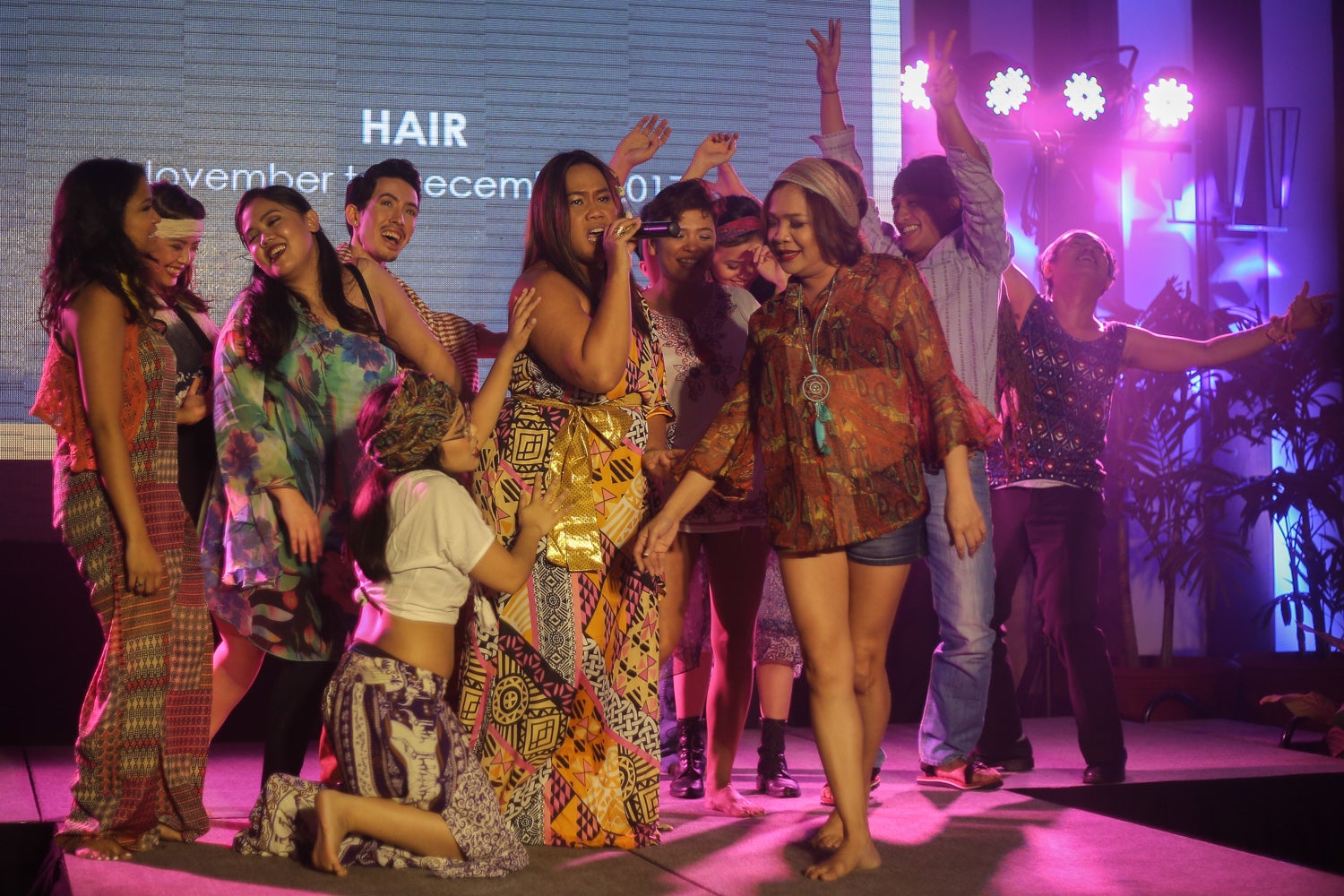 Bituin Escalante and other “Reppers” perform a number from the upcoming “Hair.”—PHOTOS BY JOHN PAUL R. AUTOR

Name your Filipino theater favorite, and most likely, that performer is from Rep.

Repertory Philippines was founded in 1967 by partners Carmen “Baby” Barredo and Zenaida “Bibot” Amador—the duo who dared to bring season after season of Broadway and West End plays and musicals to the Philippines.

After Amador’s death in 2008, Barredo stayed on as Rep’s “chairman for life,” and as an occasional performer. Together with her sister Mindy Barredo Perez-Rubio, Rep president and CEO, she recently unveiled Rep’s new logo and the 2017 season line-up at the “Rep Turns 50” event.

“Rep’s vision 50 years ago was to develop a love for theater and the arts in the country, and that vision has been met,” said Perez-Rubio. “We have reached a premier status that can never be achieved by any other theater company. We are the alma mater of so many.”

At Rep, actors have to undergo training in all types of theater—Shakespeare, the classics, Greek tragedies and comedies—even if these don’t sell well with the audience.

“Theatergoers prefer comedies and musicals, so we give them that; but we still try to include a classic or a drama,” said Perez-Rubio. “Zenaida Amador maintained that, in choosing plays, there should be one play for the soul, one for the heart, one for the family and one that makes everyone happy. We still strive to follow this.”

Rep will be closing its 2016 season with “A Little Princess,” a musical written by Brian Crawley, with music by Andrew Lippa. Dexter Santos, Dulaang Unibersidad ng Pilipinas artistic director, directs the musical, which runs Nov. 18-Dec. 18 at OnStage in Greenbelt 1, Makati.

In 2017, theatergoers can look forward to “Vanya and Sonia and Masha and Spike,” a comedy by Christopher Durang, and “Agnes of God,” a mystery-drama by John Pielmeier—both to be directed by Guingona.

Rep also takes pride in being “the only theater company that consistently produces a theater season, plus a children’s theater that runs for five months,” said Perez-Rubio.

In 2017, kids can watch “Beauty and the Beast,” to be directed by Virata. Children’s theater has been a prime advocacy of Virata and Rep.

That, along with providing actors the space for professional work—a paying job in theater.

“These productions consistently give theater people and actors the means, support and earnings to continue their passion for performing on stage,” said Perez-Rubio.

“At first, Rep attracted only politicians, socialites, the diplomatic corps,” she recalled. “Now we have students, artists, yuppies and a strong middle-class following who, at one point, were touched by our performances, and now keep coming back.”

The Rep babies who have established their own theater companies (among others, Gemora has Trumpets; Wilson has New Voice Company; Guingona has Actors Actors Inc.; Cris Villonco, Ana Abad Santos, Rem Zamora, Jenny Jamora and Topper Fabregas have Red Turnip Theater), also regularly return, either as actors or directors.

“Rep supports and rallies behind each and every theater company. We do not consider them competition,” said Perez-Rubio. “Having them around encourages us to train the young artists better through the Rep workshops.”

On June 10-11, 2017, at The Theatre at Solaire, several generations of “Reppers” will perform in the “Fiftieth Gala Production”—a reunion show open to everyone who has been part of Rep’s story, said Perez-Rubio.