Tender, unconditional love in ‘Eurydice’–but not from its young lovers | Lifestyle.INQ ❮ ❯ 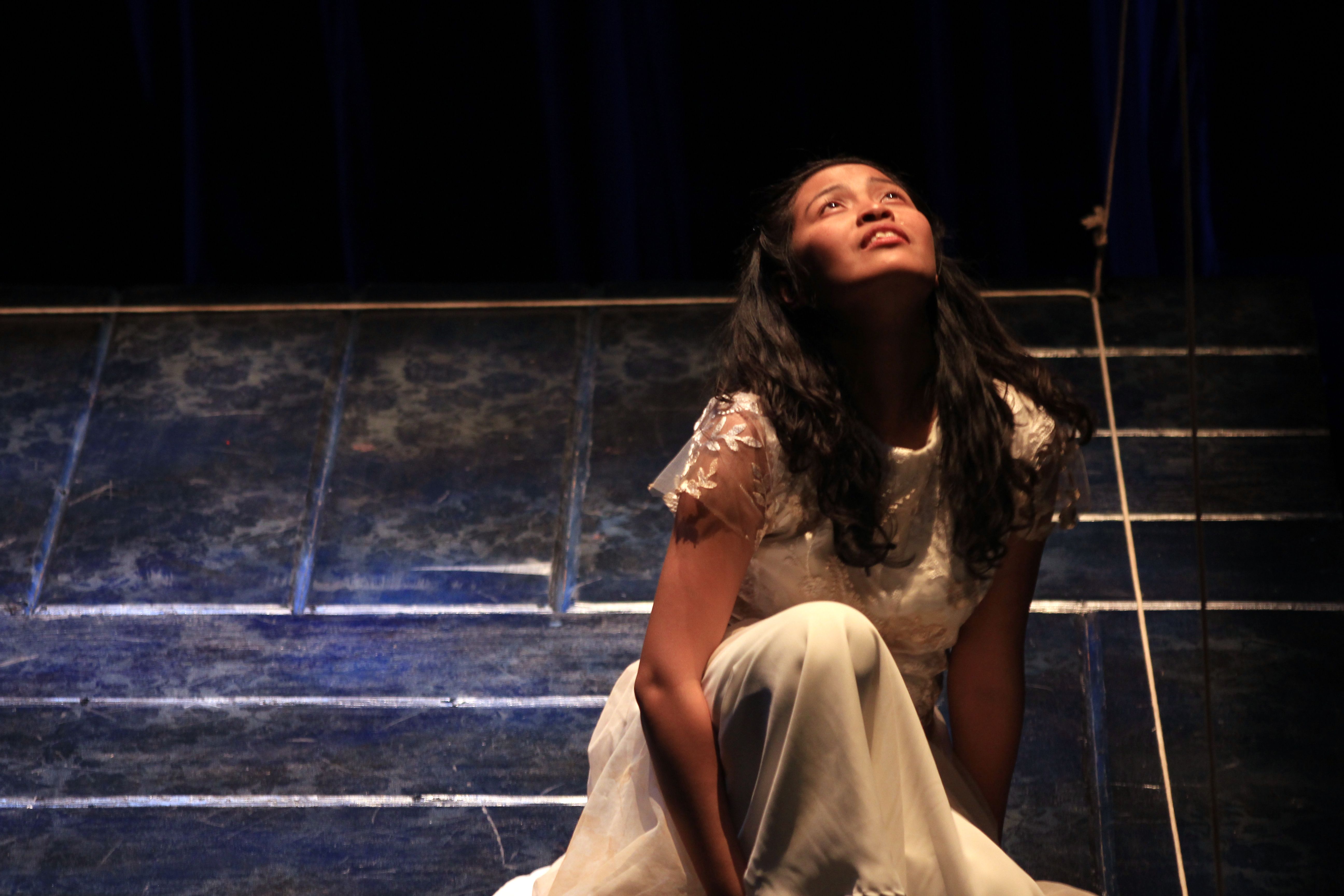 Lhorvie Nuevo as Eurydice in the Tanghalang Pilipino production of Sarah Ruhl’s play, adapted by Guelan Luarca and directed by Loy Arcenas—PHOTO FROM TANGHALANG PILIPINO

Tender, unconditional love in ‘Eurydice’–but not from its young lovers

One of the happy surprises in watching Tanghalang Pilipino’s “Eurydice” was listening to the whispers of the mostly college-age
audience.

These weren’t the usual bored complaints about being dragged to a live performance during their sacred weekend. The respectful, hushed conversations were smart observations or incisive questions about what was happening on stage.

And when some of these young girls took more interest in the “father in the play,” it was an indicator that the play had hit its mark.

Actor Marco Viaña, who plays the heartthrob-like main character Orfeo, does what he could admirably with what the playwright Sarah Ruhl has given him.

But ultimately, Ruhl’s modern reimagining of the Greek tragedy about Orpheus’ doomed romance with Eurydice becomes a tender, contemplative, but no less searing treatise on the true nature of unconditional love between father and daughter.

Turning the stereotype on its head, romantic affection in this production falls second to the filial bond.

Dig deeper and there are other Elektra complexes in Ruhl’s material (translated to Filipino by Guelan Luarca). Two other father figures vie for Eurydice’s heart, although they are far less noble than the ideal dad, perfectly played with restrained charm and grace by Julienne Mendoza (Audie Gemora alternates in the role).

Jonathan Tadioan essays these two secondary characters with cunning and barely leashed lust: the mysterious guest who teases Eurydice (Lhorvie Nuevo) about the circumstances of her father’s death, and Hades, who claims her at the end.

In the original Greek tale, Orpheus was the focal point of the story. The young poet-musician loses his lady to death and braves the gates of the underworld with his powerful music to win her back.

Hades concedes—on one condition: that neither he nor the soul of Eurydice interact with each other until she crosses the boundary between his kingdom and the world of the living. But the two lovers can’t help it, and the violation of that condition sends Eurydice away from Orpheus’ arms forever.

At the Cultural Center of the Philippines Little Theater, a square platform becomes the center of the abyss. An actual  elevator descends to this stage to bring the newly departed. Faded red strips of cloth evoking memory and music are the only connections to the world above.

In this limbo, souls shed their memories and turn into nameless, meaningless ciphers. But the father-daughter interplay between Mendoza and Nuevo lights up the grimness of the place. Under Loy Arcenas’ capable direction, the seeming ordinariness of their conversation is what gives the play meaning, the simple retrieval of memories a way to regain their humanity.

Here, in the infinite graveyard of the dead, the audience appreciates with a particularly bittersweet tinge that done-to-death greeting-card proverb that exhorts gratitude for each second lived, because there is no guarantee of a tomorrow.

Nuevo’s Eurydice is sweet, smart, vulnerable and feisty. But from beginning to end, she remains the frail little girl her father protected, and does not grow into the adult, wily woman who brought passion to Orfeo’s music.

And it is that guileless nature that damns these lovers in the end. Ruhl does not leave any ambiguity as to the culprit that seals their fate. In the Greek tale, it is Orpheus who looks back at Eurydice, out of excitement at their pending reunion. In this play, Eurydice makes her own choice consciously and of her own free will.

In that one second, the little girl finally transforms into a woman—by choosing to return to her childhood and the unconditional love it represented. Everybody loses, and Hades gets the chance to mock that it was all inevitable, that every soul eventually ends up in his realm.

But, for a quick yet unrushed two hours, there is light in that gloom: Mendoza’s father, who neutralizes the specter of death by showing his daughter what it means to live and love, right in the epicenter of darkness.—CONTRIBUTED