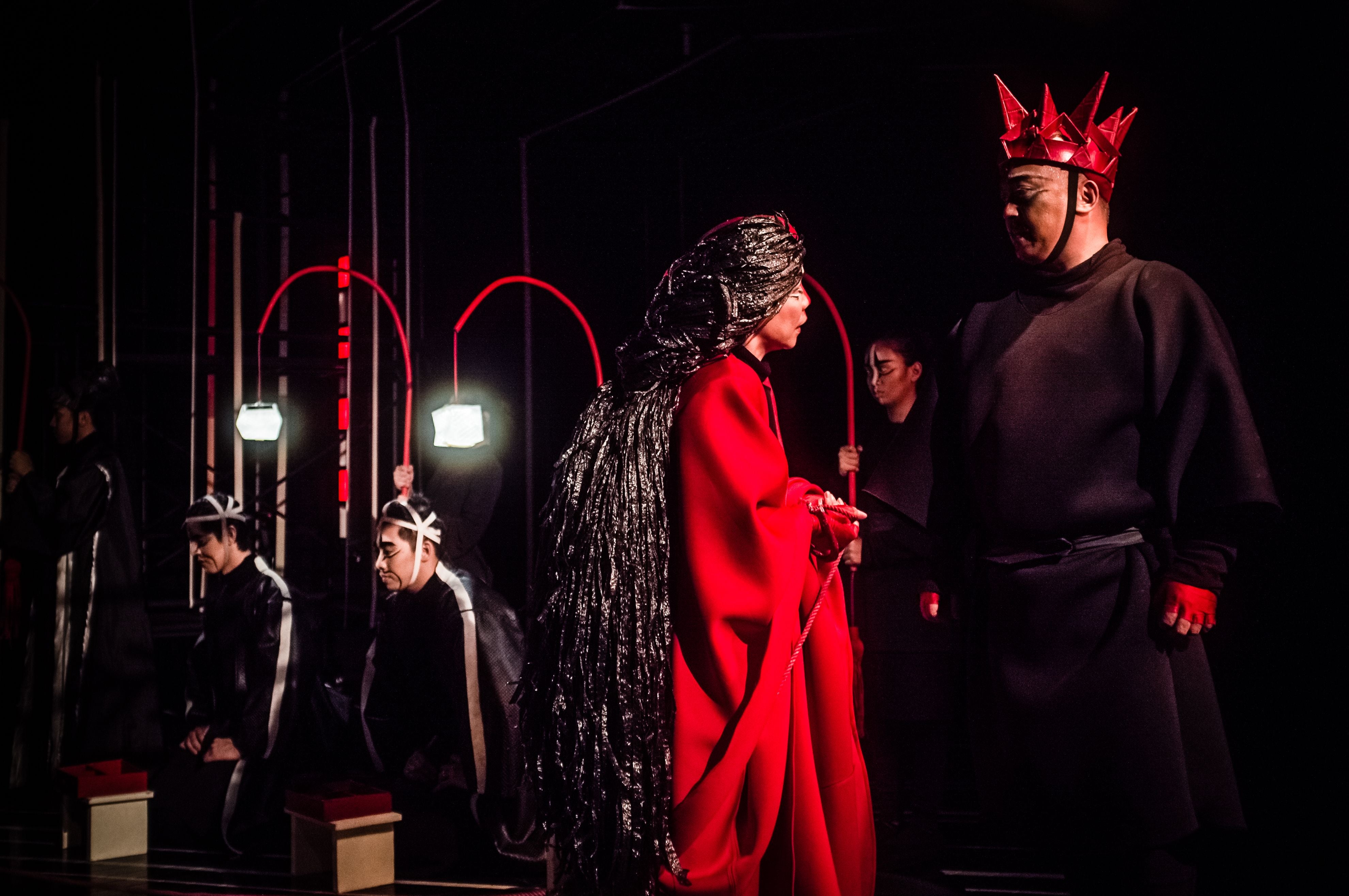 A mesmerizing yet confounding ‘Makbet’

George de Jesus III and Irma Adlawan are an enthralling pair as the manipulative, murderous titular couple in the Filipino translation of Shakespeare’s “Macbeth” at the St. Benilde Blackbox Theater.

Their performances alone, their effortless command of language and the unwavering dramatic heft they summon in this nearly three-hour production, are enough to keep viewers awake and glued to their seats.

Here are two actors who visibly listen to each other and grasp the full extent of their onstage relationship. To see them play out this twisted husband-and-wife dynamic is, in effect, to understand the origins of greed, despair and hunger for power pervading this Shakespearean tragedy.

The same cannot be said of the rest of the cast, who mostly don’t seem to understand their lines or have a difficult time internalizing their characters—a lamentable disservice to the script. The story of the Scottish general who, upon the prodding and scheming of his wife, goes on a killing spree to fulfill a prophecy promising him the throne is here rendered in vivid, lyrical Filipino by the late Rolando Tinio.

Tinio’s translation, like his work on the other classics that recently saw life in Manila (“Pahimakas sa Isang Ahente” for “Death of a Salesman,” “Tiyo Vanya” for “Uncle Vanya”), retains the play’s setting, the foreign names and places unchanged.

It’s a technicality that should affect director Nonon Padilla’s “Asian-ification” of the material, but actually doesn’t. Reuniting with designer Gino Gonzales, with whom he previously collaborated on “Haring Lear” (Shakespeare’s “King Lear” as translated by Bienvenido Lumbera), Padilla’s “Makbet,” on occasion, even calls to mind Akira Kurosawa’s “Throne of Blood.”

The characters are dressed in flowing black robes, their faces splattered mask-like in red and white, even as they talk of England and Scotland, thanes and kings. During the pivotal feast scene, everybody sits cross-legged on the floor drinking from traditional teacups. In battle, some of the warriors wield katana.

While Kurosawa’s film was a complete transposition of Shakespeare into a feudal Japanese milieu, Padilla’s “Makbet” is a more placeless, figurative approach—a “reenactment of the Fall of Man from the Garden of Eden,” as he writes in his program notes.

And this so-called reenactment has no shortage of ravishing moments. Especially in a couple of crucial scenes when Gonzales’ scaffolding set, dominated by lines of paper, looms toward the audience, “Makbet” can be a feast for the senses.

Too often, though, Padilla’s method is blurred by his excesses, and the effect is a production that is curiously so many things at the same time.

A video camera manually handled by an ensemble member is used to project certain scenes onto several monitors. When this theatrical device succeeds, the viewing experience acquires a more visceral punch, like being privy to a crime being committed. Such moments are hard to come by, though.

An extended epilogue attempting to establish a Catholic connection with the play simply falls flat and comes across as dispensable, if not overindulgent.

Then, there’s the use of the entire theater as set: Sometimes it elevates the immersive viewing experience; other times it becomes a literal application of the phrase “all over the place.”

As a thesis production in technical theater, “Makbet” should earn top marks for those involved; in the larger scheme of things, however, even the Asian influence starts feeling unnecessary, as if just another (exquisitely rendered) piece in this gimmicky puzzle. The connection to Eden, meanwhile, is all but forgotten.

In those moments, one can’t help returning to De Jesus and Adlawan’s performances—twin examples of focus and truthfulness in the face of all that artistic razzmatazz. —CONTRIBUTED