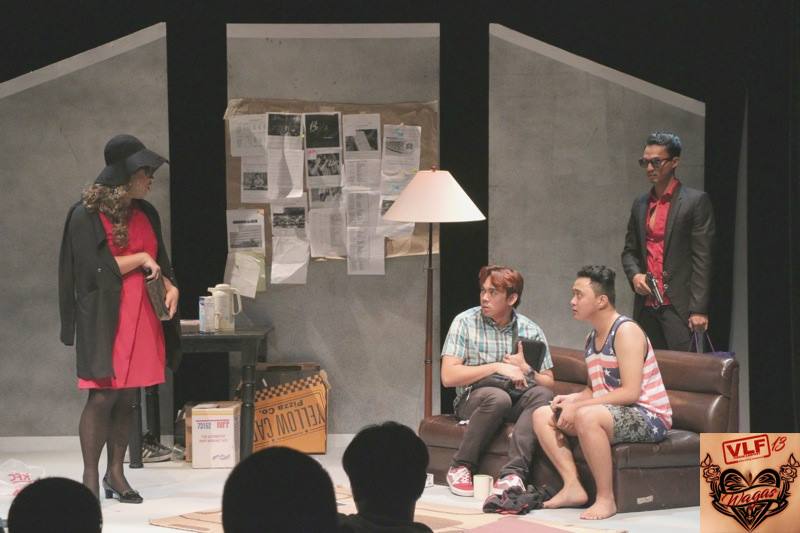 Culled from a record of 192 submissions, the 12 new plays presented at the ongoing 13th Virgin Labfest (themed “Wagas”) at the Cultural Center of the Philippines is quite a mixed bunch—none of them as drop-dead terrific as, say, 2015’s “Si Maria Isabella at ang Guryon ng Mga Tala.” Some even glaringly violate the timeworn literary mantra “kill your darlings”—that calls against self-indulgence, in favor of brevity and purposefulness.

An example is Rick Patriarca’s “Birdcage”—a simple conversation between two long-time employees of a BPO company, but through poignant use of details and subtext, unveils this festival’s most convincing realist writing.

Here, Patriarca displays a deft hand at naturalistic, observant dialogue—the antithesis to his louder-than-loud “Hapagkainan” from last year. And Aldo Vencilao and Gie Onida (in one of the year’s most compelling performances) fully embody the millennial struggle between passion and practicality, cynicism and optimism.

The final scene, however, is a stumble: Vencilao’s character launching into a long-winded memory monologue that merely reiterates previously presented ideas. Absent this portion, the play would be tighter, if not more powerful.

Adrian Ho’s “Sincerity Bikers’ Club” tackles the government’s war on drugs from a small town perspective, examining how a local biking club is torn apart by fear and paranoia upon knowing its newest member is the widow of an alleged addict.

But the play deliberately invents its own conflict, its characters seemingly existing in a vacuum. If the club is really as tight as the play makes it out, shouldn’t there have been a discussion on this issue beforehand? And though it digs deep in portraying herd mentality, the play eventually settles for the platitudinous and predictable.

Still, it is easy to be swept away by the fine dramatic tension produced by Jenny Jamora’s incisive direction, and an ensemble that really knows each other’s rhythms.

The same can’t be said of Joshua Lim So’s “Boses ng Masa,” directed by Guelan Luarca. The whole play is about Chris and Hector, employees of a political campaign, arguing whether or not to publicize a sex scandal that will damage their rival.

What damages this play, though, is the character of Chris (played by Jerome Dawis)—so thinly written and thinly acted that Renante Bustamante as Hector simply swallows him whole. Its question-and-answer format used to better effect in “Sincerity Bikers’ Club,” the play is only topically engaging and its ending, obviously intended for shock value, only cheapens this laborious, drawn-out affair.

In Oggie Arcenas’ “Love Team,” directed by Michael Williams, a debuting artist and a washed-up artista reunite long after the demise of their onscreen love team. The conversation here is two-pronged: one arm on celebrity status and the price of fame, the other on modern-day gay romances.

But what to make of a play that not only repeats itself, but repeats itself twice? Wrap it up 20 minutes earlier and nothing vital would have been subtracted from its message. One suspects its undisciplined length only serves to delay the eventual crowd-pleasing, kilig-producing kiss between its actors.

Ryan Machado’s “Ang Mga Puyong,” directed by Ricardo Magno, is also a curious selection: It is inherently Jerome Ignacio’s “Kublihan” from two years ago, sans the nimble handle on subtlety and character shading.

Two boys coming of age in a relatively isolated place, who may or may not have feelings for each other—a premise neither untried nor untested. In fact, it is so formulaic, one can already intuit where the story is heading, despite the loquacious dilly-dallying and the play’s attempts at slowly overwhelming the viewer with one scandalous revelation after another.

The dilly-dallying is even less tolerable in Layeta Bucoy’s “Si Dr. Dolly Dalisay at ang Mga Ladybugs,” which tries to merge the alienating world of scientific research with the maudlin universe of TV soaps.

And like a soap, the play, directed by Jonathan Tadioan, force-feeds its audience with careless dialogue and conspicuously inserted dramatic moments, its idea of humor a scenery-chewing Celeste Legaspi playing trashy, cruel mother to Dolly de Leon’s smug scientist, who harps on and on about her “PhD in Entomology.”

Conversely, Sari Saysay’s “Ang Bata sa Bus Stop,” directed with an eye for tenderness by Topper Fabregas, is a play that doesn’t aim for literal largeness so much as the metaphorical kind, concerning itself with a priest about to leave the monastic life behind.

At the titular bus stop, the priest encounters a rather precocious boy who asks him questions he isn’t ready to answer. Then, distinctions are blurred, as the viewer finally realizes who the boy is.

But by the dawning of that revelation, what this play has become is one very long homily. It tells and tells instead of showing, and hardly takes chances, barely exploring the sociorealistic points it throws up in the air.

Eliza Victoria’s “Ang Bahay sa Gitna ng Kawalan” uses the playwright’s expertise in speculative fiction to bring horror into the theater. One can imagine how successful this story might be on the page, where transcendence of consciousness and rationality can be elucidated in more precise detail.

Onstage, however, those fantastical elements don’t translate well, given the constraints of linear storytelling. The production is a bamboozling mess, the actors playing on different registers of horror and George de Jesus’ direction barely able to splice them together. This is psychological horror meets the supernatural meets campy “Shake, Rattle & Roll,” and being everything at once isn’t always a good thing.

In Carlo Vergara’s “Dear and Unhappy,” only Cris Villonco, as a neurotic, disoriented Josephine Bracken, seems to be in on the joke.

Vergara writes fully realized female roles, from “Kung Paano Ako Naging Leading Lady,” “Mula sa Kulimliman” and now here. But this production, directed by Ricky Villabona, isn’t as assured as his previous work. The play already loses itself in the first half, striving to include as many points of discussion as possible— American colonialism, feminism in the prefeminist age and even the humanization of our most revered heroes. The resulting production feels inchoate, the magical character played by Bernardo Bernardo functioning as a mere device.

‘Pilipinas Kong Mahal with All the Overcoat’

In the end, three comedies prevail. Eljay Castro Deldoc’s “Pilipinas Kong Mahal With All the Overcoat,” directed by Roobak Valle and Tuxqs Rutaquio, can use some trimming but it proves to be a highly ambitious and imaginative piece in tackling the advent of fake news.

Ambet (Paul Jake Paule, making the most out of a redundant character) and Nato (Fitz Bitana, electrifying) are the brains behind a website that peddles untruths. On the verge of greater recognition, Ambet has a change of heart, putting him at odds with Nato, who sees the site as nothing more than a cash cow.

All things considered, this is the most successful among the entries that deal with current events. This is Deldoc as master of farce: Look no further than the supporting turns of Chunchi Cabasaan (as the emissary of a certain despotic family from Ilocos) and Anthony Falcon (a riot as a fundamentalist minister).

Dingdong Novenario’s “Nothing but Dreams” is a pitch-perfect amalgam of black comedy and realist drama. Transposing the Tracy-Hepburn classic “Guess Who’s Coming to Dinner” into a Filipino setting, Novenario’s script is both urgent and realistic, given the casual racism rampant in present society.

Directed by Carlos Siguion-Reyna, with a strong ensemble led by Audie Gemora and Madeleine Nicolas, “Nothing but Dreams” is proof that theater can be polarizing yet downright convincing. To paraphrase a cliché, it hurts because it’s true.

Finally, this Labfest’s most satisfying entry is Maynard Manansala and U.Z. Eliserio’s “Hindi Ako si Darna,” which is basically a study of the superhero in a postsuperhero age.

Although bloated in parts and rather slow at the start, the play is still a rollicking laugh trip—intelligent without being pompous, hilarious without being excessive. The first-rate ensemble, which includes Tetchie Agbayani as a now grandmotherly Darna, Ricci Chan as a bitter, faux-British Ding and John Lapus as an out-of-shape Valentina, confidently heave this play to comedic heights.

“Hindi Ako si Darna,” directed by Andoy Ranay, doesn’t pretend to be anything other than the all-stops-out entertainment it is. And in the modesty of that ambition, it proves to be a bigger, more resonant piece than many other entries. —CONTRIBUTED