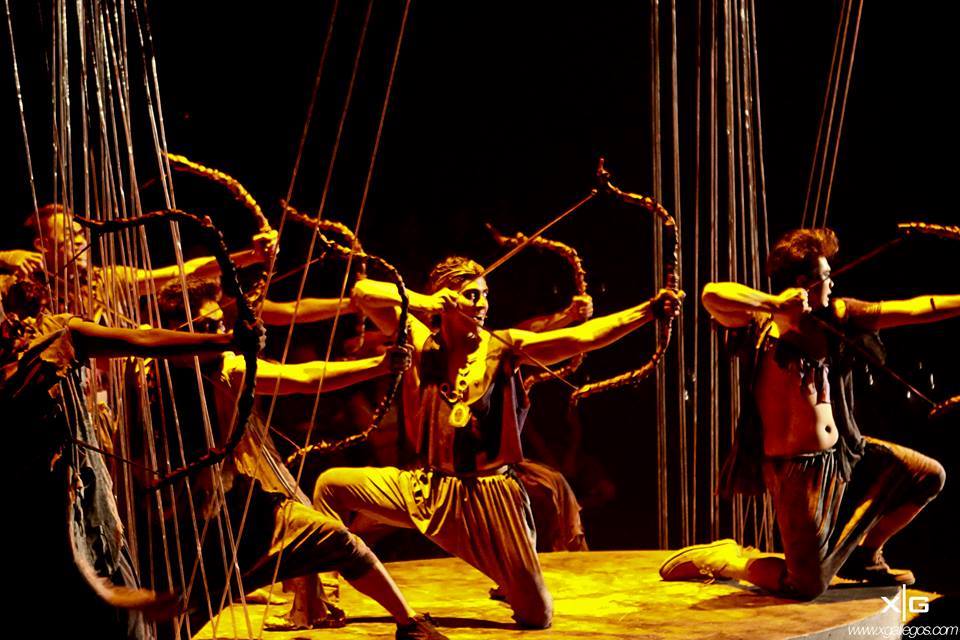 Although most better-known theater companies were relatively quiet in mid-October (with the exception of Tanghalang Pilipino’s outstanding “Ang Pag-uusig”), Manila theater did not lack for satisfying fare with a range from the exotic to the comic.

These are three of such offerings, with little in common other than imagination and inventiveness.

‘Fly Me to the Moon’

Artist Playground’s (AP) “Fly Me to the Moon,” a one-act play (less than an hour long) by Rody Vera and a companion piece of sorts to another play of his, “Happiness is a Pearl,” is in the company’s by-now signature style of daring theater, melding emotional and physical violence, lush eroticism and exotic ambiance.

In this arresting story of the encounter between a contemporary Filipino gay transgender-wannabe and a Karayuki-san (a Japanese sex slave from another time), AP may have outdone itself in out-of-the-box material. Inevitably, audiences are bound to have conflicting feelings about the play. There may be legitimate questions about the seemingly improbable premises of the story, or whether the unremitting mood of violence is warranted.

But two aspects of the production make it a should-see. One is its baroque richness of atmospherics, a hallmark of AP’s productions: the evocative sets, the play of light and darkness (sometimes to a fault), the impressive use of constricted space to heighten menace, even the almost elegantly staged scenes of rape and death.

There were brilliant directorial touches (by Paul Jake Paule), like the ship’s captain addressing the terrified Melanie in Japanese, while the Japanese Karayuki and her “cat” intoned a translation upstage.

The cast—from the two leads, an arresting juxtaposition of an elegant Karayuki and a raunchy Melanie, to the ensemble supporting them—put on what could only be called a very brave performance, down to the daring scenes of semi-nudity.

Not everything went ideally: there were moments when the dialogue did not come through clearly. But overall the production was a visual, almost tactile treat.

The other notable aspect of the play was its theme: the parallelism between two worlds and ages linked by the cruel persistence of issues such as abusive power, exploitative gender relations, family and love as both hope and bane. A linkage heightened by the irony that one victim had Japan as his/her lodestar as escape from a hard Philippine life, while the other had been sold by her Japanese family to slavery in Southeast Asia. The more things change…

Whatever one’s cavils about the play’s specifics of plot or character, its overall arch is a chilling portrayal of the eternal tragedy of life for the downtrodden of whatever society.

Art Theatre Manila is apparently the newest kid on the theater block, with a declared focus on Asian theater offerings, and if its first production is an indication, it will be an exciting addition to the local scene.

“Sakuntala,” an adaptation by Allan Palileo of an Indian classic play (itself, going by program notes, adapted from an earlier epic), was wonderfully staged (direction by Joey Ting) with evocatively economical stage design (clusters of strings suggesting both forest and palace), vivid costumes and rousing choreography.

The adaptation (a formidable undertaking from an original seven-act play) retained the flavor of an exotic culture and era while rendering it relatable to a contemporary audience. Indeed, much of it may well appeal to a Filipino sensibility.

The leads, played by Chase Salazar and Vincent Pajara (they had alternates in Matel Patayon and Paul Cedrick Juan), were physically striking and sympathetically performed, but the gem of the production was the comic down-to-earth sidekick character of Madhavya, played by Gabo Tolentino: I missed him when his role was scaled back in the latter part of the play. The ensemble, meanwhile, did a sterling job in evoking a whole social and cultural setting.

Where I did have a bit of a cavil was the rather unbalanced story development. The first portion, running over an hour, was a leisurely account of the course of the courtship of the leads, entertaining and charming with comedic touches, reminiscent of a Shakespearean romantic comedy with its forest setting.
But it rather abruptly segued to a second part, shorter in duration, with a much darker tone where a lot of dramatic events felt almost rushed and underdeveloped: the curse that initiated the crisis of the play and the ring that resolved it both insufficiently prepared-for plotwise.

Nonetheless, this production of “Sakuntala” is a memorable production and, if the company pursues its ambitious goal of bringing little-known Asian theater material and forms to the local stage, should represent a welcome broadening of theater horizons, generally oriented as the local scene is to Western classical and popular genres.

A contrast to most of this viewer’s theatrical fare the past couple of months was Ateneo Entablado’s “Batang Rizal,” both in its lighthearted tone and its nonprofessional character as a student production.

Indeed, it was something of a pleasant surprise. Having watched the same play years ago in a professional Peta staging (one of my favorite Peta children’s plays), this viewer had approached it with managed expectations.

But this almost completely student-cast play, directed by Jerry Respeto, turned out to be so thoroughly enjoyable that I felt quite gratified at the end. I found the stage design (scene changes through flipping giant book pages), simple period dress, infectious songs and choreography all delightful, and I loved Christine Bellen’s play combining imagination, humor and didacticism with a light hand.

Some may find the production a trifle long with perhaps a song or two too many, but personally I felt rather sorry when it ended.

And the student performers? Sure, there was inevitable unevenness, a song rendered with shaky audibility here, an overdone group hysterics scene there. But on the whole the kids performed admirably with great comic timing (I had the most laughs since “Spamalot!”), engagingly cheeky emoting (particular kudos to the two leads, Vino Mabalot as Pepito and Albert Reyes as Pepe, who combined ingenuousness and heart), and overall singing and dancing while hamming it up with aplomb (that “Pagong at Matsing” rap number was a gem).

All in all, a welcome relief from the dark and heavy themes I had been absorbing (in theater or otherwise) these past months, without yet jettisoning social or educational content. —CONTRIBUTED