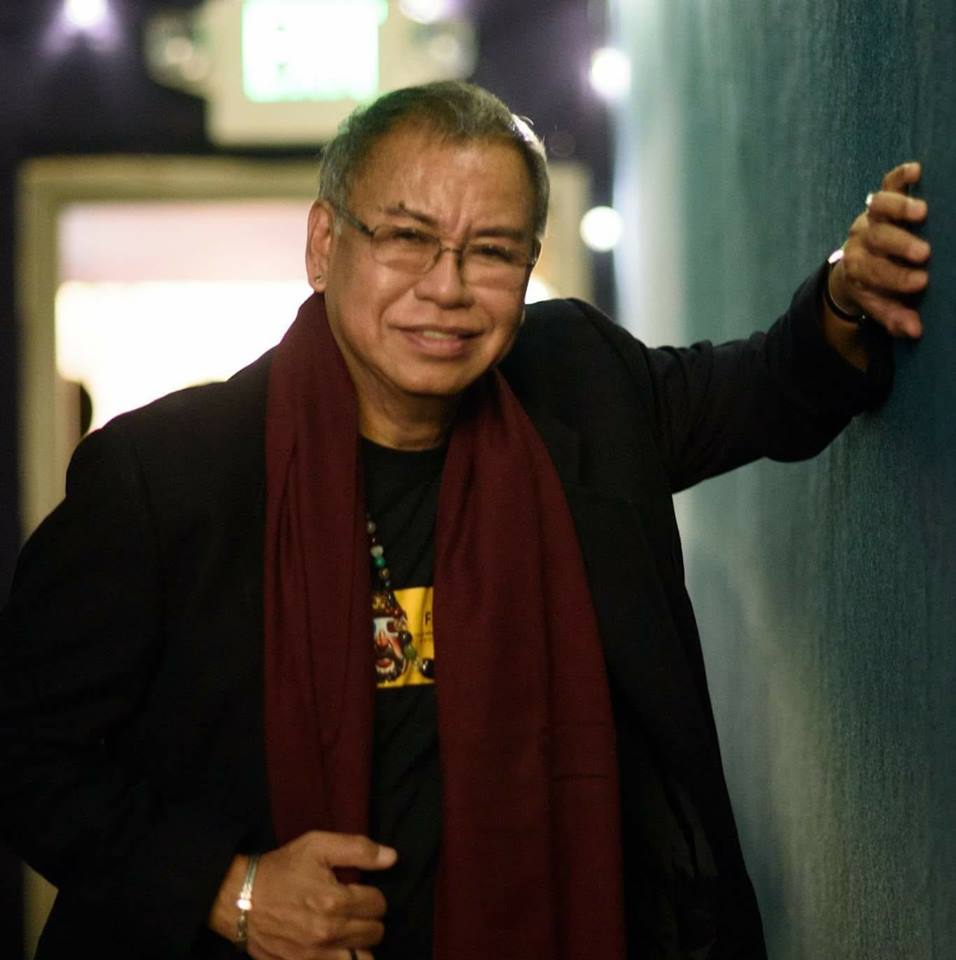 Bernardo Bernardo, 1945-2018: “Bernardo Bernardo is my real name. I was supposed to be Emmanuel Pedro Meliton Jr., but my father suprised my mother. I was called ‘Bernardo squared’ way before I knew the math.”--PHOTO BY BEN VILLAO, FROM BERNARDO BERNARDO'S FACEBOOK PAGE

The family of Bernardo Bernardo announced the actor-director’s passing this morning. Bernardo, 73, succumbed to tumor in the pancreas, which he himself revealed in January through a Facebook post.

He was two years shy of celebrating 50 years in entertainment, as a multitalented, versatile and prolific performer who made a major mark across the various mediums of film, theater and television. In a 2014 interview in this paper with writer Pablo Tariman, he described his by-then four-decade-long career as a performer, especially as a theater artist, as a “fabulous ride… 44 years of treading the boards, as they say, if you’re lucky enough to land a job. But, mostly, before the advent of the Internet and smartphones, it was trade papers, phone calls, auditions—basically, pounding the pavement. As a theater lapel button states, most of the time, ‘Life is a constant audition.’”

Bernardo was born in Santa Ana, Manila, on Jan. 28, 1945, and was a journalism graduate of the University of Santo Tomas in 1966, even becoming editor of the UST Varsitarian.

“I thought I was going to be the Philippines’ next great journalist,” he recalled. “You know how stupid and delusional one can be when you’re young. And then I saw my first professional theater production, a British Council-sponsored run of Robert Bolt’s ‘A Man for All Seasons’ at the Philamlife Theater. That’s when my life changed. I decided I wanted to be a stage actor.”

Of his fascinating name, the actor-director said: “Bernardo Bernardo is my real name. I was supposed to be Emmanuel Pedro Meliton Jr., but my father suprised my mother. I was called ‘Bernardo squared’ way before I knew the math.”

A “triple threat” performer—he could sing, dance and act—Bernardo got his masteral degree in Theater at the University of Santa Barbara, California, in 1969, and had further training in acting in such institutions as the American Conservatory Theater in San Francisco and the London Academy of Music and Dramatic Art. Thereafter, he became a staple in the local theater scene, appearing in both Filipino and English productions, straight plays, musicals, sarsuwelas and dinner theater.

According to the 1994 edition of the CCP Encyclopedia of Philippine Art, “He has performed at the Cultural Center of the Philippines in productions of the Batingaw Theater Guild, Playhouse Seventies, Fourth Wall Productions, Babaylan Theater Group, Zarzuela Foundation of the Philippines, Barangay Theater Guild, Teatro Pilipino, Bulwagang Gantimpala, and Tanghalang Pilipino. He has also appeared in numerous plays staged by Repertory Philippines from 1973 to 1989. He is best known for his performance in the dinner shows “The Rocky Horror Show” as Frank N. Furter, 1983; and “The Boys in the Band,” as Bernie, 1977.”

His other landmark roles would include Katy de la Cruz’s Tatay in the original production of the musical “Katy!”, directed by Nestor Torre for Musical Theater Philippines; and Takyong Bagting, a taong grasa, in “Bien Aligtad,” directed by Joel Lamangan for Bulwagang Gantimpala.

Bernardo’s foray into film and television was just as storied: He won an Urian Best Actor award in 1980 for his role as Manay in Ishmael Bernal’s “Manila By Night,” and another Urian, for Best Supporting Actor in 2016, for Lawrence Fajardo’s “Imbisibol.” On TV, he would appear in such long-running programs as “Flor de Luna,” “Vilma Tonight,” “Labs Ko Si Babes.” A generation of Filipino TV watchers came to know him as the flamboyant, cantankerous but kind-hearted Steve Carpio in Dolphy’s beloved sitcom “Home Along Da Riles” and its spin-off movies.

It was after “Home Along Da Riles” that Bernardo decided to migrate to California, staying there for 12 years. While in the US, he continued to perform and received acclaim for appearing in theater productions that focused on the Filipino migrant experience, among them “Alaskeros,” staged at Perseverance Theater; “Voyage,” about the lives of four generations of Filipinos in Alaska; and, especially, “The Romance of Magno Rubio,” which won a raft of nominations and awards from American critics and publications and toured Chicago, Los Angeles and New York.

“My theater training and acting experience proved very helpful in my control of my body and voice in acting,” said Bernardo in the 2014 interview. “Hitting your marks, knowing cues, being aware of your key lights, movements… Continuity of action/emotion for close-up and angle changes were easy enough to learn. But the key lesson was to be natural, or to underplay.”

In front of the camera, on the other hand, he learned—“take your pick: Patience. Stillness. Compromise. How to conserve energy. How to laugh off delays. How to sleep while seated and waiting for your next scene.”

Bernardo’s last stage appearance was in Red Turnip Theater’s sci-fi drama “The Nether,” in March 2017, for which he was nominated for an Aliw Award for Best Actor in a Non-Musical. (He was an Aliw awardee as best male performer in hotels and nightclubs in 1986.)

Before “The Nether,” he played King Lear in 2015, in a Filipino translation of Shakespeare’s play by National Artist Bienvenido Lumbera directed by Nonon Padilla and staged at De La Salle-College of St. Benilde. (Inquirer reviewer Cora Llamas hailed it as “a tour-de-force performance”.)

Bernardo was 70 when he did Lear, and he called it his “comeback”: “I’m scratching my 70-year itch! It’s legacy time. Whatever experience and expertise that I can share, now’s the time to do it,” he said, adding, with typical Bernardo Bernardo humor: “I won’t be like [Repertory Philippines founder] Zenaida Amador na liliparan ka ng silya, or Ishmael Bernal na liliparan ka ng ashtray. Ako na lang siguro ang lilipad.”

He did get to teach formally—as head of the theater arts program of MINT (Meridian International) College in Taguig City. He also put up his own theater company, Studio Connections International, which he said aimed to “form alliances among performing arts companies in order to raise professional and artistic benchmarks in educational Philippine Theater.”

“Theater acting is the closest one can get to living out the concept of reincarnation,” he pointed out to this paper. “With each new role, one gets reborn. You basically create a whole new human being’s life story until the final curtain falls. And, on top of the applause (the old addiction to acceptance and recognition), you get paid for it!”