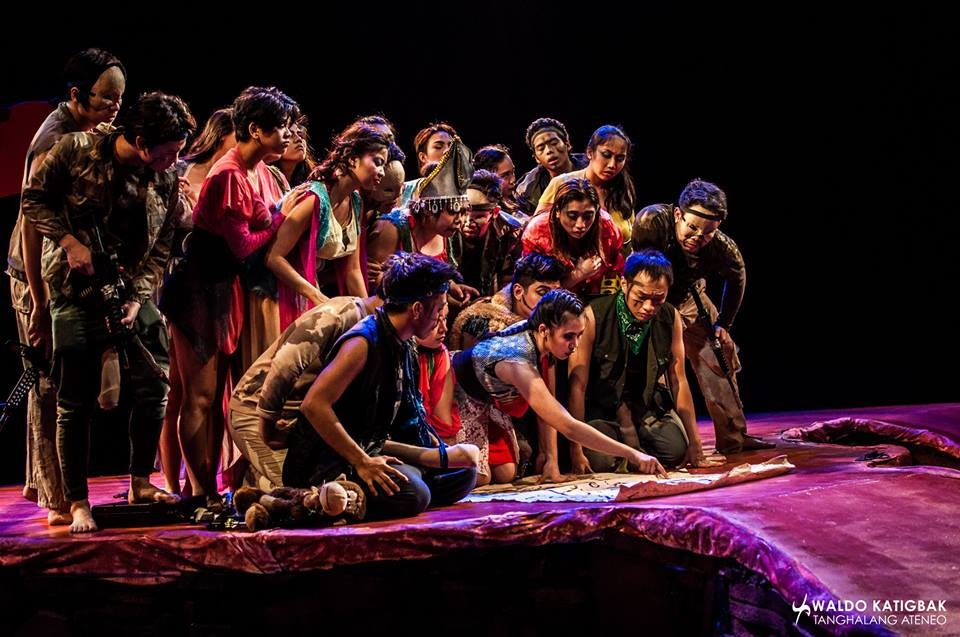 Over the past couple of weeks, there has been a spate of arresting theater offerings, mainly student productions, on campuses. While vastly different from each other, a common set of attributes may be applied to them: brave (even audacious), creative, out-of-the-box.

At the College of St. Benilde’s high-rise School of Design and Arts campus, Nonon Padilla adapted a short story by Gilda Cordero-Fernando (“The Dust Monster”) into a strikingly imaginative play called “Nuno sa Punso, BFF,” a meditative dramatization of a bored, neglected housewife’s flight to the fantastical.

The original short story already lent itself to magic realism, but Padilla’s direction took this into postmodernistic territory, moving its characters forward in time and back and positing alternative realities. At times, for this viewer, this was taken to a bewildering level (referencing Shakespeare and T. S. Eliot), but it all provided an exhilarating theatrical tour de force.

Guest actress Sherry Lara had a star turn as the aged Reve, but it should not detract attention from the sterling performances of the otherwise student cast. Unfortunately, no program notes on the cast was provided, but the young actress playing the main role of young Reve was outstanding.

The Far Eastern University Theater Guild’s “FEED,” written and directed by the group’s artistic director Dudz Terana, is not a conventional play but a kaleidoscopic mix of ensemble movement and dance, expressionist tableaus, multimedia graphics and even song.

These elements all revolve around the intersection of social media (the cast move about with lit-up cell phones held aloft) and issues ranging in theme and tone from facetious personal breakups to conflicting views on martial law and desaparecidos, to “My Way” rendered against expressive images. It was frequently eloquent, with effectively minimalist staging and evocative lighting, and performed by a disciplined young cast.

Some of its sequences admittedly went over my head, but in the end it came across as a haunting, affecting (and conceptually daring) experience, imaginatively relating millennials’ social-media world to social realities.

Revolving around the conceit of a women’s “sex strike” to force peace on the combatants, the production employed a no-holds-barred style of relentlessly sexual farce—visually (penises hanging from the men, outsized breasts on the women) and verbally (the graphic Filipino sexual terms drawing both gulps and laughter).

As directed by doyen TA director Ricky Abad, this was so energetically and unapologetically performed by the young cast that any qualms of prudery or taste must be swept aside by sheer entertainment. (This spirit of inspired near-pornographic buffoonery was perhaps best exemplified by the extended mating gymnastics so riotously conducted between the characters Carding, played by Earvin Estioco, and Mayet, played alternately by Blanche Buhia and Catherine Jane Lobangco.)

The adaptation, by students Gerald Manuel and Sabrina Basilio (the latter, in some performances, also played the central role of Lysistrata, alternating with Chase Salazar), was a quite effective marriage of slapstick fun and pointed social satire, intriguingly located in an indeterminate setting suggestive of, but not strictly identifiable with, Mindanao conditions.

In talk-backs afterward, they eloquently articulated their collaborative process with the cast and the philosophy behind it. One can have (as I do) reservations about specifics of the narrative, but the flow of the action and the portrayal of the individual characters were developed with panache and flair.

Particularly finely drawn and finely acted were the roles of the regal but cunning Lysistrata, the comically grandmotherly Nanay Menggay (Iman Ampatuan), and the hapless fall-guy vice mayor (Andre Alcantara).

At the end, the address by Lysistrata directly to the audience was an effective and moving device that broke down the fourth wall and invested the performance with the context necessary to lend it emphatic contemporary relevance. —CONTRIBUTED