“Somebody else owns the name ‘Eraserheads,’” producer Christine Manalang said. “We’re just using their songs; we can actually name who the composers are, but we cannot tag them as a group.”

Christine and husband Mark of the stage production outfit Ultimate Shows, Inc., are co-producing the show with RWM. Their branding solution is spot-on, but quite long—to promote the piece as “Ang Huling El Bimbo: A musical told through the songs of the most iconic ’90s Pinoy band.”

“When we say the title, everyone knows [the Eraserheads connection] anyway,” Manalang pointed out. 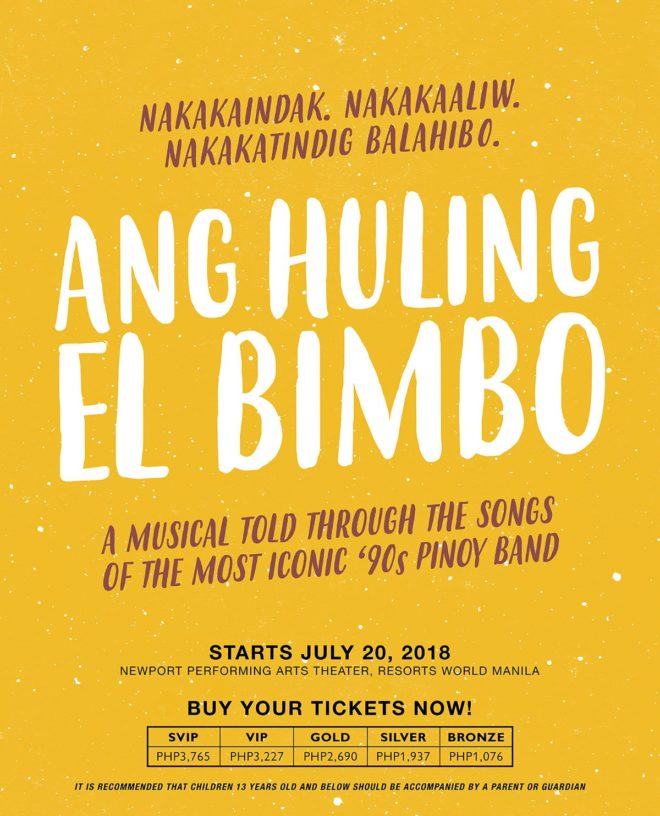 The cast, together with Shiela Francisco and Jamie Wilson, performed “With A Smile” and the title track at the recent launch at RWM.

The flashback format can be tricky, but director and choreographer Dexter Santos is hoping to pull it off. He is such as hardcore Eraserheads fan that he requires his students at University of the Philippines-Diliman to create an hour-long dance piece based on an Eheads song—in order to pass his Theater Arts class.

“It has been my lifelong dream to direct an Eraserheads musical, and it’s finally happening,” Santos said. “Their songs make up the soundtrack of our everyday lives, back when we we fell in love and got hurt for the first time, to the time we were having drinks with our barkada, or having one-on-one emo talks with our best friend.”

“El Bimbo” is a walk down pre-Wi-Fi memory lane. It is a sentimental narrative with a redemption arc, and Santos wants it to “resonate with our personal dreams and journey.” The takeaway, ideally, is for the audience to reach out to their friends after watching the show.

Santos clarified that “El Bimbo” is not an Eheads tribute; the band members are not in any way involved in the musical, but they are invited to watch. At least 20 Eheads songs will be featured, such as “Ligaya,” “Pare Ko,” “Alapaap,” “Poorman’s Grave”—songs that have become “part of the collective Pinoy psyche.”

Tasked with interweaving these tracks into the narrative is musical director Myke Salomon, who did excellent work incorporating Aegis hits in “Rak of Aegis” and Francis M. songs in “3 Stars & a Sun” (both productions of the Philippine Educational Theater Association).

Choosing and fitting Eheads songs into a musical narrative is a challenge, Salomon said. Directing the Manila Symphony Orchestra is another. And that is another thing to look forward to—hearing Eraserheads hits get the full orchestra treatment in the 1,500-seater Newport Performing Arts Theater.