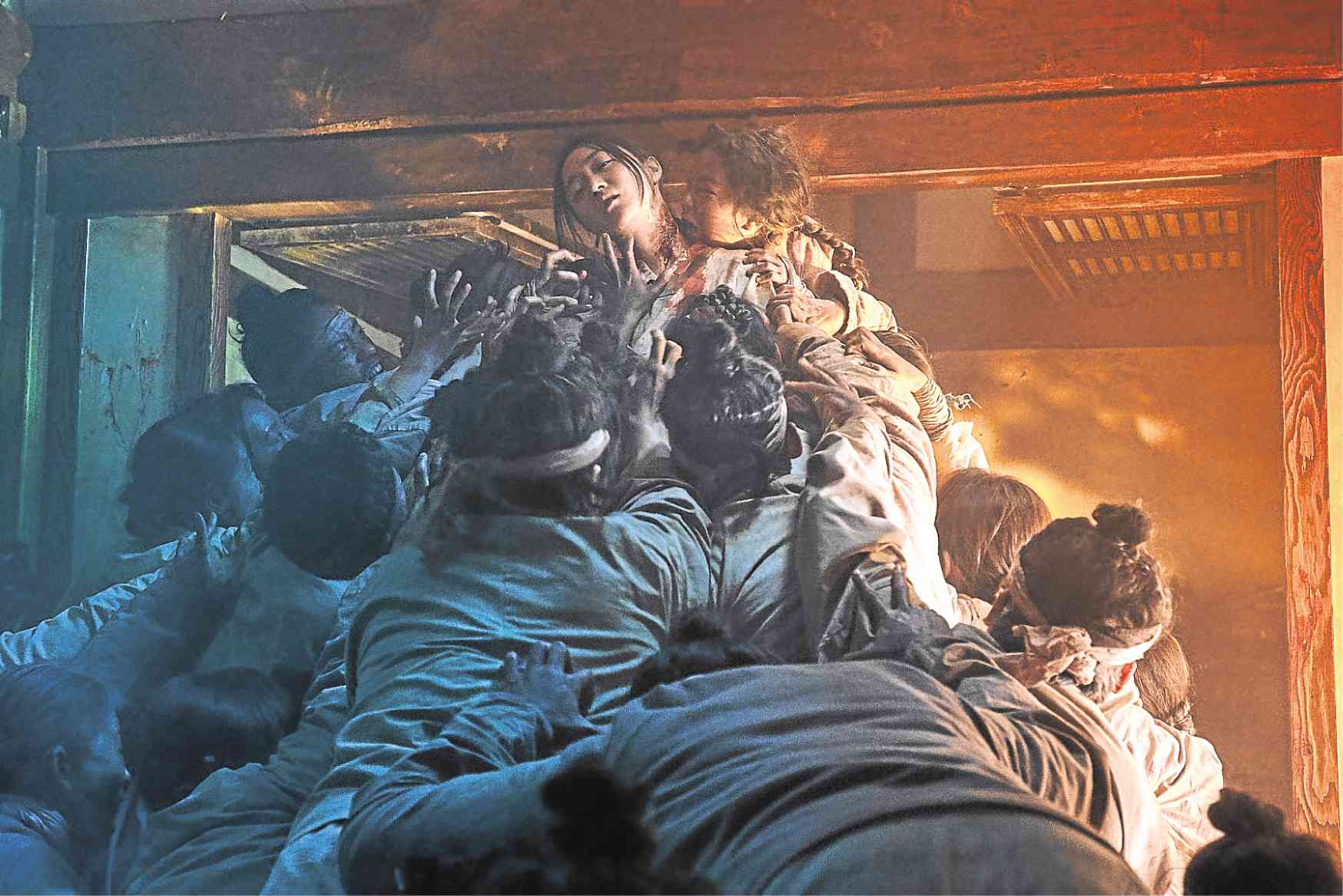 “Kingdom” promises to be violent, bloody and gory, something you will never see in Korean television.

GYEONGGI-DO, SOUTH KOREA—The temperature says 16°C, but the wind in the KOFIC Namyangju Studios makes it feel like it is negative 16. In the midst of the mountainous terrain and the lush green of springtime’s onset is actress Bae Doo-na.

She plays the role of a nurse named Seo-bi in Netflix Original series “Kingdom.” She is on a mission to find the cure for the zombie outbreak.

Doo-na is washing ginseng in a tub filled with dirty water. The wind makes her hair hit her face and the cold is brutal. However, there is no sign of her hurting while the camera is rolling. Only when it stops recording does she ask for lip balm to relieve her chapped lips.

“I am not an ace now,” she says to someone. She is obviously being told that she is an ace given that her body of work includes “Jupiter Ascending” and “Sense8.”

She jokes and laughs with the crew during a brief break before she is told that she has to do it all over again. She rolls her sleeves up, digs her hands into the tub without complaints and delivers her lines again.

“I got all the herbs you need,” said Jeon Suk-ho who plays Cho Beom-pal in the drama.

“I better get it myself so you can rest,” Doo-na answered.

This scene was one of the things Super was given access to during the visit of the set of “Kingdom” in March last year.  They were shooting the tail-end of the first season. Even director Kim Seong-hun and writer Kim Eun-hee is unsure if there will be a second back then. The cast were wearing their costumes when they met with the international press. Because it was a shooting day, the cast came in with their muddy shoes and blood on their clothes.

Everything about the trip was a secret. Even our bus and ID only says “Publicity” where the title of the show is usually printed. But the visit gave us the opportunity to have our lunch in the tent where the cast and crew eat their meals.  We were treated to delicious, hearty servings of soup, glass noodles, chicken and rice.

KOFIC Namyangju Studios is an open space in the mountain. It is an hour away from Seoul.  The place is used to build sets for films and series. We saw a tilted ark in the middle of nowhere on our way to the set of “Kingdom.” Because it is in the mountain, there is always a picturesque background of trees reflecting the colors of Korea’s four seasons.

Art director Lee Hoo-jyung was in-charge of touring us that day. He previously worked in the drama “Tunnel.” He showed us a hanok or Korean traditional house that they built for the show. We were shown a yangban hanok or a residence of a scholar or aristocrat.

“In ‘Kingdom’ this house is used by Lord Ahn Hyeon (played by Heo Joon-ho). It has 99 rooms. Each room’s size is three by three meters. It means this house is huge and represents a wealthy household. In Joseon, you cannot go beyond the 99 rooms,” Hoo-jyung told Super.

Its courtyard had cobblestone floors, keeping it from being muddy. Next to it is the ladies’ residence. During the Joseon era, the men and women have different living quarters.

He also pointed that the house has a two-meter foundation. The height of the houses also signifies wealth and social class of its owners. The houses of commoners are on the ground. The middle class and aristocracy’s houses are higher, but the highest of all is the king’s. Thus, we see several flights of stairs leading to the king’s residences in dramas.

“When I first received this project, my concern is that this is not only for the nation. This is going to be shown worldwide. In foreign films, they always show Japan or China. I wanted to show the images of Korea. The subject matter may be zombies in Joseon, but it also says a lot about social status,” he said. “Most of the zombies are lower class. I wanted to express the realities in royal court and how the lower class lived. I wanted to add as many Korean elements as possible.”

He worked closely with costume designer Gweon Yu-jin in bringing out the Korean elements in the show. They worked the colors to their advantage. For example, red and gold were reserved for the royalty while white and gray are for the commoners.

Because documents on Joseon era are limited, Hoo-jyung had to do research by visiting different palaces built during the Joseon period.  One of them is the Gyeongbukgung. Hoo-jyung was also the one who worked on the living and the zombies’ skintone, hair, teeth and blood.  He said that he had an interesting time doing that.

It is most unfortunate that we did not get to see a single zombie during our visit. But we will know if his research paid off as soon as “Kingdom” starts streaming on Netflix starting Jan. 25.