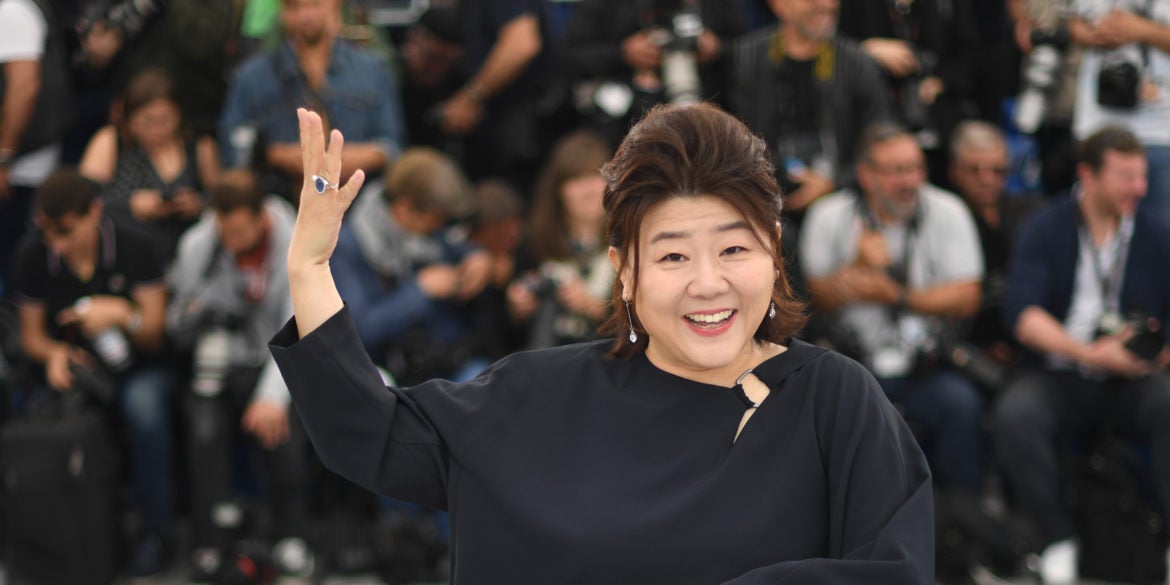 South Korean actress Lee Jung-Eun poses during a photocall for the film "Parasite (Gisaengchung)" at the 72nd edition of the Cannes Film Festival in Cannes, southern France, on May 22, 2019. (Photo by LOIC VENANCE / AFP)

By: Claire Lee via Agence France-Presse

The movie, a tragicomic tale about the widening gulf between rich and poor, is the 49-year-old’s third collaboration with director Bong Joon-ho.

She played the voice of a giant animal in Bong’s 2017 creature feature “Okja,” which competed unsuccessfully for the Palme d’Or that year, after playing a small role in Bong’s 2009 crime thriller, “Mother.”

“Director Bong has always a great eye for performers and has single-handedly launched (Bae Doo-na in ‘Barking Dogs Never Bite’) or reinvigorated (Kim Hye-ja in ‘Mother’) several careers in the past.”

In Bong’s latest family drama, Lee plays a live-in housekeeper for a wealthy family in Seoul, whose members become an obsession for a poor young man.

Although she seems to be a devoted servant, she turns out to have a few secrets up her sleeve, including an uncanny ability to imitate an excitable North Korean newsreader.

Lee started her acting career on stage in 1991, and made her film debut in 2001 with a small role in director Kim Yong-gyun’s romance drama “Wanee and Junah.”

But she developed a mental block while working for that film and didn’t return to cinema until 2009, the year she made her appearance in Bong’s “Mother.”

“I thought I’d never be able to do any TV or film work (again) because of my camera anxiety,” the actress said last year.

“The only way to overcome it was just to force myself to deal with the camera again and again. It worked out eventually.”

The actress is also known for memorising her lines by recording with her own voice and listening to them — rather than by reading — and having been active in pro-democracy student activism in the 1980s.

“The idea of equality is important to me,” the actress said last year.

“I think about it even when I’m at work. I think we get the best outcome when all staff members and actors work in an equal environment,” she said after a number of sexual misconduct allegations that have rocked the industry.

“Every time I choose the people to work with, I always look at their character and how they treat others.”

Bong has previously said he was deeply moved by Lee’s performance in a musical titled “Bballae” — meaning laundry — in which she played an old woman who raises her daughter with severe disabilities by herself.

“Lee was just phenomenal in the musical ‘Bballae.’ As she has already shown in musicals, Lee has an innate ability to control her voice,” said Bong in 2017, after the release of “Okja.”

“She spent so much time just watching documentaries on pigs, so that she could mimic their sounds as best as she could — I was impressed beyond words.”

“Lee’s steady stream of bit parts in large films may be replaced by more significant roles from here on out,” he said.