Surviving a beast of a race | Inquirer Lifestyle ❮ ❯ 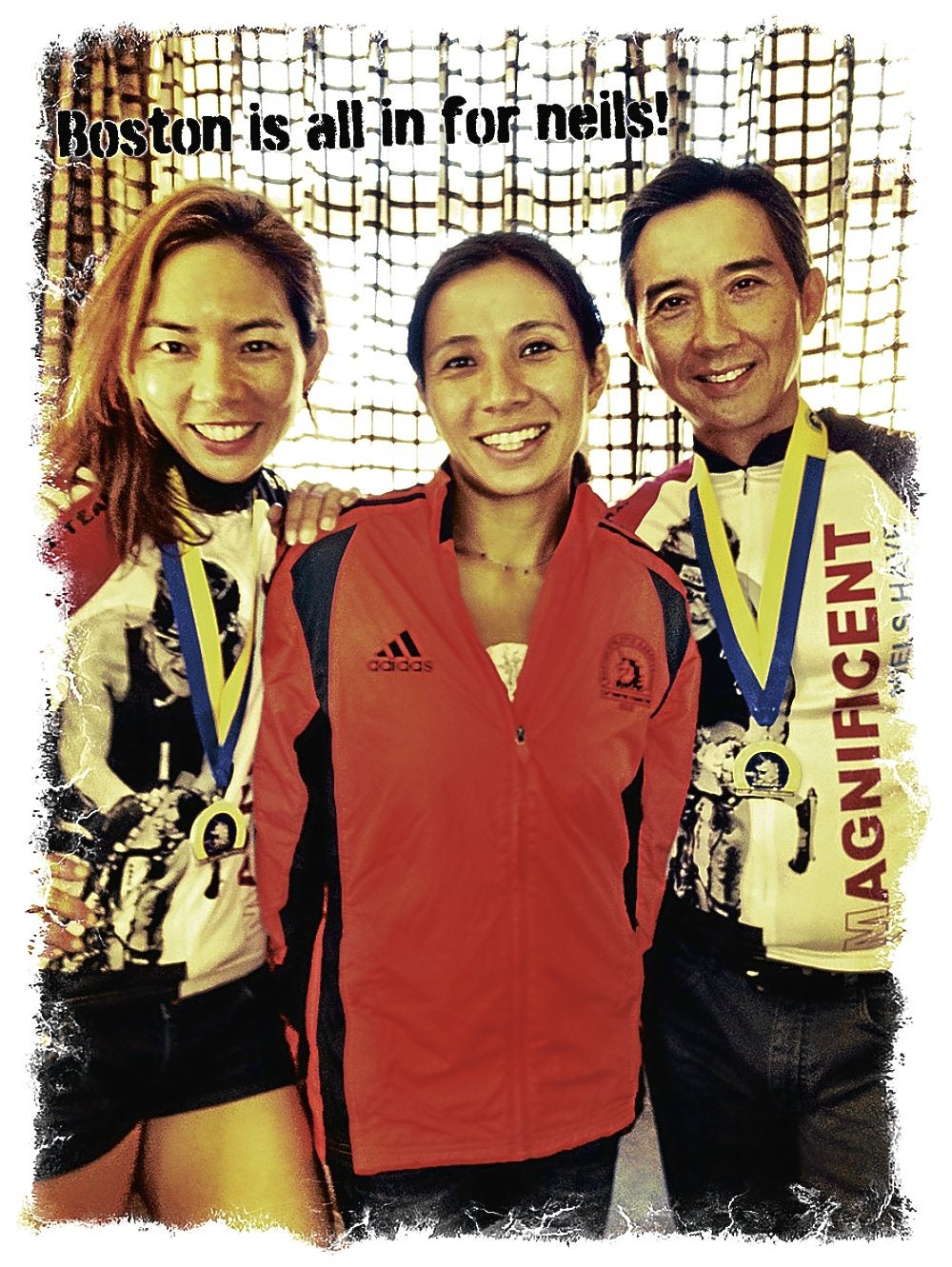 Surviving a beast of a race

I myself only realized the significance of those streets as being the final stretch before the finish line when I was reminded of them by Janet, my 61-year-old seatmate on my return flight from Boston to San Francisco.

She said, of all things in the Runner’s Expo, this was the only shirt worth buying. It was the purchase of a 13-time Boston Marathon veteran.  Janet has a career total of 59 marathons under her belt, all at sub 4. Her coach and personal friend is runner Dick Beardsley, who came in second during the infamous 1982 Boston Marathon, aka “The Duel in the Sun,” considered by most runners to be the most dramatic marathon finish ever. Temperatures hit 100°F that day.

The race was eventually won via a sprint to the finish by Alberto Salazar. He won by two seconds and collapsed at the finish line, needing six liters of water fed to him intravenously. Janet was almost as inspiring as my previous seatmate (more on that later). Suffice it to say that when I get to her age, I hope I can still run a 5K, much less qualify for Boston.

Janet still looked ravaged, 48 hours after the race, when she said: “This was a race that humbled me, I knew it had to happen one day, but I never thought it would happen in Boston. If anyone told me a week from Monday that I would be walking up Heartbreak Hill, I would have laughed in their faces. I am erasing this race from my Garmin (an elite brand of runner’s watch that records heart rate, pace, etc.) history.”

She ended the race by spending 30 minutes in the medical tent after crossing the finish line with a career worst time of 4:30—dehydrated, spirit crushed, feet bloodied, and her perfect sub 4 record shattered. Despite all this, hers was still one of the happier endings of the carnage that was the 116th Boston Marathon.

A cramp in my quads

I’ve run Boston once before in 2010, and back then, I was too busy fighting a cramp in my quads to notice street signs. But this time around, when I made that left onto Boylston for those final 600 m where you can actually see the finish line, I heard someone running/limping beside me say, “Oh, thank God, it’s almost over.”

“It was 69 degrees as wheelchair racers first crossed the starting line in Hopkinton at 9:17 a.m. By 12:30 p.m., the hottest temperature of the day recorded along the route was in Framingham at 89 degrees.” (Excerpt from Metrowest Daily News, April 2012)

While the wheelchair athletes were cruising down Hopkinton, back at the Athlete’s Village, Team Polo Tri Boston—Larry Ocampo, Manda (my sister) and I—were guzzling Gatorade, bananas, gel blocks and as much water as our bladders could handle in preparation for what would be an epic battle against not just the famous Heartbreak Hills but the record high temperatures!

We should have known from our sweat-soaked jerseys at pre-race  that this was a race that was going to ask each one of us to “dig pretty darn deep.”

Despite daily e-mails from the BAA (Boston Athletic Association) offering an option to defer for BM 2013, and admonitions from officials to treat this race as an experience, not a race, my plan A was to run the race at my usual pace—“all out.”

Despite the heat warnings, commentaries from doctors and professional athletes—e.g. “The heat affects everybody. Nobody runs fast in the heat. Nobody benefits from the heat”—I was still determined to push. I did not fly here for the clam chowder.

I was planning to use my heart rate (HR) monitor as a gauge for how hard to push. I have a pretty high marathon HR pace, around 159-165. I started the race on a downhill with my HR already at 167, and it never went down. By Mile 13, I was running amidst a sea of pain, as runners all around me were crumbling despite downing cups of water and Gatorade by the gallons.

The beautiful running forms of the first half had deteriorated to painful shuffles. Heads were bent down, counting steps, and I heard many a mumbled mantra sounding more like prayers. It was heart-wrenching to watch so many faces gritted in pain, my own probably closely mirroring theirs.

I watched my HR average at 174 spike up to 188 until Mile 18, where I decided to rip it off my chest  and run by feel. The numbers were too scary to watch, and the band around my chest was making it difficult to breathe. But even when I took it off, the vise grip on my chest  did not ease up. And no amount of Gatorade, salt tabs, cold water poured over my head or walking seemed to work.

As I was mentally debating whether I was going to keel over from a heart attack or heatstroke, I would also check my pace and internally negotiate with myself on how slow a pace I could realistically run/walk/crawl and still finish at a sub 4.

I was hoping that I would actually feel the downhill from Mile 22 and downshift my overworked heart, but it actually got worse! Here, the wheels literally came off. Each step felt heavier than the last. I have never walked so much during such a short  distance in any race. This race was really gutting me to a new level of sensation.

I tried to focus on other racers, but they looked pretty beat up as well. And at the end, it was the spectators who helped me cross that finish line. From grandfathers holding giant water hoses, kids holding out cups of ice, and mothers shouting genuine words of encouragement—it was their energy that kept me going.

At Mile 24, a tall, dark-haired stranger with a wet sponge grabbed me off the street, soaked my burning head, and gave me a solid shake, saying, “You’ve got this.” It could have been Jesus, come to think of it. I was burning up and getting lightheaded from exhaustion. My hearing was also beginning to go—a sure sign of fatigue and dehydration.

I was now part of the 116th Boston 2012, a race which will forever be remembered in the history books as having the slowest times and record number of deferrals.

So many thoughts went through my head during the most painful parts of the race. Why did I choose to run this race? And there were snippets of the conversation I had with my seatmate Meb Keflezighi on the flight to Boston from SF.

I did not recognize him when he first sat beside me, but I knew from his lithe physique—5’7”, 127 lbs and cheekbones that you could cut ice with—that he was a  runner. He also wore a beanie which said “Runner’s World.” He was humble enough to spell out his name a couple of times for me before I figured out who he was. At which point, I quickly texted my sister Amanda (also my sports guru of the sighting, who even took a quick photo).

After establishing that he actually was interested in conversation (not that I gave him much choice), we ended up chatting the whole flight. He was both generous and genuine. He shared many personal insights on running, and even showed me a couple of family photos and videos of him working out with his three children. Some highlights of our conversation were as follows:

“For any race, trust in your training and let your legs do the rest. Mental strategy-wise, ask yourself, if you knew that this was going to be the last time you would ever get to race, how would you choose to run it?”

I responded by asking him what his answer would be. He said: “I run to win.”

With an Olympic silver medal (Athens 2004) in his pocket, a 2009 New York Marathon win, and a personal best of 2:09:08, he says that he himself still has to conquer Boston. So I told him we had at  least this in common. He smiled and said that all runners have a bond, and share many things in common.

In saying this, he says, one of his favorite pre-race meals often consists of a peanut-butter-and-jelly sandwich. I had to laugh, because this is what I have eaten prior to some marathons.

How do you  recover from a major upset?

He says he reminds himself that he is “human” and trains harder for the next race.

When did you discover you were a runner?

“I ran seriously for the first time for a grade. I wanted an A in PE Class. It was a one-mile test, the course was over ramps, sidewalks, etc. I ran without strategy or training. I ran it at 5:30, then improved that time to 5:10. I was in seventh grade. (Note: His PE teacher Dick Lord called the San Diego County high-school track coach after seeing Meb’s times to say, “I’ve/We’ve got an Olympian here.”)

Just like quitting is forever, so is your posted Boston marathon time.

Race results don’t always reflect the training involved, as chance, accidents, bad weather, and even bad shellfish can alter anyone’s best-laid plans. The caliber of the races you choose to join already defines you. In joining Boston, I put myself on par with the best, in a course that has beaten better runners than I will ever hope to be, and despite recording my slowest finish time to date, this race reminded me again of why I love to run. There is a simple joy in running that matches the pain it can deliver stride for stride.

The option to defer was a real option for me, because I really wanted to run a Personal Best (PB) Boston race, since I’ve always felt that I let the course intimidate me the first time around. Did I really need the experience of running it again, and in extreme heat, no less? Did I need to know how much pain I could take? At 40+, did I need to know that I was still as capable of mentally and physically pushing it?

Every race or endeavor worth pursuing carries an element of risk.

Meb runs because he believes he was given this God-given talent, and it would be a shame to waste it. I run because it not only shows me what I am made of, but what I can become. To tweak what someone once said: “Courage begets more courage. Once you commit and stop hesitating, providence often moves in. And little steps become bigger steps.” That’s why and how you finish any marathon, even this particular beast of a Boston Marathon 2012.