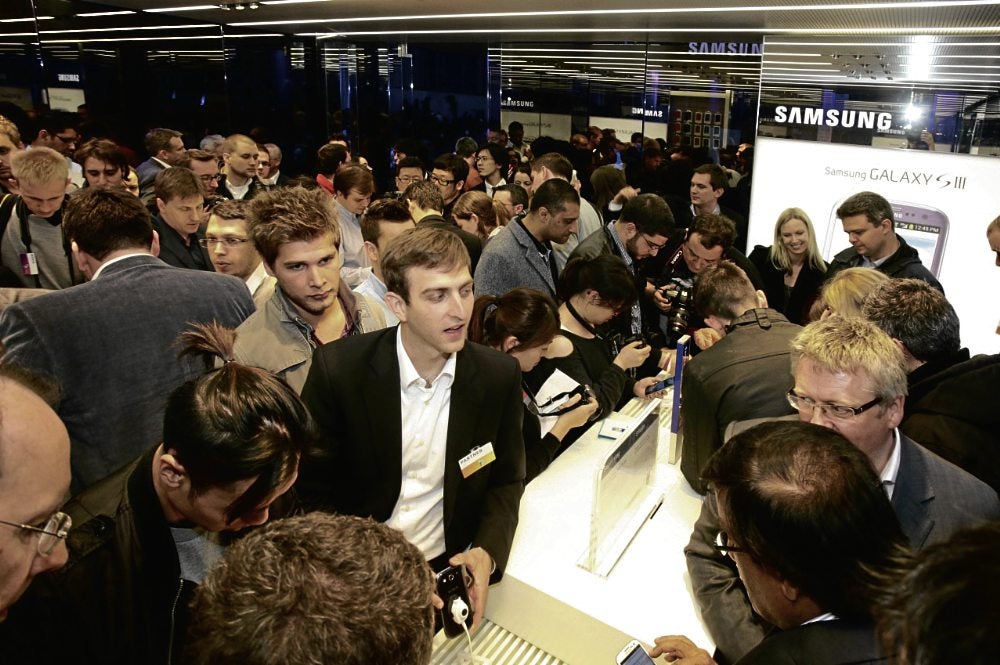 SAMSUNG was able to organize everything seamlessly, from the quick and easy registration, to the very attentive wait staff during cocktails and especially the product experience.

This smartphone promises a human touch

The Smartphone is not just a luxury anymore, but a necessity for most people in order to keep up with work and personal affairs even while on the go.

With each new model outdoing the last and with the next big thing coming every other month, how does one know which phone is right for his or her lifestyle?

May 3 marked the day many had been waiting for, as Samsung unveiled its newest offering, the Galaxy S III, in a huge 2,000-journalist-strong event held in Earl’s Court Exhibition center in London’s posh West End.

Samsung, whose tagline is “Designed for humans, inspired by nature,” suggests an answer to the technical frustrations of the non-savvy population of mobile-phone lovers.

At exactly 6 p.m., journalists, news anchors, bloggers and Samsung partners from all over the world poured into the reception hall to register for the big event. A seemingly logistical nightmare, Samsung was able to organize everything seamlessly, from the quick and easy registration, to the very attentive wait staff during cocktails all the way to the product experience, where everyone had the chance to tinker with the new Galaxy S III.

JK Shin, president and head of IT and Mobile Division at Samsung, gave the opening speech and unveiled the Galaxy S III phone to a wave of applause and excitement.

The smartphone game is a huge one, with everyone trying to outdo each other with their next big thing. Here are a few features you can expect from the S III:

One of the main features is the S voice, the advanced natural language user interface that not only listens to you, but responds to your requests as well. For instance, you can text, organize your schedules, listen to your music and even control the volume and take pictures just by verbally asking your phone to do it for you.

It also detects when you want to call someone you’ve been texting; all you have to do is simply lift the phone to your ear. Likewise, it also stays “awake” as long as you do so; your screen will never turn off until you close your eyes or look away.

Sharing is caring. Even with no Internet or phone signal, you are able to share photo and music files plus more just by touching another Galaxy S III phone. A 1GB movie file takes only three minutes or less and a 10MB music file takes just a few seconds. The AllShare Play feature allows you to send and share to your other devices, such as your tablet, smart television and laptop, instantly, no matter how far they are from you.

It’s great for people working on big projects, as the Group Cast feature allows others to see your screen and make comments and revisions as long as you are under the same WiFi network.

Perhaps one of the biggest temptations for those who own smartphones for the convenience of checking e-mail, social media and the like is the 4.8-inch large screen, for better quality when viewing photos or watching videos.

Speaking of which, the Pop-up Play feature allows you to continue watching a video anywhere on your screen while simultaneously doing other tasks. For those who rely on their phone to capture important moments, the Galaxy S III offers an eight-megapixel camera with zero-shutter lag so you can capture the exact moment that you want to.

It also has Burst Shot feature, which allows you to take 20 shots consecutively, and Best Photo feature, which automatically chooses the best picture taken out of eight shots.

The event ended with an invitation to test out the new smartphone, and everyone raced to get their hands on one. The Samsung Galaxy S III is truly a force to be reckoned with, and will be available in the Philippines by the end of May in two colors—Pebble Blue and Marble White.