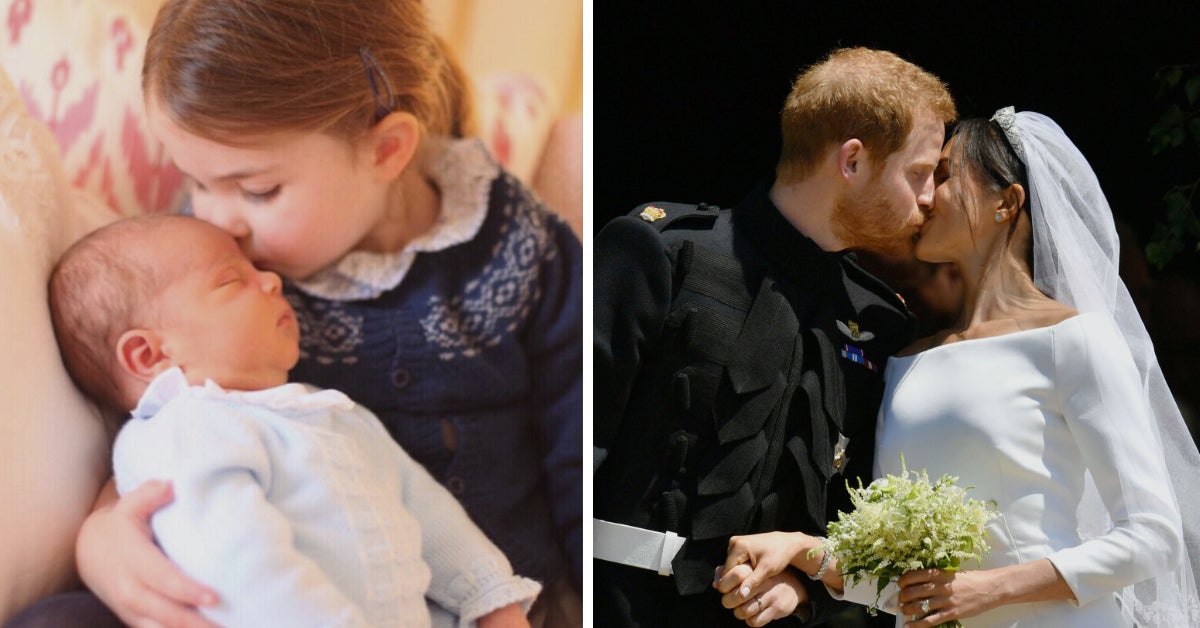 The British royal family is no stranger to scandal, having weathered negative press, family drama and anti-royalists as a long-standing institution.

In 2018, it had its own share of controversies, especially after it welcomed an American actress, Meghan Markle, into the fold. It had much to celebrate too, such as the birth of Prince Louis to Prince William and Kate Middleton, and more than one royal wedding.

Here are some of the royal family’s headline-making moments of 2018.

On Feb. 20, Queen Elizabeth II sat front row at the London Fashion Week alongside Anna Wintour in a surprise appearance. It was her first fashion week experience at the British capital, where she watched a show by designer Richard Quinn and presented him the “Elizabeth II Fashion Award” in recognition of new talent.

Will and Kate, Meghan and Harry make first official appearance

Months after Meghan and Harry announced their engagement in November 2017, the two appeared alongside Prince William and Duchess Kate at the Royal Foundation Forum on Feb. 28. During the event, each couple explained their charitable missions. Meghan shone as she spoke of empowering girls and women.

Kate gave birth to her third child with Prince William on April 23. The baby’s name was announced days after to be Louis Arthur Charles; the baby is fifth in line to the throne. Prince Louis is the youngest in the Duke and Duchess of Cambridge’s brood, which also consists of 5-year-old George and 3-year-old Charlotte.

Headline-worthy moments in Harry and Meghan’s wedding may need a list of their own. The couple wed on May 19 in Windsor in front of guests that included Serena Williams and Oprah Winfrey. Meghan’s only family member present was her mom, Doria Ragland.

Harry bit his lip as his bride walked down the aisle. The ceremony honored Meghan’s American roots with a gospel choir and an African-American Episcopal Church bishop.

Meghan Markle’s half-siblings, Samantha Markle and Thomas Markle Jr. have been on the offense — and offensive — about their younger sister and her relationship with Prince Harry. This year, Meghan’s dad Thomas Sr. joined in the fray just before he was set to walk her down the aisle.

Upon Samantha’s suggestion, Thomas Sr. staged paparazzi photos in a bid to improve his image. He missed his daughter’s May wedding reportedly due to poor health — a claim he made to American showbiz news outlet TMZ. Since her wedding, he and Meghan have become estranged.

He has since granted interviews to British media such as “Good Morning Britain”, The Sun and Daily Mail, where he has made attacks on the royal family and his daughter — while also begging Meghan to speak to him.

Meanwhile, Samantha has viciously criticized Meghan, her mom and the royal family on social media, has made appearances on British TV, and went to Kensington Palace to deliver a letter but was turned away.

A much less publicized union happened on Sept. 22: the intimate wedding of Queen Elizabeth II’s cousin Lord Ivar Mountbatten and his Scottish partner James Coyle in Bridewell Park. Members of the royal family did not attend, though the Queen’s youngest son, Prince Edward sent his well wishes. Lord Ivar’s ex-wife and his three children participated in the ceremony.

It was another royal wedding extravaganza when Princess Eugenie married her long-time beau Jack Brooksbank on Oct. 12 in Windsor Castle. Queen Elizabeth II’s granddaughter stunned in a deep v-neck gown both in the front and back, as she flaunted her scar from a surgery to correct her scoliosis. A-list guests included Demi Moore, Liv Tyler and Naomi Campbell.

Rumors swirled that Meghan had a baby bump during Eugenie’s wedding. She and Harry finally confirmed the news on Oct. 15 when they arrived in Sydney during their 16-day tour to Australia, Fiji, Tonga and New Zealand.

Prince Charles celebrated his 70th birthday on Nov. 14 with endearing portraits that featured his two sons and their respective families — including one version where they are caught laughing. He was also honored in a BBC documentary where William and Harry discussed how he instilled in them a love for the environment.

Before Meghan married into the family, she and Kate Middleton were supposedly friendly albeit “different,” Vanity Fair reported in March. In November, one British tabloid after another revealed alleged behind-the-scenes drama between the two women.

Despite the rumors, the women have shown solidarity. Kate said she was excited for Meghan’s baby in a Nov. 29 walkabout at the University of Leicester. On Christmas Day, they walked side by side and happily chatted among crowds in Norfolk. JB

LOOK: 6 celebrity kids with the most fun-filled travels in 2018